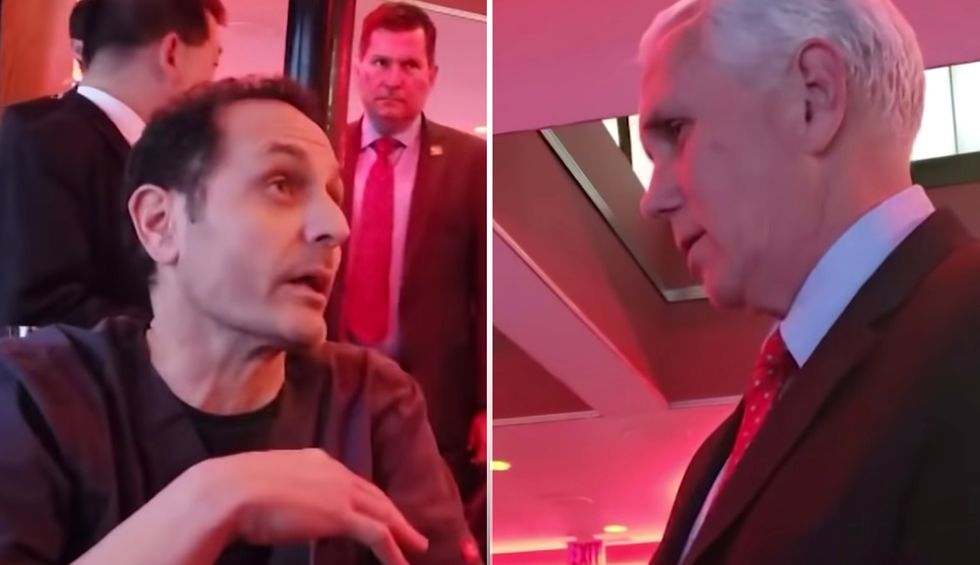 Vice-president Mike Pence was glad-handing at the Drake Diner in Des Moines, Iowa, last week when he encountered something that made him visibly uncomfortable—a well-informed citizen.

That citizen was an Emergency Room doctor of twenty years’ experience named Rob Davidson. Davidson works in the ER of one of the poorest, counties in rural, western Michigan. The encounter between Pence and Davidson was recorded on a cell phone, and is set forth below:

After Pence walks up to introduce himself, Dr. Davidson directly and respectfully asks him about the administration’s just-announced cuts to Medicaid as well as planned cuts to Medicare. Noting that a large number of his patients depend on Medicaid for their treatment in his ER, he asks Pence whether cuts to the program are a “good idea.”

“I confronted him about his damaging health care cuts because for me it's not about politics, it's about saving lives,” says Dr Davidson in a pair of tweets

The cuts referred to by Dr. Davidson are a policy change quietly implemented last week by the Center for Medicare and Medicaid Services. Under the new rules, bearing the Orwellian title of the “Healthy Adult Opportunity” initiative, block grants for Medicaid funding are to be provided to states. This would undo 55 years of Medicaid policy, and, as Medicaid and Medicare advocates contend, will allow individual states the flexibility weaken the program. By imposing a regime of block grants, the federal government would allow states to decide who and who not to cover, and what to cover at all.  The “block grant” initiative will also make the process more complex and confusing for Medicaid-eligible people, another deliberate effort by the Trump administration to reduce health care provided to poorer Americans. As noted here:

Spending caps would lead to limits on enrollment, which are barriers to care, would limit payment for care across all beneficiaries (even if the policy focuses on the expansion population), and would limit all types of benefits coverage —the opposite of furnishing medical assistance.

Back at the Drake diner, Pence at first says he hasn’t heard about any cuts to “Medicare,” then pivots to what he did as Governor of Indiana, specifically his decision to accept Medicaid expansion for his home state under the Affordable Care Act. Apparently oblivious to the contradiction between his own actions as governor and the actions of the Trump administration, he then resorts to some mushy non-verbiage about “reform” of the Medicaid system.

Davidson, undeterred, proceeds to pepper Pence with questions about the cruelty of administration policy towards the poor. Pence is visibly unable or unwilling to justify that policy and tries to simply sidestep the entire issue by referring back to his term as Indiana governor. But Davidson doesn’t let him get away with that, and tells him he’s referring to the actions of the Trump administration.

“When I told him he is putting my patients' lives at risk, @VP deflected and denied knowledge of the policy. He either doesn't understand, or doesn't care about the impact of this administrations' policies on patients everywhere.”

Pence then tells Dr. Davidson—who is, again, a practicing ER doctor in Western Michigan-- that he is “oversimplifying” the subject.  And again, Davidson rebuts him:

In the end Pence tells Dr. Davidson that he “respectfully” disagrees with his opinion and makes his escape.

Medicaid currently  covers over 70 million American lives, “including nearly 4 in 10 children, half of all births, and almost two-thirds of those living in nursing homes.” As explained by Nicole Huberfeld, a professor of health law at Boston University, this effort to bypass the federal government’s role is “the latest example of the Trump administration’s hostility toward Medicaid, particularly Medicaid expansion under the ACA.”

Which makes Pence’s defense of his administration’s policy by referring back to his own home state’s expansion of Medicaid under the ACA ( effected under his own governorship), even more perverse. But this is the type of blithe, careless double-talk we have grown to expect from an administration that truly doesn’t give a damn about the American people.