Trump’s rhetoric is shaping a generation of bullies 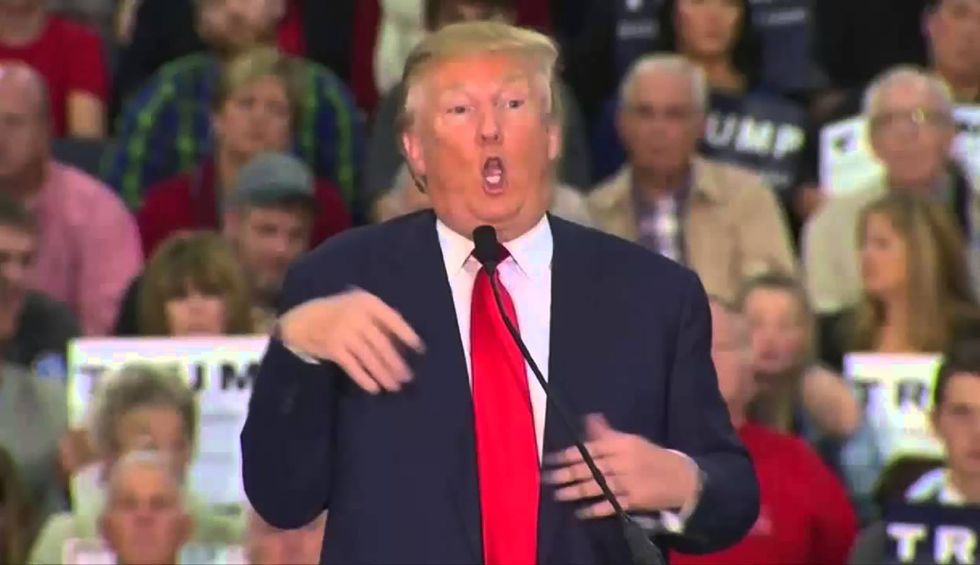 Imagine your kindergartner comes home in tears because a group of other kindergartners surrounded her, shouting horrible things like “Go back to Mexico!” and “Get ready to be deported.” Imagine your middle-schooler gets off the school bus in the afternoon and won’t speak to you or anyone else. Later, he tells you that kids he thought were his friends formed a “wall” in the hallway by linking their arms together and wouldn’t let him near his locker to get his books. Why? Because he wasn’t white, the boys said. Maybe your son, whom you proudly sent off to a new school that morning, all nervous but excited, discovered that nobody would sit beside him in class because you’d unwittingly moved to “Trump Country.” Imagine you’re a student forced to watch his own mother beaten unconscious by a 13-year-old who had told you, just the previous day, to “go back behind the wall.”

Then imagine what it must be like to realize that these foul acts were instigated by the president of the United States. The same president your next-door neighbors voted for. The same neighbors who wave to you as they blithely stroll down their driveway in the morning to pick up the paper.

A recent Washington Post investigation—artfully titled, “Trump’s words, bullied kids, scarred schools”—will make you cry, or make you furious. It’s no revelation that Donald Trump deals in race-baiting and demonization of people of color, immigrants, people of non-Christian faith, and more. The Post examined just how deeply Trump’s rhetoric—demonstrated most callously before crowds of baying supporters—has infected our nation’s schools. Since Trump-related bullying has never been specifically surveyed before, the Post relied on a review of publicly reported news stories. It found a systemic shift in the language that bullies now use to target children at school, noting “kids as young as six mimicking the president’s insults and the cruel way he delivers them.” Since the start of the school year in 2016, the Post has found 300 reported instances in which “Trump’s words, those chanted by his followers at campaign rallies, and even his last name” have been hurled by children at other children. The vast majority of these attacks were directed against Hispanic, African American, and Muslim children; a small proportion of children have also been attacked for supporting Trump.

The Post’s review revealed that, while children were being victimized because they support Donald Trump, the number of kids who’ve been bullied, beaten up and harassed by children influenced by Trump outnumber his supporters by a factor of seven to one. In an ideal world, no kid should be bullied. Ever. The reality? If someone wasn’t constantly, deliberately, and maliciously modeling racist and xenophobic behavior on the news on a near-daily basis, none of these kids would have suffered the torment that they are all being put through in this way. This dangerous trend is solely on Donald Trump, and no one else.

The many, many examples culled by the Post document the Trump-inspired transformation of even very young children into seething repositories of newly minted hate. They parrot Trump’s campaign rhetoric in the faces of their classmates. They chant racist slogans at school sporting events, cursing at, heckling, or singling out kids to be ostracized because of their skin color or ethnic background. One of the most tragic aspects of this—and there are a lot of tragic aspects—is that most if not all of these kids are too young to know exactly what they are doing and saying. Most are too young to have any inkling of the harm they are inflicting, both on their victims and, ultimately, on themselves.

One girl from rural Idaho took to Twitter to criticize what she saw as hypocritical Trump supporters who demonize Mexicans but choose to vacation in Mexican resorts such as Cancun. When she arrived at school the next day, Ashanty Bonilla, then 16, immediately found herself surrounded by boys she had known most of her childhood calling her a “fucking Mexican” and an “illegal.” Both African American and Mexican American, Bonilla had struggled for years to fit in in her 94% white hometown. After some of the same boys defaced her car, even tying it to another car with a rope, Bonilla stopped attending classes. She began to have migraines and panic attacks. Ultimately, she swallowed a bottle of painkillers and was rushed to a hospital in Spokane, over 100 miles away. She survived, but now sees a therapist to cope with the experience.

Bonilla understands why it happened. “It’s gotten way worse since Trump got elected. They hear it. They think it’s okay. The president says it ... Why can’t they?”

Sporting events in particular provide fertile ground for Trump-inspired hate speech. The Post article documents numerous instances of slurs being chanted by groups of children and aimed at children of color on opposing teams—including one group of African American varsity volleyball players who were called “monkeys” and urged to “go back where [they] came from.” These slurs were delivered after Trump punched out one of his tweets attacking African American and Hispanic congresswomen in similar language.

The problem isn’t limited to students. Some teachers are channeling and justifying their own pathological insecurities through Trump as well. One day after Trump won the election, a Florida high school sophomore and two friends were told by a teacher that Trump would send them “back to Africa.“ Also shortly after the election, a physical education teacher threatened one of his students, saying Trump would soon deport him. In Texas, a school employee told a Latino student that Trump was “working on a law” to deport him, citing his “mom’s status.” The student was a U.S. citizen.

A Fort Worth, Texas, teacher, Georgia Clark, ordered her black and Latino students to sit in the back of her classroom and railed against immigrants and the supposed “violence” they bring to this country; Clark also said that she would call the FBI to deport them. She was ultimately fired for tweeting an appeal to Trump himself asking that he help her deport undocumented immigrants from Fort Worth schools. Clark is appealing the decision and was reinstated on what the school district called “procedural” grounds; as of December, the Fort Worth ISD planned to appeal her reinstatement. Meanwhile, at least one student was forced to switch schools after reporting Clark’s behavior.

American schools are now averaging two Trump-inspired hate incidents per week, again, based solely on public reporting. As the Post acknowledges, this likely represents only a tiny fraction of actual events. Unreported instances, it says, are far, far more numerous than that already-shocking number would indicate, because many kids don’t want to admit to being victimized, and many parents don’t want to publicize it. Instead, these students are forced to cope with the hate instigated by Trump and doubtlessly amplified by his Fox News-addicted supporters. Significantly, the Post article does not include the spread of slurs and racial epithets that kids are now spewing at people of color on a daily basis without mentioning the name of the president; for the most part, these incidents, which cannot be directly linked to Trump, are not publicized as much.

Those who attend Trump’s rallies and cheer and guffaw as he demonizes Muslims and people of color probably never consider (or care about) the influence this language has on children, particularly when repeated by parents or even teachers. Nor do these red-hatted rally attendees likely stop to think about how this coarse hate speech is imitated and then weaponized on social media, which is now used by the majority of school-age children.

Of course, these children are not learning to inflict this type of hate speech in a vacuum. It’s more than obvious that they are taking their cues not only from direct exposure to “presidential” rhetoric, but from their parents as well. The Post notes that efforts are being made at schools across the nation to impress upon children that Trumpian speech is not okay, that it’s not normal, and that all students are entitled to the same respect and decency that they would insist upon for themselves. For some schools, this has resulted in an opportunity to step up their diversity and inclusion efforts, even as they struggle to protect students from the new White House-inspired bullying and abuse.  Still, one school administrator describes the Trump hate speech as a something warranting nearly a ”crisis” response, as the corrosive bigotry inflicted by this abominable president continues to infect the most vulnerable and impressionable members of our society.

There is nothing quite as painful in life as being bullied as a child, and there is nothing more despicable than a president whose heedless rhetoric has made the agony of bullying even worse by validating hate. This kind of cruelty has no business in the Oval Office, but there may be a special place in hell reserved for such a monstrous person. And if there isn’t, there should be.