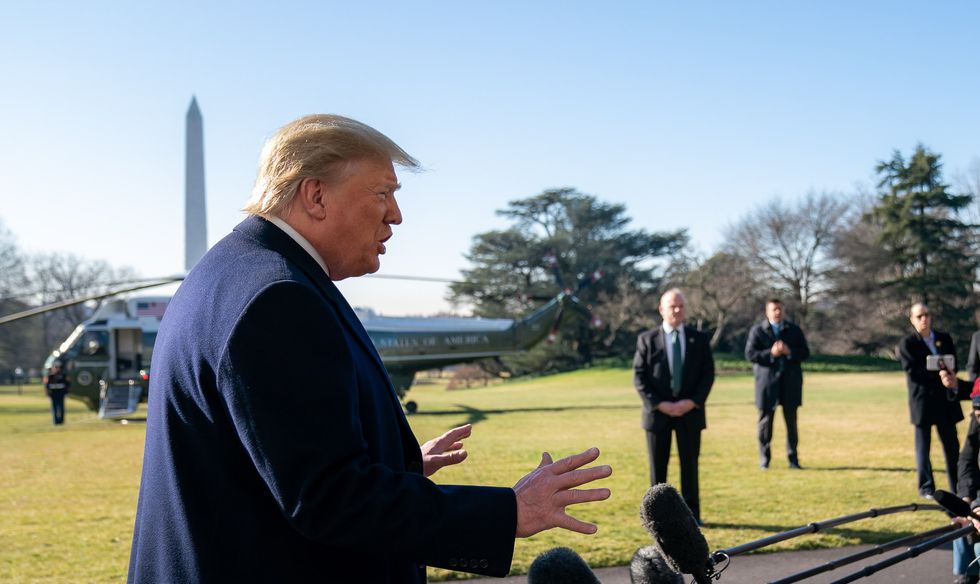 President Donald J. Trump stops to talk with reporters outside the South Portico of the White House Sunday morning, Feb. 23, 2020, prior to boarding Marine One to begin his trip to India. (Official White House Photo by Tia Dufour)
Cody Fenwick
February 26, 2020

When he was a private citizen in 2014, Donald Trump railed against President Barack Obama about the unfolding Ebola crisis, even though the outbreak never had a major impact on the United States mainland. But with a keen instinct for political winds, Trump rightly saw that the Ebola news could be effectively weaponized against the president. For all his many failings, then, one might have hoped that President Trump would be highly attentive to the possibility that a significant pandemic — in an election year — could hurt his own political standing, and he would have a strong incentive to implement a strong response.

But as the outbreak of a new strain of coronavirus — called Covid-19 — emerges as an increasingly serious threat, Trump and his administration are clearly bungling the response. Indeed, while Trump's 2014 response to Ebola might have led one to believe he would likely overreact to a disease outbreak under his watch, there's every indication that he's underreacting now.

In part, it seems, this is because Trump is hoping he can defuse the impact of the outbreak on his own fortunes through force of will. So even as fears about the outbreak sent stocks tumbling on Monday, Trump tweeted that the stock market is "starting to look very good," in complete defiance of reality. It had had its worst day in about two years. On Tuesday, it slid further, as MarketWatch reported that the market had "its sharpest-ever two-session slide in point terms, losing about 1,910 points, according to Dow Jones Market Data."

As I argued Monday, Trump's blatant lie about the stock market was dangerous and disturbing, given that the American people will have to turn to the government for accurate information about the outbreak in order to keep safe.

The Washington Post had recently reported that Trump was shaping his reaction to Covid-19 in order to keep the markets reassured:

Worries about rattled financial markets and their effect on the economy as well as the delicate negotiations with China over a trade deal — a key to Trump’s reelection — have played a large role in influencing the president’s friendly posture toward China over the deadly coronavirus, according to several senior White House and administration officials. Trump has heralded Xi’s leadership and “discipline” in responding to the outbreak.

At some point, though — perhaps now — this strategy could backfire. The market looks to the government for information about the state of the world, so if Trump suddenly ramped up the coronavirus response, that could trigger investors to conclude that the outbreak is even worse than it appears. But if it seems Trump is underplaying the response, that could spook the market even more, since it would indicate that the U.S. government isn't prepared to manage the fallout.

And on Tuesday, it became clear that the Trump administration can't even get its story straight about what's happening.

Acting Homeland Security Secretary Chad Wolf, for example, said a vaccine could be developed within months. But Health and Human Services Secretary Alex Azar said it would take at least a year for the vaccine to be developed and that the shorter timeline has no precedent. (Wolf, more broadly, simply seemed woefully uninformed about the situation in testimony before Congress on Tuesday.) Larry Kudlow, director of the United States National Economic Council, said Tuesday taht the virus had been contained, "pretty close to airtight." But the Centers for Disease Control and Prevention said Americans should be prepared for the infection to spread across the country.

Aside from the mixed messages — which really are dangerous in their own right — the Trump administration is making substantial tactical errors in limiting the spread of the virus. As Vox's Matt Yglesias noted:

Late last week, the US government overruled objections from the Centers for Disease Control and Prevention to put 14 coronavirus-infected Americans on an airplane with other healthy people.

The Trump administration swiftly leaked that the president was mad about this decision, and that nobody told him about it at the time. That could be true (or not — Trump and his team lie about things all the time). But even if it is true, it’s a confession of a stunning level of incompetence. The president is so checked out that he’s not in the loop even on critical decisions and is making excuses for himself after the fact.

Yglesias also pointed out that Trump withdrew U.S. resources from dozens of low-income countries meant to fight pandemics, a choice the United States could come to regret as a global crisis inevitably impacts the homeland.

And many other decisions the Trump administration made long before the emerging outbreak have likely hindered the country's ability to respond internally. Economist Paul Krugman pointed out in an email newsletter:

...the Trump administration seems both woefully and willfully unprepared to deal with a public health crisis. President Obama created a global disease “czar” to deal with Ebola; Trump eliminated the position, and substantially cut funding for the Centers for Disease Control, because his administration didn’t consider pandemics a significant national security threat. So who’s going to take charge if things get really scary? Jared Kushner?

The administration is now asking Congress for $2.5 billion to aid in the emergency response. But as Politico reported, this doesn't seem to be nearly enough:

All of this paints the picture of an administration unprepared and unable to fulfill key duties in keeping American citizens safe. And nothing about Trump's performance as president thus far should give anyone the confidence that he has the ability to right this ship.