Trump is a symptom of the rigged system that was already dividing us: Robert Reich 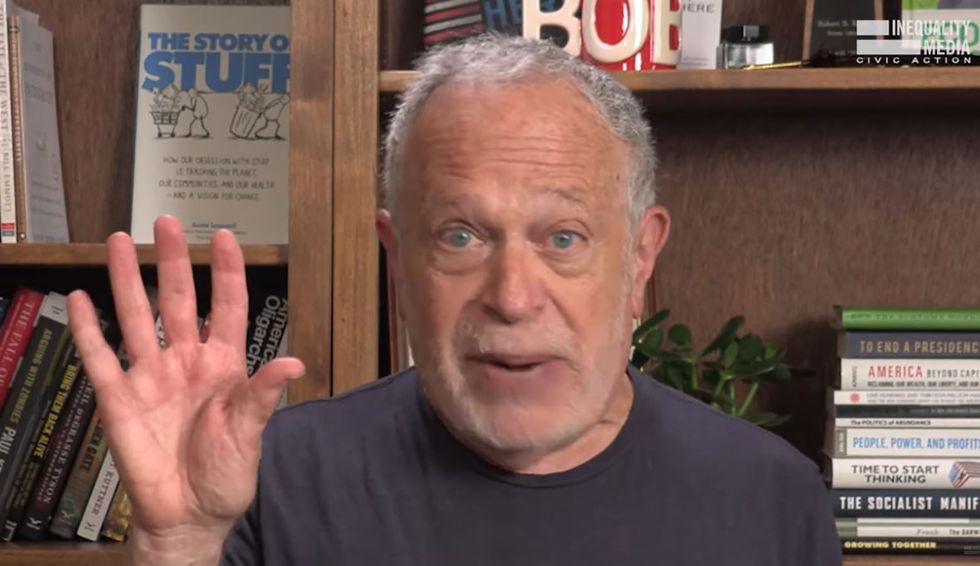 An impeached president who was on trial and is up for re-election will be delivering a state of the union address to the most divided union in living memory. He will be giving his address to both his jurors and prosecutors, and most importantly, to the voters that will decide his fate in November.

It’s not unprecedented for an impeached president to give a state of the union address. Bill Clinton delivered his State of the Union in 1999 while in the middle of his Senate trial. But that’s where the similarities end.

Clinton was not up for re-election when he gave his speech, so he didn’t need to employ any campaign-style rhetoric. Trump is a polarizing, divisive president who is addressing an America that has never been so divided.

But this begs the question: why are we so divided?

We’re not fighting a hugely unpopular war on the scale of Vietnam. We’re not in a deep economic crisis like the Great Depression. Yes, we disagree about guns, abortion, and immigration, but we’ve disagreed about them for decades. So why are we so divided now?

Ferocious partisanship is not new. Newt Gingrich, the Republican Speaker of the House who led the House’s impeachment investigation into Clinton, pioneered the combative partisanship we’re used to today. But today’s divisions are far deeper than they were then.

Part of the answer is Trump himself. The Great Divider knows how to pit native-born Americans against immigrants, the working class against the poor, whites against blacks and Latinos, evangelicals against secularists — keeping everyone stirred up by vilifying, disparaging, denouncing, defaming, and accusing others of the worst. Trump thrives off disruption and division.

But that begs another question: Why have we been so ready to be divided by Trump?

One theory is the underlying tension that an older, whiter, and less educated America, concentrated in rural areas, is losing out to a “new” America that’s younger, more diverse, more educated, and concentrated in urban areas. These trends, while much more prominent these days, have been going on since the start of the 20th century. Why are they causing so much anger now?

Another hypothesis is that we are geographically sorting ourselves into Republican and Democratic regions of the country, surrounding ourselves with like-minded neighbors and friends so we no longer talk to people with opposing views. But why are we doing this?

The rise of social media sensationalizing our differences in order to attract eyeballs and advertisers, plays a crucial role in exacerbating the demographic and geographic trends I just mentioned. But it alone isn’t responsible for our polarized nation.

Together, all of these factors contribute to the political schism we’re experiencing today. But none of them alone point to any large, significant change in the structure of our society that can account for what’s happened.

Let me have a go.

In the fall of 2015, I visited Michigan, Wisconsin, Ohio, Pennsylvania, Kentucky, Missouri, and North Carolina for a research project I was doing on the changing nature of work. I spoke with many of the same people I had met twenty years before when I was secretary of labor, as well as with some of their grown children.

What I heard surprised me. Twenty years ago, many said they’d been working hard and were frustrated they weren’t doing better. Now, that frustration had been replaced by full-blown anger — anger towards their employers, the government, Wall Street.

Many had lost jobs, savings, or homes in the Great Recession following the financial crisis of 2008, or knew others who had. By the time I spoke with them, most were back in jobs but the jobs paid no more than they had two decades before in terms of purchasing power.

I heard the term “rigged system” so often I began asking people what they meant by it. They spoke about flat wages, shrinking benefits, and growing job insecurity. They talked about the bailout of Wall Street, political payoffs, insider deals, soaring CEO pay, and “crony capitalism.”

These complaints came from people who identified as Republicans, Democrats, and Independents. A few had joined the Tea Party, while a few others had been involved in the Occupy movement.

With the 2016 political primaries looming, I asked them which candidates they found most attractive. At the time, Democratic Party insiders favored Hillary Clinton and Republican insiders favored Jeb Bush. Yet no one I spoke with mentioned Clinton or Bush.

They talked instead about Bernie Sanders and Donald Trump. When I asked why, they said Sanders or Trump would “shake things up” or “make the system work again” or “stop the corruption” or “end the rigging.”

In the following year, Sanders – a seventy-four-year old Jew from Vermont who described himself as a democratic socialist and wasn’t a registered Democrat until the 2016 presidential primaries – came within a whisker of beating Clinton in the Iowa caucus, routed her in the New Hampshire primary, and ended up with 46 percent of the pledged delegates from Democratic primaries and caucuses.

Trump – a sixty-nine-year-old ego-maniacal billionaire reality-TV star who had never held elective office or had anything to do with the Republican Party and who lied compulsively about everything – won the Republican primaries and then went on to beat Clinton, one of the most experienced and well-connected politicians in modern America (although he didn’t win the popular vote, and had some help from the Kremlin).

Something very big had happened, and it wasn’t due to Sanders’s magnetism or Trump’s likeability. It was a rebellion against the establishment.

That rebellion is still going on, although much of the establishment still denies it. They have come up with myriad explanations for Trump’s ascendance, some with validity; some without: It was hatred of Obama, it was hatred of Hillary, it was people voting third party, it was racism and xenophobia.

It’s important to note that although racism and xenophobia in America date to before the founding of the Republic, they have never before been so central to a candidate’s appeal and message as they’ve been with Trump. Aided by Fox News and an army of right-wing outlets, Trump used the underlying frustrations of the working class and channeled them into bigotry, but this was hardly the first time in history a demagogue has used this cynical ploy.

Trump convinced many blue-collar workers feeling ignored by the powers that be that he was their champion. Hillary Clinton did not convince them that she was. Her decades of public service ended up being a negative, not a positive: She was indubitably part of the establishment, the epitome of decades of policies that had left these blue-collar workers in the dust. (It’s notable that during the primaries, Bernie Sanders did far better than Clinton with blue-collar voters.)

A direct line connects the four-decade stagnation of wages with the bailout of Wall Street, the rise of the Tea Party (and, briefly, Occupy), and the successes of Sanders and Trump in 2016. By 2016, Americans understood that wealth and power had moved to the top. Big money had rigged our politics. This was the premise of Sanders’s 2016 campaign. It was also central to Trump’s appeal (“I’m so rich I can’t be bought off”), which he quickly reneged on once elected, delivering everything big money could have imagined.

The most powerful force in American politics today continues to be anti-establishment fury at a rigged system. Vicious partisanship, record-breaking economic inequality, and the resurgence of white supremacy are all byproducts of this rigged system. The biggest political battle today isn’t between left, right, or center: it’s between Trump’s authoritarian populism and democratic (small “d”) populism.

Democrats cannot defeat authoritarian populism without an agenda of radical democratic reform, an anti-establishment movement that tackles runaway inequality and heals the racial wounds Trump has inflicted. Even though he’s a Trojan Horse for big corporations and the rich – giving them all the tax cuts and regulatory rollbacks they’ve ever wanted – he still has large swaths of the working class convinced he’s on their side.

Democrats must stand squarely on the side of democracy against oligarchy. We must form a unified coalition of people of all races, genders, sexualities, and classes, and band together to unrig the system. Trump is not the cause of our divided nation; he is the symptom of a rigged system that was already dividing us. It’s not enough to defeat him. We must reform the system that got us here in the first place to ensure that no future politician will ever again imitate Trump’s authoritarian demagoguery.

For now, let’s boycott the State of the Union and show the ratings-obsessed demagogue that the American people refuse to watch an impeached president continue to divide us.