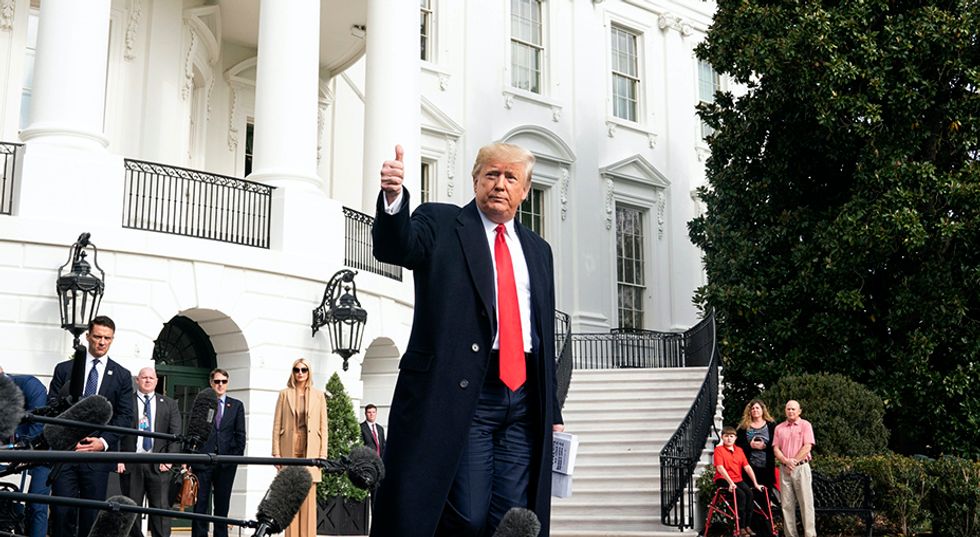 President Donald J. Trump gives a thumbs-up as he walks to board Marine One after speaking to reporters outside the South Portico of the White House Wednesday, Nov. 20, 2019, to begin his trip to Austin, Texas. (Official White House Photo by Joyce N. Boghosian)
Mark Sumner
and
Daily Kos
February 18, 2020

Are you a crooked politician or investment bigwig? Have you been convicted of fraud, bribery, and extortion? Well COME ON DOWN to Dandy Don's House of Pardons! Impeached? No problem! Removed from office? Not an issue! Or, really, it is an issue … but in a good way! Because poking a big fat one in the eye of justice is the whole damn point. Yes, Donald Trump has commuted the sentence of former Illinois governor Rod Blagojevich. Because showing everyone that justice is not even a concept any more is the order of the day.

And Blago isn’t either the beginning or the end of the day of justice doesn’t apply to big shots. Whether it’s an NFL owner who took part in a bribery and gambling scheme, or a former chief of the New York Police Department who was convicted on nine counts of tax fraud, today is the day when Trump gives a big middle finger to justice. Again.

Trump started the day by pardoning Edward DeBartolo. DeBartolo was the former owner of the San Francisco 49ers who tried to get into the casino business in 1991, before getting tangled up with crooked Louisiana governor Edwin Edwards. Edwards asked for a bribe for a gambling license. DeBartolo lied to federal regulators about this detail. In 1998, DeBartolo was convicted for taking part in an extortion scheme and gave up control of the 49ers, but that didn’t stop him from being planted in the Pro Football Hall of Fame, and it didn’t stop Trump from pardoning him.

But it now appears that DeBartolo was just an appetizer for a giant day of “FU laws!” Because Trump didn’t stop there. In the afternoon, Trump decided that he was going to commute the sentence of Blagojevich. What was it that Blagojevich did again? Ah, he called around to potential candidates and tried to sell off Barack Obama’s open Senate seat to the highest bidder. And he was caught on the phone doing it. In other words — a perfect call.

The New York Times mentions that staffers in the White House told Trump not to pardon Blagojevich because his actions “epitomizes the corruption that Mr. Trump had said he wanted to tackle as president.” But that only shows how backwards everyone has been getting this whole “swamp” thing.

What is corruption after all if not just fighting against government oversight and regulations? Bribery and extortion for the win! Besides, Blagojevich was a contestant on Celebrity Apprentice and the ratings really popped. What’s more important than taking care of your TV pals?

To hammer home the point, Trump also plans to pardon former New York City police commissioner Bernard Kerik. Kerik pleaded guilty to perjury, ethics violations, tax fraud … pretty much every damn thing imaginable after pocketing a quarter-million bribe from an Israeli billionaire. Then he didn’t report the money. Then he lied about the money. Then he pleaded guilty to eight felony counts. In other words — nothing Trump, or Paul Manafort, or Roger Stone, or anyone else in his circle wouldn’t do.

Besides, Kerik worked for … who was that guy again? Oh yeah, Rudy Giuliani. In fact, Kerik and Giuliani were a mutual support society post-9/11, constantly singing each other’s praises. Kerik was as critical in Giuliani’s rise to “America’s mayor” as Giuliani was in getting Kerik considered “America’s top cop” on his way to a serious of federal posts. So there’s little doubt how that name got on Trump’s list.

And to round off the day, Trump is also handing a pardon to junk bond gazillionaire Michael Milken. Way back in 1989, Milken pleaded guilty to six felony charges for securities fraud and paid $600 million in fines. Handing over that big check allowed Milken to plead guilty, but to dodge more significant charges of racketeering or insider trading. Milken also got his sentence cut down from six years to two, so he’s already familiar with just how money does a criminal good. But why now? Milken, it seems, is besties with Treasury Secretary Steven Mnuchin. Mnuchin apparently put the word in for his pal, after the convicted trader let Mnuchin use his private plane for reasons still not made public.

But wait! There’s still at least a bonus pardon ahead, because it seems that Trump is also readying a pass for David Safavian. Compared to Blago, Bernie, and Mikey, Safavian may seem like a strange choice. But the Republican lawyer was a lobbyist for none other than Jack Abramoff — who remains one of the gold standards for political corruption. And corruption is exactly why Safavian got a year in prison after being convicted on four counts of obstruction and perjury. To show what an outstanding and deserving guy Safavian really is, he appealed his first conviction, got a second trial, and in the process added a new conviction on perjury.

Donald Trump — out there bringing justice for the people who count.

As it turns out, even this list of scum wasn’t scum-sufficient to capture all of Trump’s pardon list. I completely omitted the corrupt CEO of a “mental health care” company that defrauded Medicare to the tune of $205 million. She also gets a pardon, because using Alzheimer’s patients to rip off the government is cool!