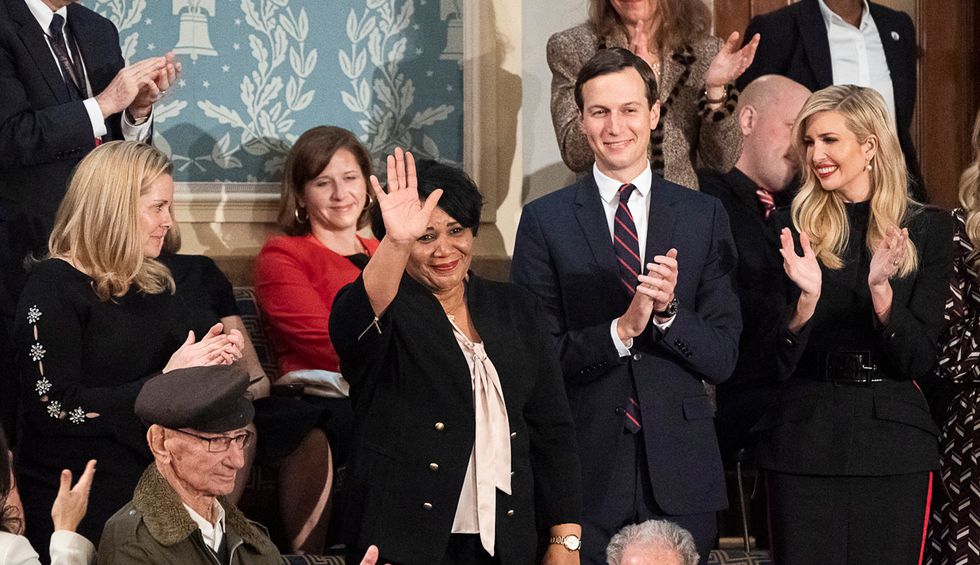 English: A tearful Alice Johnson, who was serving a mandatory life sentence without parole in a nonviolent drug case and was granted clemency by President Donald J. Trump in June of 2018, gestures toward President Trump from the special guests gallery Tuesday, Feb. 5, 2018, during the State of the Union Address at the U.S. Capitol in Washington, D.C. Johnson is accompanied (to her left) by Jared Kushner, advisor to the President, and his wife, Ivanka Trump, the President's eldest daughter. (Official White House Photo by Andrea Hanks)
Alex Henderson
February 03, 2020

Alice Marie Johnson has become a symbol of everything that’s terrible about the War on Drugs and mass incarceration in the United States: before President Donald Trump granted her a pardon, she was serving a life sentence in federal prison for a nonviolent drug offense. In a commercial broadcast during the Super Bowl on Sunday, Trump bragged about his role in Johnson’s release. But articles published in Law & Crime and the Daily Beast point out that Trump still has a long way to go when it comes to criminal justice form in the U.S.

Trump’s ad asserted, “Politicians talk about criminal justice reform; President Trump got it done. Thousands of families are being reunited.”

Johnson’s case was brought to Trump’s attention by Kim Kardashian, who is married to hip-hop star and outspoken Trump supporter Kanye West. Kardashian lobbied for Johnson’s release, and because she was in the federal prison system rather than a state prison, Trump had the power to grant her a pardon.

I promised to restore hope in America. That includes the least among us. Together, let’s KEEP AMERICA GREAT! Text… https://t.co/qgskhRQKI7
— Donald J. Trump (@Donald J. Trump)1580687775.0

Legal writer Alberto Luperon, in an article for Law & Crime, notes that in the ad, Trump “brought up a case that had nothing to do with ‘criminal justice form’ in any meaningful sense of the word…. To date, Johnson is one of 24 people to get clemency during the Trump Administration. Was it ‘criminal justice reform?’ No, it was a use of the regular ol’ pardon power. She is out of prison because her sentence was commuted, not as a result of changes to the criminal justice system.”

Luperon points out that law professor Joyce White Vance (a former federal prosecutor) has stressed that Johnson’s case is merely the tip of the iceberg. On Sunday, Vance tweeted, “Alice Johnson is one person who won early release because celebrities brought her to Trump’s attention. She deserved it. But there are thousands more like her in prison. We need a real pardon process that works fairly. We need real criminal justice reform. Don’t be fooled.”

Nonetheless, Luperon does give Trump some credit, asserting that he “absolutely does have a comprehensive institutional victory under his belt when it comes to criminal justice reform.… It’s called the First Step Act. Trump signed it into law in December 2018, months after Johnson’s sentence was commuted. It was a rare bipartisan victory for an administration characterized by controversy. Among other things, the law increased the amount of good time credit for many kinds of federal inmates, prohibited the use of restraints on pregnant women, and eased criminal punishments on certain kinds of drug offenders.”

Alice Johnson is one person who won early release because celebrities brought her to Trump's attention. She deserve… https://t.co/lKdnZzqnvl
— Joyce Alene (@Joyce Alene)1580688242.0

Journalist Emma Tucker, in a Daily Beast article, notes that Trump’s ad has received some negative reactions on Twitter. For example, Rep. Bakari Sellers of South Carolina tweeted, “That ad was offensive AF….. The ‘I freed a Negro’ ad.” And journalist Judd Legum tweeted that pardoning Johnson was only one act — not full-fledged criminal justice reform. Legum posted, “Interesting that this ad makes it seem like Johnson was released because of criminal justice reform but it had nothing to do with that. Trump granted her clemency after being lobbied by Kim Kardashian.”

@Bakari_Sellers I completely agree with you, but I'm afraid it's convincing to the uninformed masses out there. Not… https://t.co/hRcJAeROKi
— Juana B. Real (@Juana B. Real)1580693387.0

Interesting that this ad makes it seem like Johnson was released because of criminal justice reform but it had noth… https://t.co/U2MvNHX0S7
— Judd Legum (@Judd Legum)1580689237.0