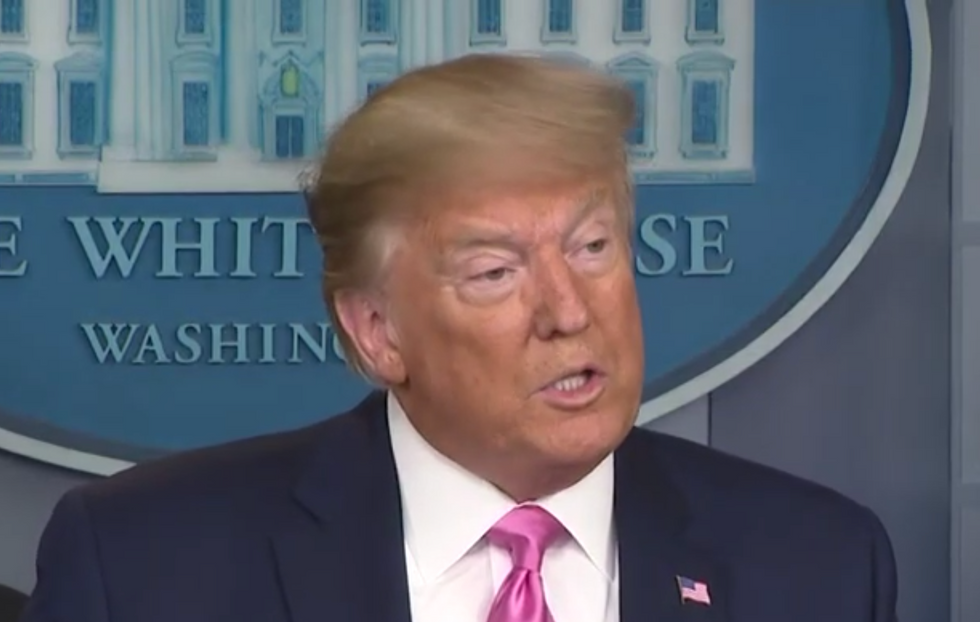 In a rambling, vague, and, at times, gratuitously boastful press conference, President Donald Trump demonstrated his sprawling ignorance about public health Wednesday night as he gave his first speech in response to the coronavirus outbreak.

Though he boasted about working with some of the greatest experts in public health in the world, he demonstrated no personal knowledge of the science or the nature of the outbreak. He seemed entirely ambivalent about getting funding from Congress to fight the pandemic, noting that his administration asked for $2.5 billion, but some Republicans have said $4 billion would be more appropriate, and some Democrats have asked for twice that.

Trump said he wouldn't mind getting more money from Congress, if they want to give it, but also that the original $2.5 billion would be sufficient. He seemed to have no idea — and less interest — in what the money could actually be used for and what scale of the problem could require.

Most strikingly, Trump revealed that he previously had no idea about the how deadly the season flu can be.

It's disturbing that a president would have previously had no idea how serious a public health threat the flu is, especially after having been in office for three years. But it was also notable that Trump felt the need to bring up the mortality of the flu in a clear effort to diminish the seriousness of the current outbreak.

Trump added that the United States will "soon" have a vaccine for the coronavirus — even though his own Health and Human Services Secretary Alex Azar said it wouldn't be possible to develop one in less than a year.

Trump also made a prediction that none of the public health officials working in the administration has been willing to make, saying that he thinks the number of infection cases in the United States will shortly be "going to be down to zero." That could easily be proven false in the coming days if the outbreak spreads, furth undermining confidence in his leadership.

The president also criticized Democrats who have found fault in his administration's handling of the outbreak, saying that they should all be working together to respond to the pandemic. But when asked about the week's plunging stock market, he absurdly downplayed the role the coronavirus has had in spiking investor panic, instead saying that the Democratic presidential primary debates caused the decline.

"I think they look at the people you watch debating last night, and they say, 'If there's even a possibility that that could happen,' I think it takes a hit because of that," he said, before acknowledging that the virus also contributed to the drop.

Apparently responding to calls from outside the government to appoint a coronavirus "czar," Trump said that Vice President Mike Pence would organize the administration's response. But many observers noted that this choice was far from reassuring. Pence has no expertise in public health, and he was sluggish to respond to a sudden HIV outbreak in Indiana while he was governor, initially opposing harm-reduction policies on moral grounds that eventually proved to be extremely effective. He also, like the president, denies the science behind climate change. And as late as 2000, Pence was still casting doubt on the finding that smoking causes cancer.

And despite the clear danger posed by the threat, Trump expressed not regret for repeatedly pushing for cuts in the administration's public health agencies.

"I’m a business person, I don’t like having thousands of people around when you don’t need them," Trump said. "We can get ‘em back really quickly."

Of course, this isn't true. Many people cut from government will never return to the work. And administrations need strong institutional structures and forward-looking preparation before a crisis hits — exactly the kind of work that Trump's proposed cuts could make so much harder.