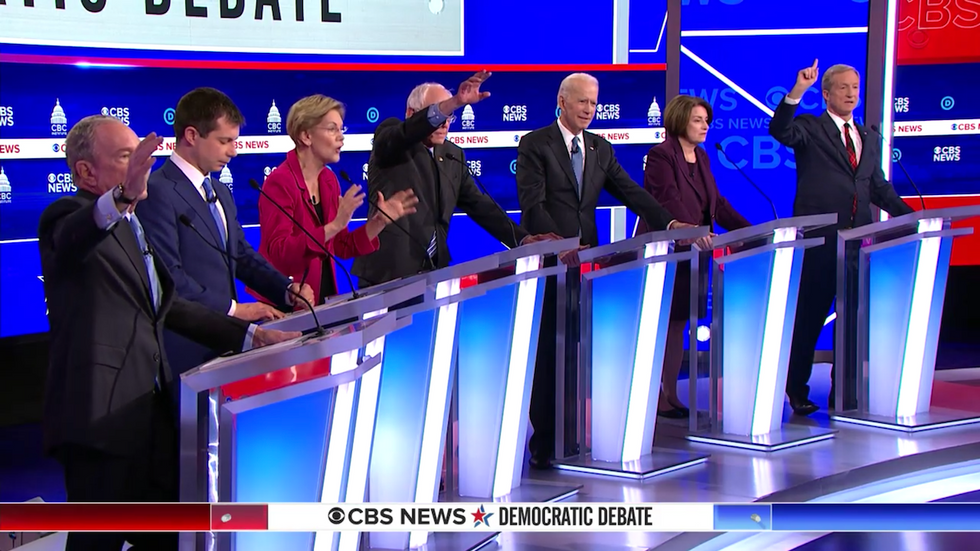 Well, that's was a complete disaster.

Tuesday night's Democratic presidential primary debate was the last time the candidates would meet on stage together before the potentially pivotal South Carolina primary, and largely because of absolutely dreadful moderation, the whole event was essentially pointless.

I often write up my analysis of debate nights by explaining my subjective perspective about who came out stronger after the debate and who left weaker — winners and losers. But by the midpoint of the debate on Tuesday night, that format looked less and less appropriate. The muddled, confused, and slapdash nature of the event made the candidates all look like they were struggling to get a word in edgewise. They talked over each other. The questions would insubstantial and amateurish (ironically, one of the best questions came from Twitter.) There was no cohesion to the discussion and no internal logic behind which candidate got to speak. And while there were jabs and counterattacks between some of the candidates, the moderators were usually unable to pull the discussions in a meaningful direction.

Sen. Elizabeth Warren (D-MA) had some success in getting speaking time through force of will, but the result was such an uneven mishmash of topics and attacks that it's hard to imagine that she came out ahead.

On a list of losers, the moderators, led by CBS News' Gayle King and Norah O'Donnell, surely come out first. They were the subject of endless scrutiny on social media, including for others in media who know the struggles of the presidential debate format.

"Debates are hard. TV news rivalries are hardcore," said CNN's media reporter Brian Stelter. "That said, debate pros at other TV networks are exchanging messages calling this a 'disaster,' a 'nightmare' and worse."

Errol Louis, a local TV news host in New York City, pointed out that the moderators completely failed to manage the candidates when they talked over each other:

When the candidates start talking over each other, the moderators should: 1) Bring the whole thing to a dead halt… https://t.co/9ntrGemKKT
— Errol Louis (@Errol Louis)1582682696.0

The amount of crosstalk resulted in a lot of completely useless airtime. Sometimes it wasn't even clear who was speaking or who was supposed to be speaking.

And then there was the completely vacuous questioning. King, for instance, let former New York Mayor Michael Bloomberg claim falsely that he stopped the city's abusive policy of stop-and-frisk — in fact, a judge stopped it and Bloomberg fought the ruling, but you'd never know from King's response. Later, after this lie, she asked Bloomberg a purely factual question — whether life expectancy improved in the city during his terms — instead of presenting the facts about his record and asking him to defend them. And the moderators seemed completely caught off guard when Warren brought up one of the most dramatic accusations of mistreatment of women that Bloomberg had faced, that he allegedly told a female employee to "kill" the fetus when she got pregnant. By being unaware of this information, the moderators made it seem like Warren was leveling an extreme charge against the former mayor, rather than accurately reporting news reports that Bloomberg disputes.

At the end of the debate, the moderators wasted a bunch of time asking candidates to list a misconception about them and their personal mottos. These kinds of gimmicks always leave primary candidates in a tough bind: Do they stick to the rules and answer the question as straightforwardly as possible? Or do they use the speaking time to launch into their stump speeches? The candidates took different approaches with varying levels of success, but overall the segment was just a huge missed opportunity to discuss substantial issues that impact the country.

Because it was so poorly moderated, the viewers — myself included — must be listed on the "losers" side of the ledger as well. No one looking for substantial debate about policy issues, the upcoming election, or even for the kinds of passionate exchanges about candidates' histories that we saw at the previous debate was likely to come away satisfied or enlightened.

And then there was the audience in the debate theater itself, which booed and cheered at the oddest times. The audience, or at least some vocal portion of it, seemed passionately in favor of Bloomberg, despite his lackluster performance.

Of course, no candidate running from behind comes away from such a dismal debate as a winner. These high-profile stages offer a rare opportunity to make a splash in a campaign that is usually drowned out by the daily outrages of the Trump White House. But failing to give candidates a decent platform to make their marks is no advantage.

Even Sanders, the frontrunner of the primary, can't really be said to come out ahead. Going into South Carolina, he certainly has the wind at his back from his successes in the first three competitions. But he faces his biggest challenge yet in the primary on Saturday, because former Vice President Joe Biden has long been positioned for a strong showing in South Carolina. Recent polls show Biden still with a narrow lead. If Sanders could snatch victory from his chief rival in the state, it would go along way to bolstering his campaign and raising the chances that he could wrap up the nomination sooner rather than later. But if Biden gets a win in South Carolina, it could put a real drag on Sanders' campaign. And there's no reason to believe that Tuesday's debate gave Sanders any additional edge that he is looking for.