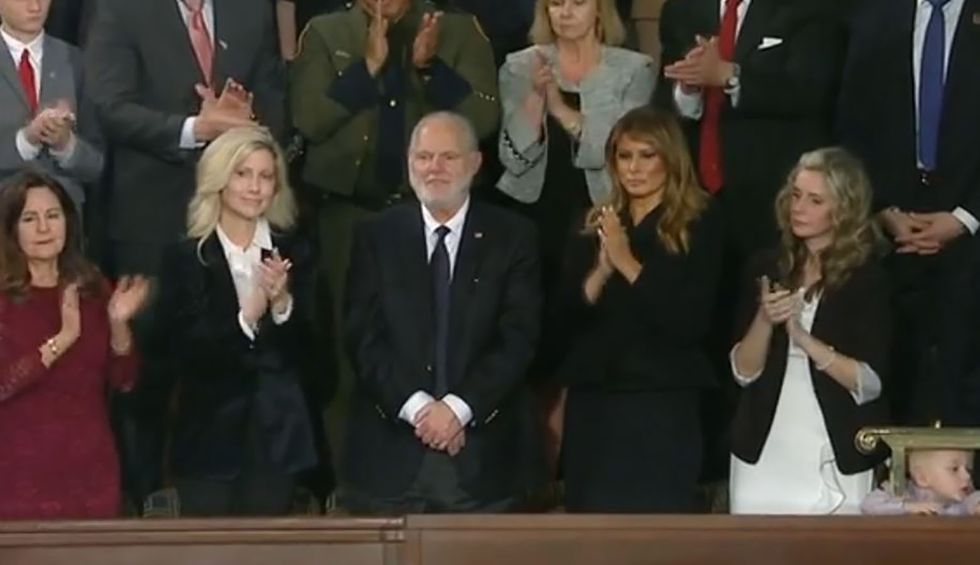 It doesn’t take looking for something obscure to reveal Rush Limbaugh as an asinine blowhard who discovered that it’s possible to build a career on endless hate. Limbaugh’s most famous quotes are sufficient to show exactly who he is. Dipping even a toe into that tub of ugliness he has filled over decades on right-wing radio makes it clear that even breaking Limbaugh’s decades of verbal sewage down into categories is difficult. Should they be divided by year? He certainly does not become less objectionable over time. If anything, the praise Limbaugh has received for daring to be an asshole has sent him on an unending quest for the most offensive statements he can create. By topic? There is no topic where he’s been less than hideous.

Cancer is a scourge. It should not happen to anyone. But having cancer does not remove one speck of damage that Limbaugh has done to the nation. And it’s a lot. That last night Trump handed over to Limbaugh the Presidential Medal of Freedom, an honor usually reserved for America’s best … shows that he is America’s worst.

“Feminism,” said Limbaugh in his most-quoted line, “was established so as to allow unattractive women access to the mainstream of society.” It was on his radio show that the slur “feminazi” was coined, as Limbaugh bellowed daily against the crime of women seeking to claim value not given to them by men. “Militant feminism” was another of those terms that slipped into a million conversations, deployed against any woman who dared to speak in public. Among the many sins Limbaugh laid at this altar, he declared that abortion was how militant feminists “impose their will on the rest of society, particularly on men.” The idea of consent has been a favorite target of Limbaugh’s attacks, or more properly, in his defense of rape. “If the left ever senses and smells that there's no consent in part of the equation then here come the rape police,” said Limbaugh. “But consent is the magic key to the left.”

If the idea that women might deny men sex is worth Limbaugh pounding his studio table, so is the idea that women have any role to play in the world besides generating babies. It’s not just his unending lies about abortion; birth control of any kind is offensive to Limbaugh. He famously referred to college student Sandra Fluke as a "slut" and a "prostitute" for arguing that contraceptives should be more widely available. But even that might pale beside the amount of time Limbaugh has spent warring against condoms—as a means of both preventing pregnancy and guarding against disease. In the process, he’s repeatedly made claims concerning failure rates and “holes” that have sowed confusion and generated a genuine threat to health that has almost certainly left behind a body count. Oh, and along the line Limbaugh claimed that the average penis was now somehow smaller because of feminazis.

When people weren’t Limbaugh’s target, he had a whole planet to pick on. He told his listeners that both Styrofoam and plastic were biodegradable, but that paper is not. When he was not declaring the climate crisis a hoax—or a conspiracy—and attacking scientists, Limbaugh was constantly making up his own statistics, such as pushing the now widely cited idea that there is “more forest in North America now than when Columbus landed.” There’s not.

And, of course, there was racism. There was constant racism. Limbaugh told a black listener who phoned in to take “that bone out of your nose and call me back.” If that racist statement is too subtle, Limbaugh also had some comments about the NAACP to make things super clear. “The NAACP should have riot rehearsal,” said Limbaugh. “They should get a liquor store and practice robberies.” Turning to President Obama, Limbaugh laughed about the nickname “Curious George," taken from the monkey in children’s books. As African American unemployment was going down under President Obama, Limbaugh constantly insisted that it was going up, that black Americans were “depressed” because Obama was a “hoax,” and also that black women in America were very upset over Tiger Woods’ “choice of females.” Woods was far from the only black athlete who frequently wound up in Limbaugh’s crosshairs. He used his brief stint as an NFL commentator to sneer at quarterback Donovan McNabb as someone who had no real talent and who was only leading a team because "the media has been very desirous that a black quarterback do well."

Of course, Republicans don’t just love Limbaugh for his racism, sexism, anti-environmentalism, and just plain ignorance. They’re also there for his insightful political points—such as calling Amy Carter "the most unattractive presidential daughter in the history of the country," Chelsea Clinton—12-year-old Chelsea Clinton—the “White House dog.” In these days where it’s a criminal offense to mention the name of Donald Trump’s children, Republicans are still chuckling at these chestnuts.

Naturally, Limbaugh was also a big fan of that other Republican favorite: torture. He dismissed war crimes at Abu Ghraib, saying, “It's sort of like hazing, a fraternity prank. Sort of like that kind of fun.” When that statement generated some pushback, Limbaugh was having nothing of it. He had this cogent defense of those involved: “I'm talking about people having a good time. These people, you ever heard of emotional release? You ever heard of need to blow some steam off?” Apparently beating, shocking, and setting dogs on helpless people is a great emotional release. On the other hand, Limbaugh was really against the facility at Guantanamo Bay … for its shortage of torture. “We need to call it, 'Gitmo, the Muslim resort,'” said Limbaugh. “Any resort that treated people like this would have ads all over the New York Times trying to get people to come down and visit for some R&R, for some rest and relaxation.”

But for America’s right … he’s right. Limbaugh is the man who showed them you could make a living from nastiness, build a movement on pure hate. No wonder Trump loves him.