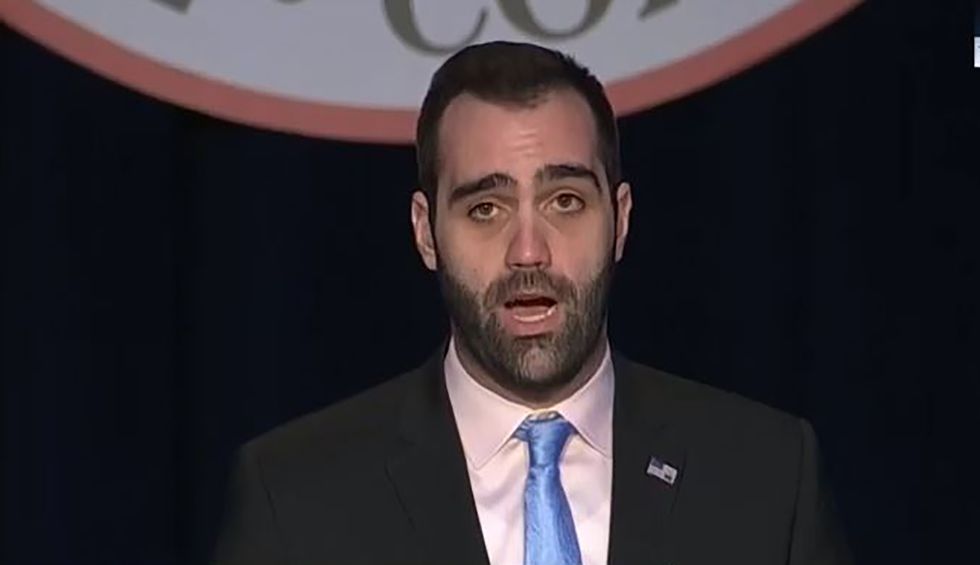 Richard Walters began his career at the lowest rungs of the Republican National Committee when he was 23. Now, at 30, he’s the RNC chief of staff, earning far more than any other official there, including his boss, the chairwoman, and the top officials at the Democratic National Committee.

The rich compensation might have raised eyebrows — but for the fact that the RNC obscured it. Last year, Walters earned a salary of $207,558, but the party paid him an additional $135,000 through a shell company he established in December 2018 called Red Wave Strategies.

Federal Election Commission reports described the RNC’s payments to Red Wave as “political strategy services,” as if the money had flowed to an independent contractor and not Walters himself. Red Wave does not have other employees and has no clients other than the RNC.

President Donald Trump and the Republican Party are raising unprecedented sums of cash for the 2020 election. The party brought in more than $241 million alone in 2019, far exceeding the $107 million the RNC raised in 2003, the last time there was a Republican president seeking reelection, and eclipsing the $92 million raised last year by the Democratic National Committee. The RNC spent record-breaking sums, too: In 2019, the party doled out $192 million.

Amid the flows of cash, a select group of political operatives has leveraged Trump campaign ties for lucrative consulting work. In October, The Washington Post highlighted the political consulting prowess of Katie Walsh, for whom Walters once worked at the RNC, and her husband, Mike Shields. Both Walsh and Shields previously served as RNC chiefs of staff. Three businesses controlled by Walsh and Shields have been paid more than $12 million from the RNC, multiple Republican groups and political committees since 2017, according to the Post’s analysis of campaign filings and other records.

Michael Steele, a former RNC chairman, said Walters’ payment structure “just smells” and was in keeping with a culture of “sweetheart deals” among party insiders that he described as corrosive.

A half-dozen former RNC employees and Republican operatives, who spoke to ProPublica on the condition of anonymity to avoid retribution, said that the various deals, typically veiled behind opaque limited liability corporations, create an unseemly overall impression that is bad for morale and could eventually harm the party’s credibility with donors.

“These guys, they just don’t know what impact this has on rank-and-file folks out there,” Steele said. “It’s disrespecting people who donate to the party.”

Mike Reed, an RNC spokesperson, told ProPublica over email that Walsh and Shields “bring incredible value to the RNC and the party as a whole.”

Reed also provided comments concerning Walters from chairwoman Ronna McDaniel and the RNC’s budget committee chair, Glenn McCall. McDaniel said that Walters’ “record as chief of staff speaks for itself,” and McCall said Walters’ “compensation package was approved by myself, the chairwoman, treasurer, and budget committee” because of his “outstanding work.” Given Walters’ success on the job, and the size of the RNC’s operation, which consists of thousands of employees and volunteers, McCall said Walters is “probably underpaid for his position.”

Reed did not address why the RNC pays Walters through Red Wave.

ProPublica described the payments to Walters’ LLC to Larry Noble, a former FEC general counsel, a nonpartisan position. Noble said that if the Red Wave income was really part of Walters’ compensation, it should’ve been attributed to his name and disclosed as “payroll,” a designation that covers the salaries of RNC staffers. The arrangement, he said, amounts to “a serious reporting violation. It seems pretty blatant. Hiding the recipient undermines the purpose of disclosure. The question is, why are they enriching him in this particular way?”

The RNC has also covered costs or made payments that are personally beneficial to the president, including nearly $2 million for the use of Trump properties, as well as more than $100,000 dollars in purchases of Donald Trump Jr.’s 2019 book, “Triggered: How the Left Thrives on Hate and Wants to Silence Us.”

Reed said the party’s payments were appropriate. He told ProPublica that Trump properties can be “cheaper to rent than other venues,” and that the FEC “demands the RNC receive market rates.” He added that Trump Jr.’s books were used for fundraising, and that the amount raised off copies exceeded the costs.

The RNC has also spent some $25,000 on customized Sharpies for the president — markers retrofitted in glossy black and embossed with Trump’s golden signature. These “political expenses,” Reed said, are not unusual for presidents. “The taxpayers,” he said, “shouldn’t have to cover these costs.” Sharpies are the president’s preferred writing tool, and he uses them to sign documents and, in one notable recent instance, annotate maps.

As chief of staff, Walters is responsible for the party’s overall budget, approving the budgets of its various departments, handling personnel issues and dealing with donors who want access to McDaniel. Additionally, McDaniel said, Walters oversees “massive new investments” in the organization’s data, political and digital teams. Last year, McDaniel was paid $100,000 less than the total amount Walters took in from the RNC.

Crucially, the chief of staff also executes all RNC vendor contracts, making Walters a key figure in the small network of operatives and friends who have struck lucrative contracts with the party.

Reed said there is a backstop beyond Walters when it comes to contracts. The RNC’s budget is approved by two committees and voted on by the organization’s 168 members, he said.

In 2018, Holtzman Vogel Josefiak Torchinsky, an election and campaign law firm in Virginia, formed four LLCs tied either to Walsh, Shields, a Shields business partner or, in the case of Red Wave, Walters. Collectively, the RNC has paid them $865,000.

Walsh, along with other Republican consultants, maintains an office on the RNC’s fourth floor, just feet from Walters and McDaniel. Since early 2017, when she left the White House, the organization has paid her more than $745,000 through a consulting company. That contract predates Walters’ tenure as chief of staff, though the RNC declined to say whether Walters has reapproved it.

For her part, Walsh said in a statement to ProPublica, “Since my contract with the RNC is well within or below market rate, the only conclusion I can reach from the insinuations being made in this ‘article’, is that there are some people in the fake news/left wing media who don’t believe a young, accomplished woman should have a seat at the table.”

Another RNC arrangement involves a close Walters friend. Not long after he became chief of staff, a photographer named Blake Belcher, a college classmate of Walters, set up an LLC of his own, according to corporate records in Mississippi, where the company, Concept Marketing & Branding LLC, is registered.

Belcher has been receiving modest payments for his “photography services” from the RNC on and off since 2015, two years before Walters became chief of staff. Typically, the transactions amount to several thousand dollars and are attributed to his name in FEC reports.

Starting in December 2017, the month Belcher established his company, and several months after Walters became chief of staff, the RNC also began to pay Concept for “printing & design services” and “printing/graphic services.” Some of the expenditures to the LLC were significantly higher than those connected to Belcher’s name, including one for roughly $78,000, and another for more than $89,000.

Asked about the arrangement, Belcher deferred to the RNC. The payments, the RNC spokesman Reed said, covered production costs for a host of items, including invitations, business cards and Christmas cards.

“This company has been chosen multiple times after a bid process,” he said. “And they have always come in the cheapest.”

Last summer, Belcher was hired to take photographs at an RNC event that featured Walters. After it was over, Belcher posted 88 photos of Walters on his website. In one series, the chief of staff, dressed in a pink plaid sport coat, his dark beard neatly trimmed, stands behind a lectern that bears the names of Trump and his vice president, Mike Pence. In a different sequence, he’s seated on a panel, holding a microphone. All of the photos are for sale, starting in wallet size, for $2.50.

Reed told ProPublica that Belcher has been “hired to take pictures at countless RNC events,” including “many” where Walters was not an attendee.