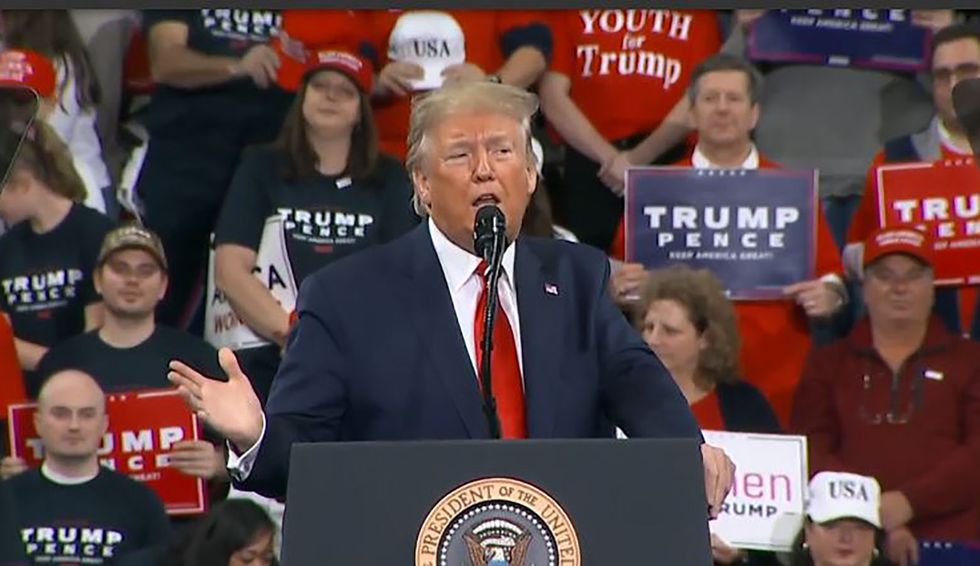 President Donald Trump had a lot to say about health care when he gave his State of the Union speech on Tuesday, February 4, claiming that he was determined to protect coverage for preexisting health conditions and that “socialist” Democrats were trying to rob Americans of the health plans they love. Problem: the Trump Administration is very much on board with a Republican lawsuit that seeks to abolish the protections of the Affordable Care Act of 2010, a.k.a. Obamacare — including coverage of preexisting conditions — and rip health insurance away from millions of Americans by arguing that the law is unconstitutional. And journalist Daniel McGraw points out in a February 10 article for The Bulwark that health care could be a major liability for Trump in the Rust Belt states that he needs to win in order to be reelected in November.

The Bulwark is not liberal or progressive. Founded by Never Trump conservatives Bill Kristol and Charlie Sykes in late 2018, The Bulwark has a right-wing point of view but is passionately anti-Trump. On the surface, it might seem strange that a conservative site would be sympathetic to Obamacare. But in fact, the elements of the ACA were greatly influenced by the “universal health care via the private sector” approach championed by President Richard Nixon, the Heritage Foundation and Mitt Romney (now a U.S. senator) in the past. Nixon never would have favored the type of Medicare-for-all proposal that Sen. Bernie Sanders is pushing for, but the health care overhaul he proposed in the early 1970s and worked on with the late Sen. Ted Kennedy was comparable to the ACA yet more aggressive.

Demonstrating why health care could be problematic for Trump in the 2020 election, McGraw cites the results of Baldwin Wallace University’s Great Lakes Poll (which was published on January 21). Only four states were included in the poll, all of them Rust Belt States that went from voting for President Barack Obama in 2008 and 2012 to favoring Trump over Democratic presidential nominee Hillary Clinton in 2016: Pennsylvania, Ohio, Michigan and Wisconsin.

McGraw explains, “One question in the poll was especially relevant to health care, and unlike the questions in most previous national polls, phrased very directly: ‘Do you approve or disapprove of the way Donald Trump is handling health care policy?’ The results show Trump and the Republicans have a big problem in these key states.”

“Exit polls in 2016 showed Trump lost to Hillary Clinton among women in each of those states: by 42-55 in Pennsylvania, 42-53 in Michigan and 43-53 in Wisconsin,” McGraw points out. “He can’t afford to lose even more ground.”

Robert Alexander, an Ohio State University political science professor and one of the people who oversaw the Great Lakes Poll, told The Bulwark that health care is a high priority among older votes in Rust Belt states.

“The aging population in these states is big in terms of numbers, and (health care) is a big issue for them,” Alexander explained. “These people in these states aren’t looking 20 years down the road on how they get health care; it is much more immediate for them. This is a very real issue, and instability doesn’t sell well. Trump’s policy seems to be based on more chaos, and while that might be appealing to some voters on other issues, it doesn’t seem to be that way for the people we polled.”

According to Lauren Copeland (a political science professor at Baldwin Wallace University in Ohio and another person who worked on the Great Lakes Poll), public support for Obamacare has continued to grow.

“People are really skeptical of new policy changes that are imposed upon them,” Copeland told The Bulwark. “What seems to have happened is that the voters (still) saw Obamacare as a new policy in 2016, and were a little leery of it. But now, it is the standard in many ways — and most people don’t want to lose it now.”

If independent voters in the Rust Belt believe that Trump is hostile to their health care needs, McGraw explained, they might swing Democrat.

“Much will depend on who the Democratic candidate turns out to be, but whoever it is, Trump will need to get the independents on his side by at least the same margins as he did in 2016,” McGraw writes. “If health care is, as these independents say, their most important issue — and if they disapprove by large margins of Trump’s handling of health care —  his challenge is formidable.