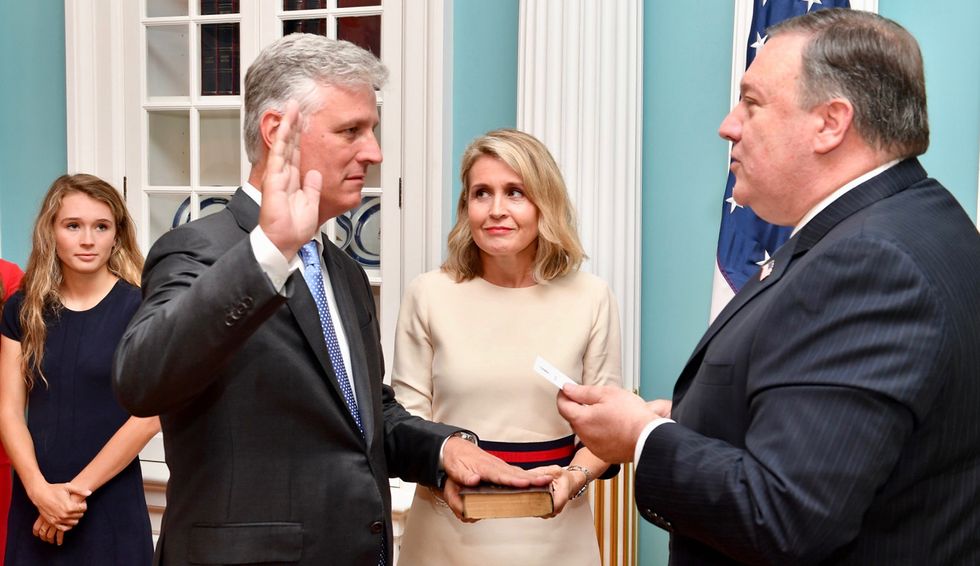 Trump National Security Adviser Robert O'Brien took to multiple Sunday shows Today to, evidently, lie outright to the American people on Donald Trump's behalf. Parroting a Donald Trump line that does not mesh with any of the previously-known revealed intelligence about Russia's repeated efforts to disrupt United States elections via state-sponsored hacking and online propaganda efforts, O'Brien is insisting that he "has not seen" any intelligence to indicate that Russia is again attempting to boost Donald Trump's campaign.

In a Saturday-taped interview for Face the Nation, O'Brien made claims that could have come directly from Trump's own mouth.

The entire segment is remarkable. Again and again, host Margaret Brennan pushed O'Brien on his claims—at odds with all publicly revealed intelligence of the past four years—even asking him bluntly "Are you denying that it is happening?" O'Brien, however, maintained the Trump-favored line. If anything, he said, he has "heard" that Russia wants "Bernie Sanders to win."

MARGARET BRENNAN: But the White House was briefed on February 14th. Were you not in that briefing when the president was informed?

O'BRIEN: Well, there's no briefing that I've received, that the president has received, that says that President Putin is doing anything to try and influence the elections in favor of President Trump. We just haven't seen that intelligence. If it's out there, I haven't seen it. I'd be surprised if I haven't seen it. The leaders of our- the IC have not seen it. So I- again, I don't know where this is coming from. I've heard these rumors and these leaks from Adam Schiff's committee, but I- I have not seen them myself and I've seen no intelligence along those lines.

MARGARET BRENNAN: But just to clarify, are you saying that Joseph Maguire, the former acting director of national intelligence, did not inform you about the U.S. Intelligence Committee's- community's findings?

O'BRIEN: No. I, look, I think- you know, and again, I- I don't want to get into private conversations in a- in a presidential daily brief, but I- I don't think Admiral Maguire was necessarily informed of what was going to happen at that hearing in the House either. And- and again, there's nothing that he's given up, no information Admiral Maguire gave us, Gina Haspel has given us- Director Haspel, Ambassador Grenell the new acting DNI, that comports with what was leaked out of that House Intel Committee. So I haven't seen it. The leaders of the intelligence community that I've spoken with haven't seen anything that comports with what was leaked out. But again, those leaks, I don't know if that's what the briefers told the House committee. I mean those were simply --

MARGARET BRENNAN: But- well, that- that's contradicted by reports that the director of national intelligence, Maguire, did brief White House officials. But more broadly, the FBI director at the beginning of the month, Chris Wray, testified that Russia continues to try to influence the elections mainly through social media manipulation. So this pattern of behavior has continued, Russia is undeterred. Are you denying that that is happening?

O'BRIEN: No, no. What I- look I- what I've heard from the FBI, you know- well, what I've heard is that Russia would like Bernie Sanders to- to win the Democrat nomination. They'd probably like him to be president, understandably, because he wants to- to spend money on social programs and probably would have to take it out of the military, so that would make sense.

If you're looking for the two-bit summary of O'Brien's abject parroting of the Trump team's political talking points, though, O'Brien delivered:

"Why would they have a preference for President Trump, who is rebuilding our military, who is giving the Ukrainians lethal aid to fight Russian troops? So that doesn't make sense."

O'Brien also appeared on ABC's This Week, where he left host Goerge Stephanopoulos similarly astonished that the supposed national security adviser would be repeating, to the public, what all evidence suggests is willful political disinformation. Again he claimed Russia "wants Bernie Sanders to get elected, but that's no surprise. He honeymooned in Moscow," while insisting he has yet to see "any intel" that Russia is working to assist Trump.

"You're flatly denying that the intel community has analysis that Russia is favoring Trump?" asked Stephanopoulos.

"What I'm saying is I haven't seen that analysis," claimed O'Brien.

Even within the Trump administration, this is a remarkable moment. This is not a campaign hack or even a now-perpetually-assumed-to-be-dishonest White House press secretary piping up to lie, outright, about national intelligence—something that would itself be a scandal, if the Republican Party had not devolved into fascist technique. This is an ostensible "national security" adviser spouting off with such claims, even as members of the free press ask incredulously whether he is truly claiming what he appears to be claiming.

We are at a new, even darker moment. There's no way around that. Our government is lying to us, on purpose, in order to push forward a false narrative more pleasing to a Dear Leader figure now purging government of anyone not willing to announce false information on his behalf.

Lying to the public about national security for Dear Leader's sake is the bottom. There is no lower than this that still includes having (non-rigged) elections. The Republican Party is now supporting overt government disinformation in order to bend the campaign their way; the press, at least, seems content to express only mild on-camera astonishment that it is happening.

The man ought to be swiftly removed. Republican senators still giving even the slightest damn about their nation, rather than their party, ought to be leading that very charge. Instead, Sen. Mitch McConnell continues to block efforts to protect the next election while the rest of his caucus remains silent—or assists him.