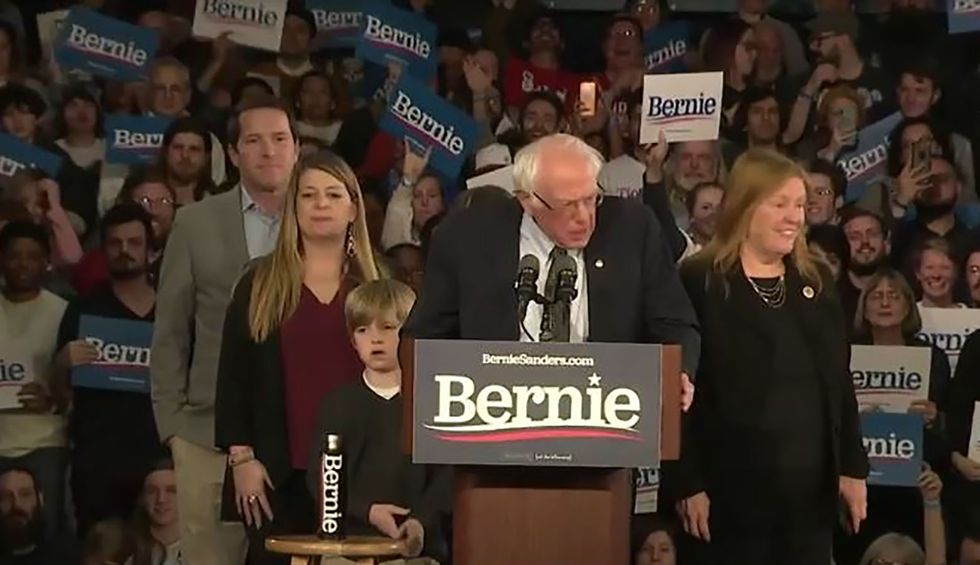 We caution readers to be very careful in interpreting the Democratic primary election results so far for reasons cited below. We think the way our major news organizations are reporting the primary results can easily create a misleading impression of voter sentiment.

The analysis below should give you pause whether you think Sanders is, and should be, a shoo-in to beat Trump or you fear that a Sanders nomination will ensure a second Trump term and a romp by Republican Congressional candidates.

We ask ardent supporters and foes of Sanders, or any other candidate, to avoid a hot or presumptive reaction to what follows, a concern based on many responses to some of my caucus night tweets and Facebook posts in recent weeks.

Please ponder what follows in terms of the real issues in the 2020 general election.

First, whether our Electoral College gives Trump a second term even as he will certainly lose the popular vote—and by a huge margin. Second, how voter turnout will affect whether Republicans retain control of the Senate, which will enable Mitch McConnell to continue packing the federal courts with minimally qualified corporatist and right-wing ideologues.

Now let’s look at the Nevada primary that ended on Saturday.

News reports focus on Bernie Sanders as the winner—alongside his win in New Hampshire and his tie with Pete Buttigieg in Iowa.

Measured in percentages, Sanders won by a huge plurality with more than 36% of the final caucus votes counted by late Sunday. That’s impressive, especially since in initial caucus voting he got 33% and second-place finisher Joe Biden’s final results came in at less than 20%.

But now consider the numbers of votes cast.

Nevada has almost 611,000 registered Democrats. Final results will show fewer than 36,000 votes for Sanders. That means for every vote Sanders won there were 16 Democrats who choose someone else—or no one at all.

The low turnout is surprising since the party made voting easy. Ballots could be cast in person for four days or at the Saturday caucuses. Yet 91% out of Nevada Democrats didn’t vote or caucus.

Let’s call the roughly 555,000 Nevada Democrats who didn’t participate the “Don’t-Care Democrats.” What does it say about the Culinary Workers Union and its much-discussed political power in Nevada that so few Democrats voted? What does it say about the union, slightly more than half of whose members are Latino, endorsed no candidate and by some accounts was openly hostile to Sanders?

The numbers of votes cast, rather than percentages, were downplayed in many news reports, especially on television and radio. Actual votes cast were pushed down in reports like those in The New York Times. Even worse was the main Washington Post Sunday story, which never mentioned how many ballots were cast or the overall percentages, but declared in its headline that “Sanders decisively wins.”

Now compare the Nevada results with New Hampshire, where Sanders also won. New Hampshire has less than half the population of Nevada—1.3 million people to 3.1 million.

Democratic primary votes for all candidates totaled 296,622 or 107% of the number of New Hampshire Democrats.

Don’t be alarmed—no gravestones voted. In New Hampshire, people who register without choosing a party affiliation can vote in primaries as either Democrats or Republicans. New Hampshire’s largest registration is undeclared with 415,900 out of 981,000 total registered voters.

Sanders got 11% of the potential primary vote in New Hampshire. And that state’s “Don’t-Care Democrats,” even assuming every undeclared voter is a Democrat, were 58% of potential voters compared to 95% in Nevada.

The results from these two of our 50 states show that the overwhelming majority of Democrats in a demographically diverse and fast-growing western state seem to have no interest in who lives in the White House. They show that in New Hampshire, with its century-old town meeting traditions, draws many more voters but still a majority can’t be bothered to cast ballots.

And they show that it is possible to win a part primary with a tiny number of registered primary eligible voters, less than one in 17 in Nevada.

What do the Nevada numbers tell us?

When the overwhelming majority of eligible voters do nothing does that mean they are content with Trump in the White House? Do they believe (wrongly) that their votes don’t matter? Is the problem political lethargy? Indifference? Tacit acceptance?

The fact is that until after-vote survey work is finished we won’t know.

A Handful of Voters Will Decide

What we do know is that a tiny fraction of registered voters could determine who faces Trump. And we now know that there is not much enthusiasm for Sanders in Nevada, a state that is more like America as a whole than either New Hampshire or Iowa, the first caucus state.

Trump won despite only 46% of actual voters favoring him. Trump brags about his not quite 63 million votes, but Hillary Clinton got close to 66 million votes. Add in minor candidates and 74 million Americans voted against Trump.

The big question is whether Trump fatigue weighs so heavily on America that the November election will be determined not by the American people, but by tiny minorities in picking the Democratic Party candidate. Even if Sanders founders in the next few primaries, a minority of Democrats will decide.

And what happens if the vast majority stay home on Nov. 3?

In the end, our government is the result not of what the American people want, but of who votes. Turnout first. Turnout last. Turnout is all that matters.

Ask yourself what it means that in the Nevada Democratic primary the real vote was 9% care and 91% couldn’t be bothered.

I don’t know the answer. What I do know is that we should be actively discussing this. And we should do so not from wishes or fears, but from thoughtful concern about the future, we will soon choose for our nation.