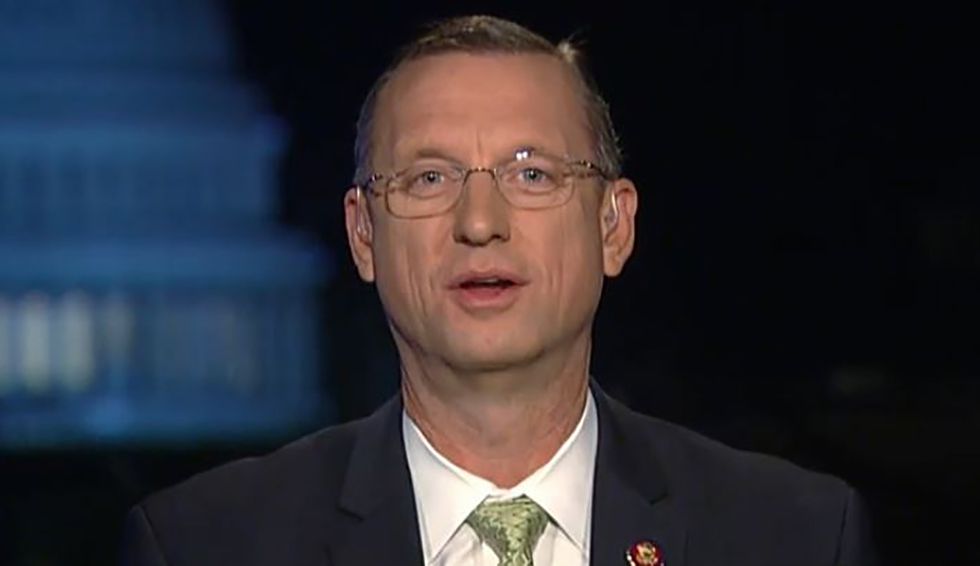 Last month, Rep. Doug Collins of Georgia announced his plans to run for the U.S. Senate seat that was once held by Sen. Johnny Isakson, who retired in December due to illness. The seat is now held by Sen. Kelly Loeffler after he appointment by Georgia Gov. Brian Kemp.

Collins has a very right-wing voting record, from his A rating from the National Rifle Association (NRA) to his vehement opposition to same-sex marriage and Obamacare. But according to some Republicans, Collins isn’t right-wing enough — and an attack ad cites his relationships with black Democrats as proof that he isn’t a true conservative.

The ad, which has been tweeted by the National Republican Senatorial Committee (NRSC), declares that although Collins “wants you to think he’s a conservative,” he “was far less supportive of President Trump” before a U.S. Senate seat became available. According to the ad, Collins has committed a cardinal sin merely by associating with well-known Democrats — and all of the Democrats mentioned in the ad just happen to be African-American:  2018 Georgia gubernatorial candidate Stacey Abrams, Rep. Hakeem Jeffries, and former President Barack Obama.

The ad slams Collins for being “long-time friends with Stacey Abrams” and shows them together in a photo — never mind the fact that Collins and Abrams are seldom in agreement politically. And Collins can be heard saying, “One of my best friends in Congress is Hakeem Jeffries.” Collins and Jeffries have a long list of policy differences, but according to the ad, merely being on polite terms with Jeffries shows that he isn’t sufficiently Trumpian.

Some Twitter users have been quick to point out how ridiculous — and racist — the ad is. Atlanta-based Nate Watkins, @NateWatkins, sarcastically posted, “Oh no, he has black friends. Run him out of the party!” And @ColecaTheGreat tweeted, “Some serious Lee Atwater vibes in this ad” — which seems to be a reference to the notorious Willie Horton ad that President George H.W. Bush used to smear his Democratic opponent, Michael Dukakis, in 1988’s presidential election at the recommendation of the late GOP strategist Lee Atwood.

@JakeVK tweeted, “Seems like y’all think his biggest problem is that he is friendly with African American politicians. What a very cool look for the Republican Party.” And @TeddyKGB was equally cutting and posted, “NOT-SO-SUBTLE MESSAGE: He hangs out with BLACK people! He even seems to LIKE them! The HORROR!”