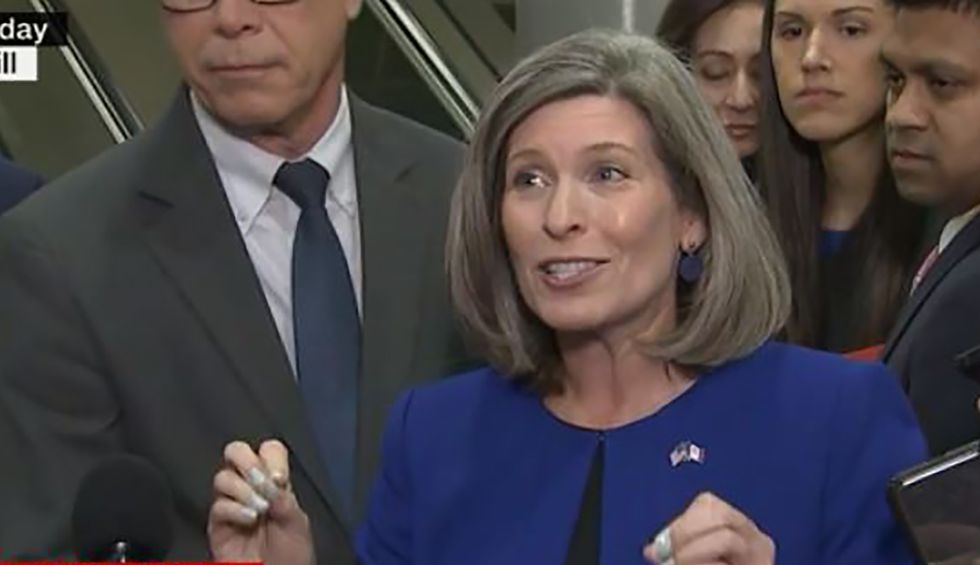 "Again, Joni Ernst has shown that she is willing to push our families into poverty with a smile. The programs she plans to cut are a lifeline for millions of Americans. She should be ashamed."

Republican Sen. Joni Ernst of Iowa told donors at a fundraiser in Washington, D.C. last March that federal spending on non-discretionary programs like Medicare, Medicaid, and Social Security is "out of control" and will require "changes" in the future.

That's according to a 55-second audio clip published Wednesday by Iowa Starting Line. In the recording, Ernst is asked by an attendee whether she is on board with Sen. David Perdue's (R-Ga.) call for cuts to Medicare and Medicaid.

"I think we all are because we understand that our non-discretionary spending is growing like this," replied Ernst, who is up for reelection in 2020. "Everyone focuses on discretionary spending because that is what we can control in Congress. The rest is on autopilot and is out of control. We have to figure out ways to honor the commitments that have been made, but make changes for the future. How we do that, I don't know."

Kimberly Graham, one of five Democrats vying to unseat Ernst in November, tweeted Thursday that "we barely invest in the health and well-being of our people as it is, and Joni Ernst thinks even that is too much."

The audio clip comes months after the Democratic super PAC American Bridge posted a video of Ernst telling a town hall audience in August that members of Congress should negotiate changes to Social Security "behind closed doors" to avoid scrutiny from advocacy groups and the press.

"There is a real issue out there," added the Republican senator, "and as long as we are being hammered as members of Congress for even saying we need to do something about it, you're not going to find people that are willing to step forward and do it."

Eddie Mauro, another Democrat running for Ernst's Senate seat, said the Republican "should be ashamed" of her position on Medicare, Medicaid, and Social Security spending.

"Again, Joni Ernst has shown that she is willing to push our families into poverty with a smile," Mauro tweeted Wednesday. "The programs she plans to cut are a lifeline for millions of Americans."