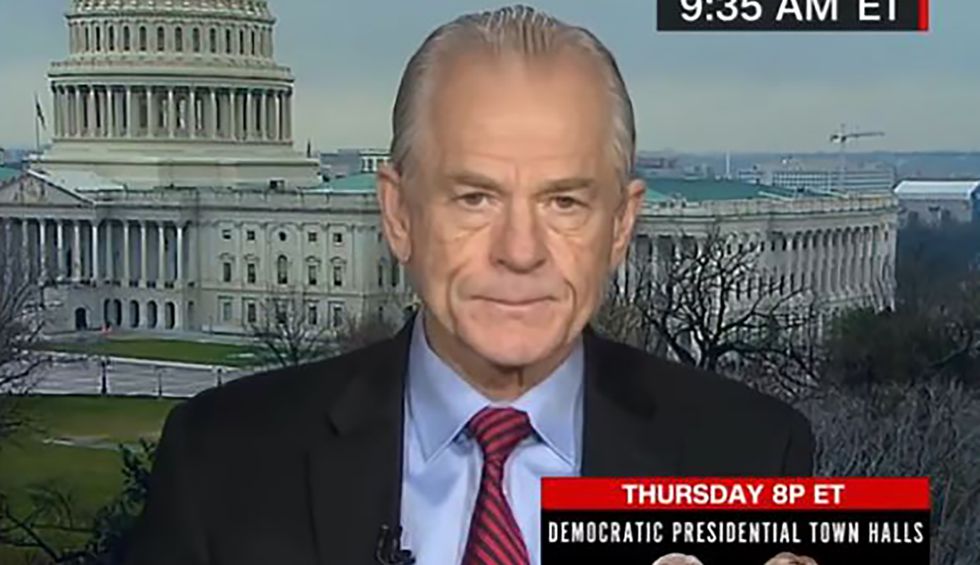 President Donald Trump’s Trade Advisor Peter Navarro had to take one for the team after delivering an especially partisan attack on the Obama economy because CNN anchor Poppy Harlow wasn’t having it.

Navarro repeatedly claimed the economy under President Barack Obama was “horrible,” even after Harlow posted numbers and charts that proved growth under the 44th president was far stronger than growth under Trump.

“It’s a great economy now. All I’m asking you is, wasn’t it a good economy then as well?” Harlow asked Navarro.

“No,” he insisted, launching in to a rant.

“Back in the Obama-Biden years it was horrible,” he claimed, all but ignoring the 2008 worldwide economic collapse that Obama inherited – while sneaking in the former vice president’s name in a particularly nasty partisan swipe, and possibly coming dangerously close to the crossing the line of the Hatch Act.

“It was a horrible economy during the Obama years,” he insisted, forcing Harlow to all but beg with him to listen to facts as she had the numbers put back up on the screen.

“Put your numbers up,” Navarro sneered.

“They’re not my numbers – these are from the Bureau of Economic Analysis.

Harlow told Navarro under Trump the economy has not seen one quarter with growth above 4%, but under Obama it happened four times. She also showed him that job growth under President Obama was 227,000 jobs per month on average for his last 36 months, but under President Trump’s first 36 months it’s just 191,000.

Harlow reminded Navarro that Trump promised to eliminate the national debt if he was given two terms in office, yet the mosrt recent White House budget says that’s not going to happen.

.@PoppyHarlowCNN after President Trump accused Obama of trying to “take credit” for the economy: “It's a great econ… https://t.co/1EQyTKHzLF
— CNN Newsroom (@CNN Newsroom)1582038169.0