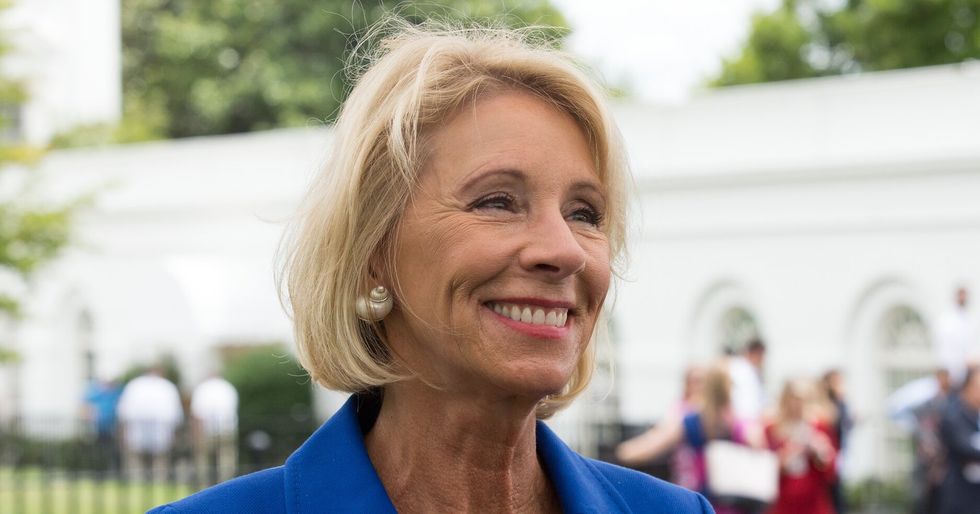 The Accrediting Council for Independent Colleges & Schools (ACICS) accredited a college which appears to have no faculty or students after Secretary of Education Betsy DeVos reversed an Obama era decision to shutter the federal agency after it accredited colleges that defrauded students, according to a new investigation.

The ACICS, which accredited now-shuttered for-profit schools, including ITT Tech, Corinthian Colleges, and Brightwood College, was shut down by former President Obama's administration in 2016. The department argued at the time that the agency, which oversaw 725 schools and more than $3 billion in federal financial aid, "exhibited a profound lack of compliance" with the "most basic" responsibilities of an accreditor.

A judge allowed DeVos, who has often sided with for-profit institutions, to reinstate the ACICS in 2018, The Washington Post reported. A former Obama administration official told the outlet that Devos "ignored her career staff's 57 findings of ACICS's noncompliance." The education secretary similarly came under fire for ignoring career staff when she gutted a debt relief program for students defrauded by the for-profit colleges accredited by ACICS.

After losing dozens of colleges and their membership fees after it was shut down, the agency had a need for new members. It accredited institutions with dubious operations, including a South Dakota "university" which does appears to have "no students, no faculty and no classrooms," according to the joint investigation by USA Today and The Argus Leader.

With its membership down from 290 institutions to just 63, the ACICS accredited Reagan National University in Sioux Falls following Trump's inauguration, when its future was still in doubt. Years later, the college appears to have no social media presence and its website is riddled with error pages. The only mention of the college on Twitter was in reference to a politician in Ghana accused of having a fake degree, according to the report.

Four faculty members listed on the university's website told USA Today they never worked at Reagan and taught at other colleges. Others, including the university's supposed president, appeared not to exist online at all.

An Argus Leader reporter found a building bearing the school's name, but the doors were locked and the offices appeared to be empty. The reporter found crews renovating another location listed by the school in preparation for a new tenant.

An Argus Leader reporter similarly found "no signs of life" when visiting the same office four years earlier when the school was listed as Si Tanka University.

The report calls ACICS' ability to vet schools into question, noting that it took a reporter just "a few hours to find Reagan National does not appear to be functioning." The ACICS accreditation process is supposed to take nine to 18 months, including multiple site visits and extensive documentation review.

ACICS told USA Today that the university "met its standards during the accreditation process" but did not comment on how it verified if the school was real. The agency accredited the school despite later sending it a letter in January 2019 noting that its "campus-level placement rate of 0% is materially below the Council standard of 60%."

The school apparently received more time to demonstrate that its graduates found jobs but received another warning letter in December after a site visit called into question "more existential issues, such as a lack of evidence of a qualified person to run the business programs" and a computer program that "didn't have the materials necessary to teach," according to the report. It was given until Friday to respond.

"ACICS takes this matter very seriously," agency president and CEO Michelle Edwards told USA Today. "The Council is obligated to not only follow the procedures outlined in the (accreditation) criteria, but also to take adverse action against any institution that fails to come into compliance."

After questions from reporters, the university withdrew from accreditation.

Antoinette Flores, an accreditation expert at the left-leaning Center for American Progress, questioned how even the agency's warning letters missed the fact that the school lacked students or any faculty.

"You accredited this institution. How did you miss this?" Flores told USA Today. "I don't think this bodes well for them. They had said that they're turning themselves around."

Along with a lack of any signs suggesting it was an actual university, Argus Leader reporters found that the school had ties to the University of North Virginia, which was raided in 2011 by immigration officials who alleged it was a "visa mill." The school shuttered in 2013 but resurfaced later that year using the same South Dakota address as Reagan National.

The operation appears to have moved to South Dakota, because it has "among the laxest rules for colleges in the country," according to the report. When the report was published, both Reagan National and the University of Northern Virginia were listed in "good standing" with the state.

Despite reviving an agency that clearly failed to vet Reagan National, the Education Department defended its decision to save the ACICS.

"The department expects all accreditors to hold schools accountable to their accreditation standards, and if they don't, we will hold the accreditors themselves accountable," Education Department spokeswoman Angela Morabito told USA Today. "Without the department conducting an independent investigation of the school, it appears that ACICS followed proper procedure, applied the appropriate sanctions, and the school is no longer accredited."

But rather than step up vetting, DeVos has repeatedly sought to cut rules related to accreditation since taking office.

"It's another complete failure of the triad: of the state, of the Department of Education, of the agency itself," Flores told USA Today. "It's a really big deal."