Anti-Trump protester in MAGA community unloads on his neighbors: 'What's wrong with these people?' 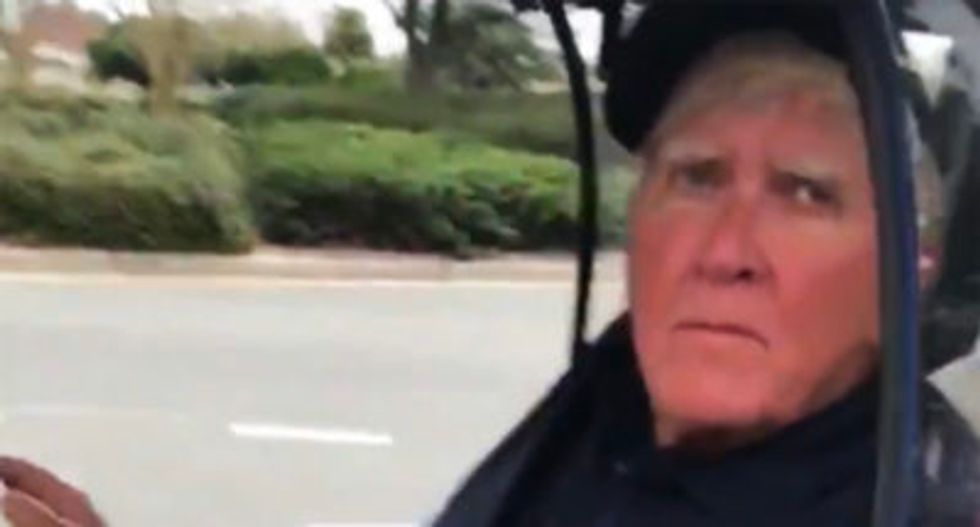 On Saturday, the Washington Post profiled Ed McGinty, the Florida retiree in The Villages who went viral last week for setting up with a golf cart covered in signs labeling President Donald Trump a "racist," a "filthy pig," and a "sexual predator."

"Raised Irish Catholic in Philadelphia, the 71-year-old retired real estate broker has always been a Democrat, just like his parents before him," wrote Brittany Shammas. "But the last time he remembers being especially politically motivated was when Hubert Humphrey ran against Richard Nixon in 1968. After that, he’d wake up the morning after Election Day, find out George W. Bush or another Republican had won and say, 'Okay, well, back to work.'"

The election of Trump was the first time since the 60s that woke a political fire in McGinty. "When Trump won, it changed the whole ballgame for me. I thought to myself, 'This was supposed to be a joke. What’s wrong with these people?'"

The Villages, one of Florida's most famous retirement communities, is extremely conservative. Republicans outnumber Democrats two to one. As a consequence, McGinty has received a great deal of abuse for his protest, being labeled a "baby killer" and a "dumbass" by some local residents. "These people down here are emboldened because there’s so many of them," said McGinty said. "And they really try to intimidate any Democrat that even sticks his head above water."

He added that he won't be silenced. "I’m proud that I’m standing up for what’s right. There’s never been a doubt in my mind that what I’m doing is right."

Chris Stanley, president of The Villages Democratic Club, says that the community has become far more polarized than it used to be. "There was always a divide, but we coexisted. There would be some good-natured back and forth, but your neighbors were your friends. You'd have dinner with the Republicans because it wasn’t a big deal … These days, the division in the country shows up best in The Villages because now the Republicans, they won't golf with you anymore, or you don't want to golf with them."