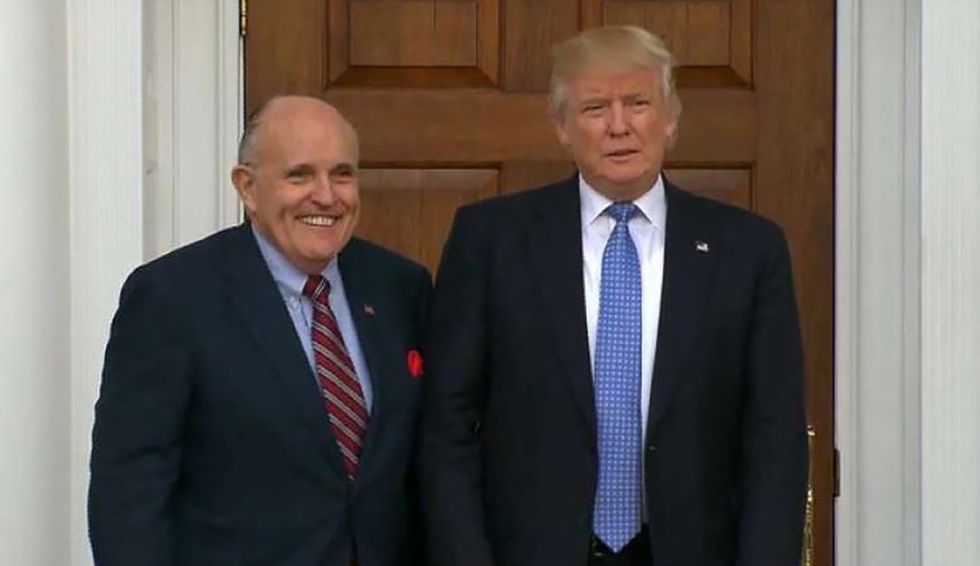 The president’s personal lawyer and former New York City mayor Rudolph Giuliani wrote an opinion piece, “The Supreme Court Should Step In to Rule this Impeachment Unconstitutional.” The Washington Post reports him as donning the “constitutional scholar” cap in “very colorful terms.”

Giuliani said earlier he was prepared to testify at the president’s upcoming impeachment trial and would even try the case. Because Giuliani has mystified observers for some time, I am responding to a request to analyze his words.

First, allow me to remark on methodology. Ordinarily, I state that analyzing a public figure is complex and have previously declined comment on Kim Jong-un or Vladimir Putin. To offer a responsible, medically sound analysis, an abundance of high-quality information is necessary.

Rarely do we have the amount that Donald Trump offers, with decades of candid interviews and clips; numerous collateral reports by close associates, many under sworn testimony; and direct, unfiltered, near-hourly reporting of thoughts. A full diagnosis needs more, although a personal examination is not the deciding factor, as it can in some cases be harmful in assessing personalities that deceive or charm.

With Giuliani, however, I can use different means.

I can do so because, like many of Trump’s followers, he seems to be an extension of the president’s psychology.

How is this possible? There can be a contagion of symptoms, as in the phenomenon of “shared psychosis,” further explained below. I also have some references on Giuliani as a long-term New Yorker that corroborate my assessment. Finally, I feel justified in sharing the findings because of the danger he poses. As a strong adherent to the original Goldwater rule, I am opposed to commenting frivolously on public figures unless they pose a danger to public health.

I have regularly been “translating” Trump and his followers as a public service, using my understanding of the president’s defense mechanisms, repeatedly validated against other data. Whatever he says about others is very revealing about himself. I apply the same method for his followers because their shared psychosis, or the transmission of mental symptoms among close contacts over time, including via the media or the Internet, renders their psychological structure extremely similar.

Unlike Trump, I have closely interacted with many Trump supporters and can personally attest to their uniformity in many psychological respects. Especially when the primary pathology rests in a powerful figure, otherwise healthy people can adopt his cognitive distortions, delusions and other symptoms as their own. My experience with multiple cases in state hospitals and among gangs in prisons, in my 22-year career as a forensic psychiatrist, has been impressive. Shared psychosis disappears just as dramatically when the contact is interrupted. Consider Trump’s former fixer Michael Cohen, now jailed.

Here is a sample “translation” of Giuliani’s words, or interpretation of what his subconscious may be telling us, from his opinion piece: “Republicans’ obsession from day one not to impeach President Donald J. Trump, without regard to substance or process, led us to change the grounds for our argument every couple of months. In doing so we have punted everything from Russian collusion to obstruction of justice, to quid pro quo, to bribery.”

By offering to try the case several days ago, Giuliani revealed a grandiosity so high, he does not seem to notice how he often harms his client or reveals how corrupt he is willing to be by trying a case for which his client is defendant, and he potentially a co-conspirator. When he said he would prosecute “as a racketeering case,” he was inadvertently “confessing” his and the president’s level of criminality by projecting it onto rival Joe Biden. He even narcissistically added that he “kind of invented” such prosecutions.

DCReport’s editor-in-chief, investigative reporter David Cay Johnston, says not so. Johnston countered that Giuliani’s subordinates tried and won “the RICO (Racketeer Influenced and Corrupt Organizations) cases Rudy claims credit for” and that other prosecutors won cases “years ahead of his subordinates.” The RICO law, Johnston says, was the brainchild of a professor, G. Robert Blakey.

This pattern is consistent with my own experience of Giuliani as mayor of New York City, where I grew up in an environment of violence that I once considered the norm.

I witnessed, through the late 1980s and early 1990s, numerous activist groups entering our neighborhoods, building gardens and bringing art projects. When one of them came into my bullet-hole- and gang-ridden school, it had an inspirational effect on all the teenagers, including myself. Robust literature now proves that positive reinforcement is far more effective in preventing violence than any level of policing or punishment. Thus, when the mayor belatedly intervened with his police force and claimed all credit for the drop in violence, it already seemed disingenuous then; I know it to be blatantly false now.

Why is this relevant? I believe it is important for mental health professionals to make distinctions, where applicable, between normal style and pathological traits that can cause harm.

A pathologically narcissistic individual, for instance, would not be able to handle power—even as one hungrily seeks it—but would more likely develop delusional levels of grandiosity or impunity. Delusions, in turn, are more effective at mobilizing mass psychology than rational strategy, and puzzling features emerge even from formerly respectable attorneys such as Jonathan Turley and Alan Dershowitz.

We have seen a comical and innocuous-seeming Trump morph into a grotesque authoritarian willing to destroy every facet of civilized society to build and maintain his cult of personality. His irrationality ironically helps make his supporters fervently anti-interventionist one day and supportive of an obvious wag-the-dog war the next, according to his desires.

Power may corrupt ordinary individuals, but it radically transforms dangerously pathological figures beyond what people can imagine or prepare. Needless to say, those who are suffering from similar narcissistic wounds are the first to be attracted to such a power figure and to succumb to a shared psychosis. Giuliani may exemplify how severely it can affect a person.

Dr.  Bandy X.  Lee is a forensic psychiatrist at the Yale School of Medicine, president of the World Mental Health Coalition and editor of  The Dangerous Case of Donald Trump: 37 Psychiatrists and Mental Health Experts Assess a President.