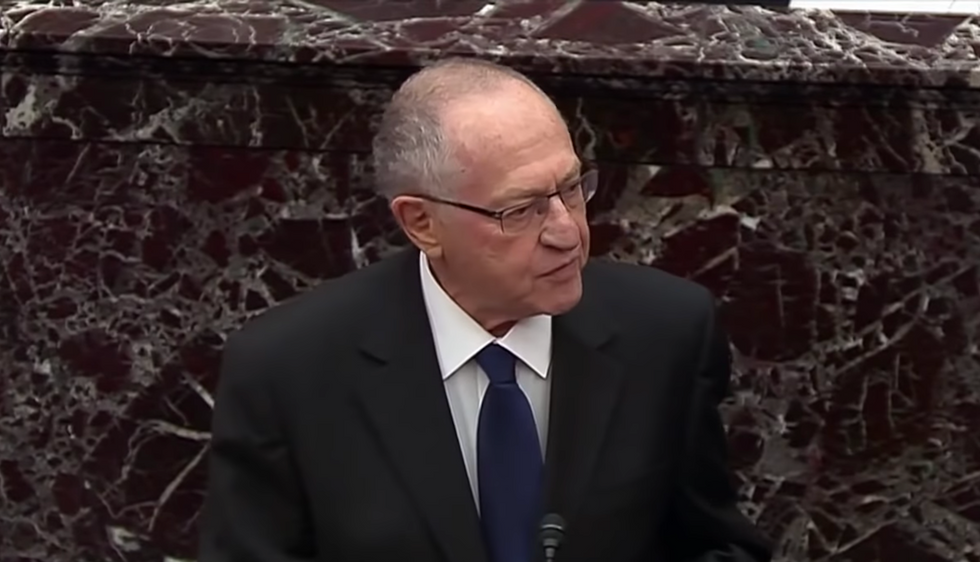 President Donald Trump's lawyers are staking out bold ground by claiming that abuse of power — which is, to many, the quintessential impeachable offense — is not actually grounds for removing a president at all.

Criminal defense attorney Alan Dershowitz had been the most prominent advocate of this assertion, even though both the constitutional scholar who Dershowitz cites in his argument contradicts the interpretation, and the Republicans' other witness on constitutional matters, Jonathan Turley, doesn't buy the extreme claim.

But beyond just arguing that "abuse of power" is insufficient for an impeachment charge, Dershowitz made the even greater leap that there is something inherently illegitimate about trying to discern whether the president had a corrupt motive in his act.

He said that to charge Trump with abuse of power, Democrats are attempting to "psychoanalyze the President and attribute to him a singular, self-serving motive."

This, he argued, “cannot be the legal basis for a serious accusation of abuse of power that could result in the removal of an elected president."

On Monday, another of Trump's lawyers, Pat Philbin, echoed this argument, asking: "How are we supposed to get the proof of what’s inside the president’s head?"

But such arguments will only appeal to people who have no familiarity with criminal law. In other words, Trump's lawyers are hoping to pull one over on their audience with this argument.

Reuters reporter Brad Heath on Twitter said in response to Philbin's question: "This is a thing that happens at many, many criminal trials. Did the defendant intend to shoot someone? Did he know that he had a duty to report income? Most criminal laws require that prosecutors provide evidence of subjective intent."

"His characterization of the law simply is unsupported," she told reporters after Dershowitz's presentation in the Senate trial. "He is a criminal law professor who stood in the well of the Senate and talked about how law never inquires into intent and that we should not be using the president's intent as part of understanding impeachment."

She continued: "Criminal law is all about intent. Mens rea is the heart of criminal law. That's the very basis of it. So it makes his whole presentation just nonsensical. I truly could not follow it."

Dershowitz challenged Warren's criticisms on Tuesday on Twitter, saying she "willfully mischaracterized what I said, claiming that I spoke about 'intent.' I challenge her to find that word anywhere in my presentation. I talked about the difficulty of discerning mixed motives."

But Dershowitz didn't distinguish between intent and motive in his remarks, and it's not clear why this would save his argument. He suggests that knowing what is "actually" in a defendants' mind is unknowable, but this would apply to intent as much as motive. Further, he's the one who brought up the idea of determining Trump's "motive" at all. House impeachment managers could simply say that Trump's corrupt intent as a part of the illicit quid pro quo he tried to arrange with Ukraine, to the benefit of his campaign, is what matters. And "corrupt intent" is an established part of criminal law; it featured prominently in Special Counsel Robert Mueller's discussion of Trump's potential obstruction of justice during the Russia investigation.

Alan Dershowitz to @GStephanopoulos: "You cannot question a president's motives when the president acts. If a presi… https://t.co/XM1qYKjUta
— Evan McMurry (@Evan McMurry)1531056540.0

But he's offered no real reason to justify these assertions.

"The crux of any bribery or bribery type case is the defendant's desire to obtain something of personal value. This is actually intent, not motive. So with Trump, the very question is whether he withheld aid with intent to receive the personal benefit of dirt on Bidens," she said on Twitter. "Trump's motive for getting the dirt (He fears Joe winning, hates Hunter, just rolls that way) is secondary. The important question is whether he sought a personal benefit. If not, it's not bribery or abuse. If so, then it is bribery or abuse."

She added: "Dersh must realize this argument is bunk. We divine intent from evidence all the time."