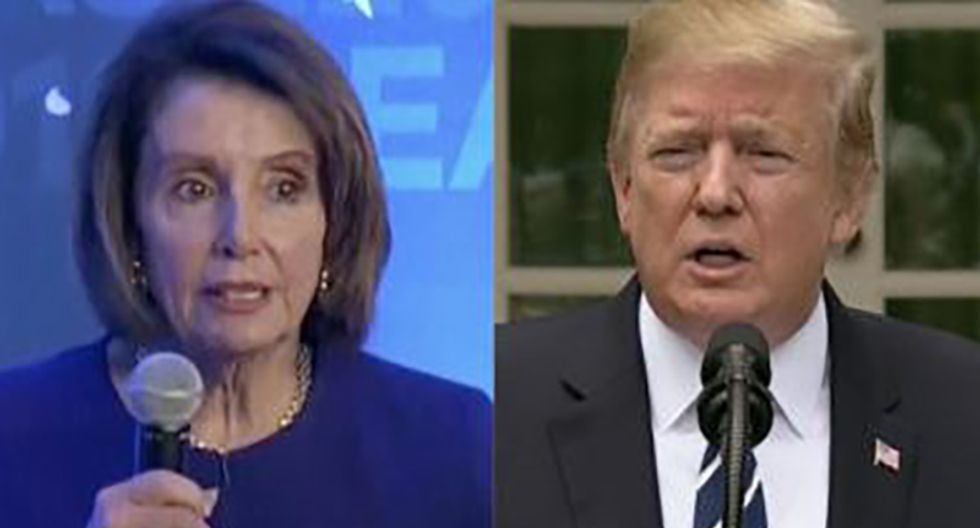 The conventional wisdom is Nancy Pelosi has no leverage in her bid to force Mitch McConnell to hold a fair impeachment trial in the Senate. The thinking is the House speaker can delay sending articles of impeachment, but the Republicans there aren’t in any hurry. She can waste more time. The Senate majority leader is still going to “win.”

I’ve always thought the conventional wisdom is myopic. Pelosi does not have to bear the weight of a lying, thieving, philandering sadist making a fetish of exoneration. McConnell, however, does. When they impeached him, the Democrats cut Trump in ways he’s never been cut. He’s bleeding. The only way to stop it, from Trump’s point of view, is for the Senate to clear him, and maybe not even then. Trump is, has been and always will be weak. Impeachment made it apparent to all. His ego won’t let it go. The only thing he wants to know from McConnell is when they’re going to acquit him.

Moreover, the conventional wisdom does not account for ongoing reporting about the president’s extortion of Ukraine’s Volodymyr Zelensky. The Center for Public Integrity and Just Security sued for access to administration emails showing the Pentagon was fully aware blocking millions in aid money was illegal. The US Constitution and federal statutes gives the Congress, and only the Congress, authority over how money is spent and why. Trump can’t legally withhold money allocated by the Congress for Ukraine even if he did do so to encourage anti-corruption efforts. It’s not his call. The Pentagon made its objections clear, but Trump ordered the money withheld anyway. In other words, the president knew he was breaking the law even as he was breaking it.

Though the articles of impeachment are about abuse of power and obstruction of the Congress, not about this particular crime, news of Trump’s lawbreaking affirms them in effect. It may also bring more pressure to Republican senators facing reelection this year. Protecting his majority is the only political factor McConnell truly cares about.

The conventional wisdom does not account for recent events either. It’s becoming clearer each day the president didn’t have a good reason two weeks ago for bringing the United States to the brink of war with Iran. The administration said Trump was justified in ordering the assassination of Qassem Suleimani. It said Iran’s top general in charge of its proxy wars in the Middle East was planning an “imminent attack.” Well, turns out the administration was—how do I say this?—covering Trump’s ass.

On Sunday morning, Mark Esper was explicit in saying he saw “no hard evidence that four American embassies had been under possible threat when President Donald Trump authorized the targeting of Iran’s top commander,” according to the AP. Compare that to this morning’s reporting from NBC News’ Carol E. Lee and Courtney Kube. They said the president authorized Suleimani’s assassination seven months ago. They wrote: “The presidential directive in June came with the condition that Trump would have final sign-off on any specific operation to kill Suleimani” (my italics).

That leaves us to infer a reason based on the known context of the president’s choice. That known context was captured by the Wall Street Journal. Deep inside a story about Trump’s national security team, seven reporters said: “Mr. Trump, after the strike, told associates he was under pressure to deal with Gen. Suleimani from GOP senators he views as important supporters in his coming impeachment trial in the Senate” (my italics).

The president authorized the killing in June but waited to sign off on it until right before his impeachment trial was set to begin in the Senate. It is reasonable, therefore, to suggest Trump ordered a man’s death for political reasons, not for national-security reasons (there aren’t any). I suggest he tried creating an image of himself as a war president too important to remove from office. I suggest Suleimani’s assassination is just one more way Trump has abused his power, and hence affirmed his indictment.

Does this mean Pelosi will “win”? I don’t make such a claim. But the politics of this intra-branch stand-off is more complex than many in the Washington press corps believe. Pelosi has more leverage than she appears to. McConnell has less. She doesn’t stand with a president continuing to commit impeachable acts. He does. Even if the Senate clears him, McConnell’s conference must explain acquittal to voters in the face of inevitable reporting showing even more wrongdoing by the president. Trump has always trod impotently. Are the Senate Republicans going to follow his path?