Trump may not be removed by the Senate, but he's still terrified of his trial — here's why 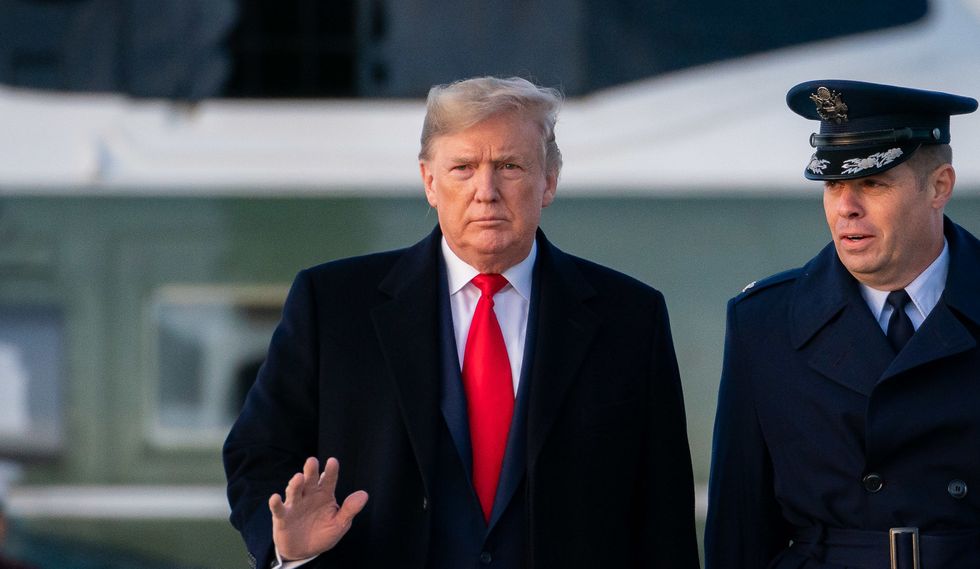 Donald Trump is scared. The Senate trial following his impeachment for a blackmail and campaign cheating scheme starts next week, and it's driving him to distraction. He was supposed to host a lame event at the White House on Thursday to bolster fake concerns that white evangelicals are being oppressed, but blew off pandering to his strongest supporters for an hour, likely because he couldn't pry himself away from news coverage of the impeachment trial's kickoff. After ending the event swiftly, Trump then tweeted angrily, "I JUST GOT IMPEACHED FOR MAKING A PERFECT PHONE CALL!"

(As with most things the president says, this was untrue — he was impeached weeks ago, in December.)

Trump's cold sweats are significant, because everyone who has been following this case knows that the Senate will acquit him. Not because he's innocent — no one who has actually consulted the evidence is foolish enough to believe that — but because Senate Majority Leader Mitch McConnell and the Republicans who control the Senate decided long ago that they would cover up for their shamelessly corrupt president no matter what he does. With such an assured outcome, Trump's fears seem overblown and silly, even for someone crippled by sociopathic narcissism and its accompanying paranoia.

But it's also true that high-profile travesties of justice, such as the one Senate Republicans are currently preparing to commit, can often provoke major political backlash. Getting a jury to acquit the obviously guilty can, as history shows, cause a public that's already outraged about the crime to get even more furious. That, I suspect, is what Trump is sweating.

What the Senate is about to do is akin to the practice of jury nullification. That's where a jury decides that either they don't think the crime should be a crime at all, or that they believe people like the defendant should above the law, and so refuse to convict no matter how guilty the defendant is. This something that in theory, and sometimes in practice, can be used for good as when a jury refuses to throw someone in prison for a low-level drug offense, or refuses to enforce a law restricting free speech. But historically in the U.S., jury nullification has tended to be used to uphold injustice and reinforce racist or sexist systems of power.

In other words, exactly what Senate Republicans are planning to do. That becomes more obvious every day as more evidence of Trump's guilt comes out, from the revelations by Rudy Giuliani's former associate Lev Parnas to the Government Accountability Office declaring that Trump broke the law by withholding military aid to Ukraine.

The most disturbing and frequent historical examples of jury nullification come from the Jim Crow South, where it was normal for all-white juries to acquit Klansmen and others who committed racist murders — not because they genuinely believed they were innocent, but because they believed it should be legal for white people to murder black people in cold blood.

The most famous of these cases was that of Roy Bryant and J.W. Milam, two white men who murdered a black teenager named Emmett Till in Mississippi in 1955. That the men had committed the crime was not in doubt — they described the murder in great detail to a reporter for Look magazine. But the all-white, all-male jury refused to convict, and didn't really bother to hide the fact that they did so because they didn't think white men should be punished for killing black people.

Unfortunately, this problem of white jurors refusing to convict in cases where the victims are black has not gone away. For instance, in the 2012 Florida killing of black teenager Trayvon Martin by George Zimmerman, a nearly all-white jury voted to acquit Zimmerman, even though Martin was apparently just walking home after buying some snacks and Zimmerman had been warned by a 911 operator not to pursue him — and even though Zimmerman's only basis for suspecting Martin of anything was his race. The one woman of color on the jury has since publicly lamented the process and describes what sounds a lot like bullying from the white women in the room.

The defendants in those cases walked free, but the outrage that followed had political ramifications. Till's murder helped draw national attention to the evils of the Jim Crow South and helped bolster support for the burgeoning civil rights movement. Martin's murder, decades later, helped build support for what became known as the Black Lives Matter movement.

Sometimes the backlash to injustice can be earth-shaking, as happened in 1992, when Los Angeles was torn up by riots in the wake of the acquittal by a majority-white jury of four cops who were caught on video severely beating Rodney King, a black motorist they had pulled over for speeding.

These are all racially loaded cases, of course, which sets them apart from Trump's impeachment over his efforts to cheat in the 2020 election and his cavalier willingness to use government resources to force foreign leaders to help him do so. Trump's inevitable acquittal in the Senate won't be quite the gut-punch so many people feel when white men get sprung for committing racist crimes.

Still, the social circumstances of Trump's upcoming acquittal go straight back to those same forces of white supremacy that have led to so many other travesties of justice in the past. After all, the main reason Senate Republicans are averse to taking what seems to be an easy way out — convicting the obviously guilty Trump and letting his Republican Vice President, Mike Pence, take over — is because they fear crossing the notoriously loyal Trump base, who represent their only possible chance of holding onto the Senate or retaking the House this November.

And the reason that base is so loyal, as with many things in this country, relates to racism. Trump's base is motivated by what sociologists delicately call "racial resentment," which is a nice way of saying that these white people see changing demographics in the U.S. and growing challenges to white domination, and they're angry about it. Furthermore, they see President Trump, a blatant and shameless racist, as their best weapon to fight to preserve a system of white supremacy.

As long as Trump keeps delivering on the racism — which he has done in a myriad of ways — his base doesn't care what crimes he commits. After all, Trump committed his crime to hang onto power so he can continue to inflict cruel racist policies on our entire nation. In that sense, this case shares a common root with those more explicitly racist acquittals of the past. They're all part of the long and ugly American tradition of letting white people get away with crime, so long as they do it in the name of white supremacy.

But watching obviously guilty people get away with it can also have a galvanizing political effect, and not just when the crime itself is racially provocative. As the #MeToo movement and the Women's March demonstrated, Americans have also been roused to outrage when men commit sexual assaults and get away with it. And the ongoing fascination with gangsters who finally get caught after evading justice for years — Al Capone, Whitey Bulger, John Gotti — suggests a real hunger to see bad guys pay for what they do.

That's what Donald Trump fears: That his acquittal will not be read as an exoneration, but as yet another famous miscarriage of justice that leads to outrage across the nation. Let's hope his worst fears come true.