Trump is attracting a new crop of big donors — including some Republicans who shunned him in 2016: report 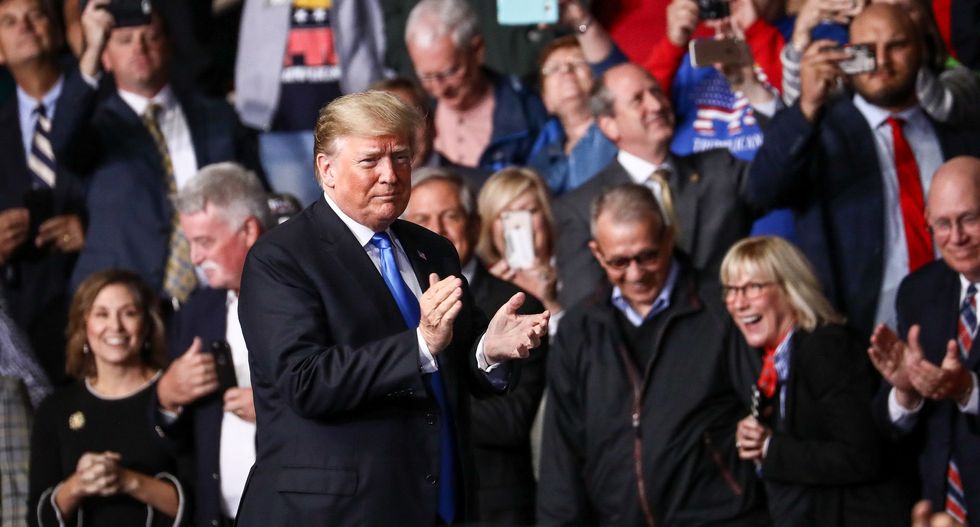 Candidates in the 2020 presidential election are pulling in massive fundraising numbers. Sen. Bernie Sanders raised $34.5 million in 2019’s final quarter, while Donald Trump raised $46 million during that period. And according to a report by Michelle Ye Hee Lee and Anu Narayanswamy for the Washington Post, Trump is attracting his share of new donors who are also large donors.

“Trump’s vaunted political money machine is helping drive record sums to the Republican National Committee, and not just from the same donors who supported him in 2016,” Lee and Narayanswamy explain in their Post article. “Enticed by exclusive gatherings and ecstatic about the president’s tax cuts, an eclectic new crop of donors is going all in — giving five and six figures to support his reelection.”

The Post reporters describe some of the new Trump donors, and they range from Dan Costa (who runs four apparel companies in Northern California) to Dallas-based real estate developer Ejike Okpa. Costa donated $37,500 recently, and Okpa has donated tens of thousands of dollars as well.

“The influx of these donors represents a shift for Trump, who criticized other candidates’ reliance on wealthy backers during the 2016 election,” Lee and Narayanswamy report. “This time, his campaign is actively wooing them, holding glitzy fundraisers that give people who donate large amounts a chance to mingle with his inner circle and often snap pictures with Trump himself.”

Lee and Narayanswamy note that in 2020, Trump is “supported by a more traditional source of party money: long-time GOP donors who shunned him during his 2016 campaign. One example is Dan and Farris Wilks, two billionaire siblings who have worked in the fracking industry in Texas and have “given a combined $100,000 toward the president’s reelection.” The Wilkes Brothers supported Sen. Ted Cruz over Trump in the 2016 GOP presidential primary but are supporting Trump in 2020.

Lisa Spies, a veteran GOP fundraiser, told the Post that Trump “has a whole new crop of donors. A lot of these people have never been involved before.”

“The (2020 Democratic) nominee will be broke, as (2012 GOP presidential nominee Mitt) Romney was against us,” Messina told the Washington Post. “One point to look at is how much money Trump and the (joint committees) are raising. I have never seen spending like it. And it’s a lot on rallies, which are expensive and speak to the base.”