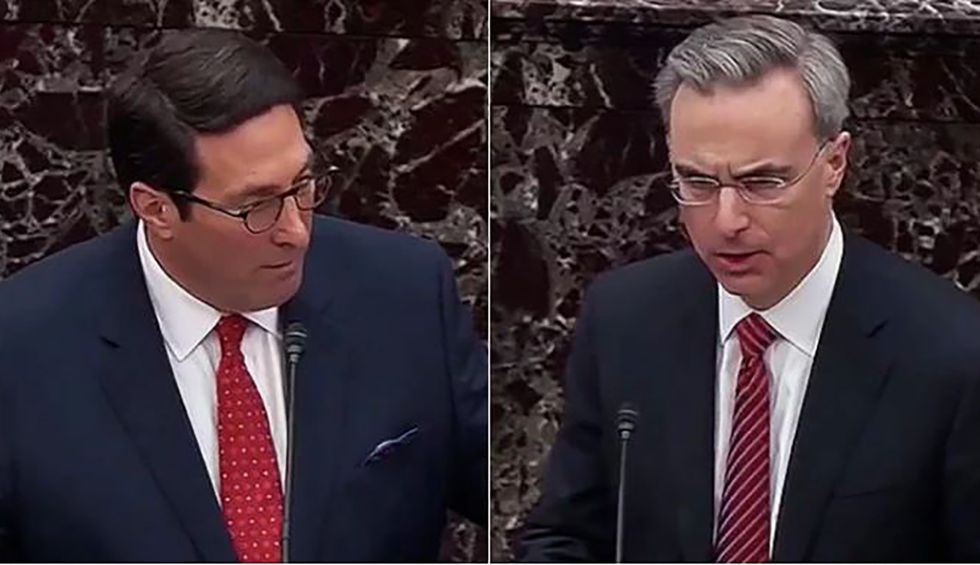 According to a report from Politico, two of Donald Trump’s attorneys representing the president in his impeachment trial are risking possible damage to their own careers that could, at worst, put them in the company of disgraced former Trump lawyer Michael Cohen and former New York City Mayor Rudy Giuliani who is currently under federal investigation.

Beginning, “They’ve been accused of orchestrating a criminal conspiracy. They’ve been dubbed ethically compromised. They’ve been labeled liars. They could even be called to testify in the impeachment case they were hired to combat. In the opening days of Donald Trump’s Senate trial, it has at times felt like the president’s lawyers are his co-defendants,” the report notes that the attorneys, specifically Jay Sekulow and White House counsel Pat Cipollone, have embraced their roles defending Trump but at their own peril, given the president’s history with lawyers doing his bidding.

“It’s a theme that has been replayed throughout Trump’s life: The lawyers he brings in to authorize and defend his behavior end up in their own legal morass. Trump’s longtime legal fixer, Michael Cohen, is doing three years in federal prison for his election-season role in paying off women who alleged affairs with Trump. Former White House counsel Don McGahn ended up as a star witness for special counsel Robert Mueller after he had a front-row seat to Trump’s potential obstruction of justice. Rudy Giuliani has hired a team of criminal defense attorneys as the Justice Department investigates his recent behavior while serving as personal counsel to the president,” Politico reports.

“Even before opening arguments, House Democrats warned White House counsel Pat Cipollone that they have evidence showing he’s a material witness in their impeachment case and that he should consider removing himself from the president’s defense team for ethical reasons or risk ‘seriously damaging the fairness of the trial,'” the report continues, which led Rep. Jerry Nadler (D-NY) to state, “The president’s counsel has no standing to talk about lying.”

What should be concerning to Cipollone and Sekulow are charges that are lingering on the fringes that could come back to bite them after becoming the face of Trump’s Senate defense.

In his interview with Rachel Maddow last week, Giuliani associate Lev Parnas pointed the finger at Sekulow saying the attorney “was well aware of Giuliani’s lead role in the Ukraine pressure campaign,” before adding that Sekulow “didn’t agree with what Rudy was doing.”

“Backing up his claims, Parnas supplied House investigators with an October 2019 email showing Sekulow spoke to the president about having John Dowd, a former Trump lawyer, represent Parnas as congressional investigators sought evidence about the Ukraine scheme,” Politico reports, before turning to Cipollone’s involvement in possible presidential obstruction — a key element in Trump’s impeachment.

“Cipollone is seen as someone in the middle of several episodes tied to the impeachment probe.” the report notes. “He’s the boss of John Eisenberg, the top White House national security lawyer whom several witnesses have identified as someone with direct knowledge of the president’s Ukraine actions. Cipollone has also signed off on several letters the White House sent to the House rejecting its requests for materials. The refusal to engage later led to a second article of impeachment claiming the president obstructed Congress.”