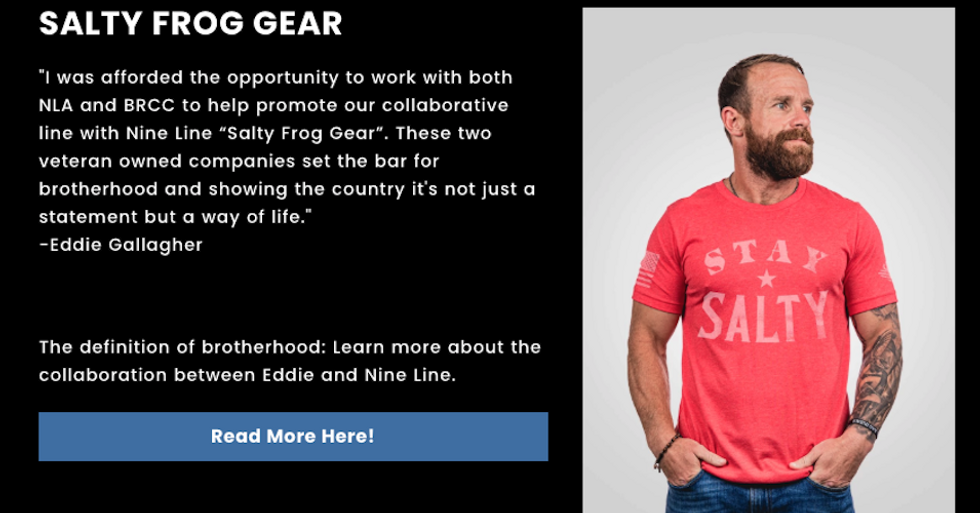 Navy SEAL Chief Petty Officer Edward Gallagher, who was granted clemency this fall from President Donald Trump for posing with the body of a dead Iraqi child, is hawking t-shirts and supplements online in a bid to become a conservative influencer—a move that generated outrage from disgusted progressives.

During his time in Iraq, Gallagher allegedly committed a number of war crimes, including killing a 15-year-old. Gallagher was acquitted of all crimes other than posing with the child's body; the president granted Gallagher clemency in November.

Gallagher's new job as an influencer and promoter for Salty Frog Gear was featured in a New York Times article Tuesday that described how the SEAL is using "his controversial past as a springboard to social media followers and branding opportunities":

Following the lead of many micro influencers, Chief Gallagher's Instagram account has also endorsed veteran-owned coffee beans and muscle-building supplements with macabre names like Double Tap and Total War. Like a sponsored athlete of the world's most dangerous sport, he regularly shows off the logos and clothing of a number of right-wing veterans' groups that push a distinct brand of patriotism, including an apparel brand run by the SEAL veteran who made the knife Chief Gallagher was accused of using to kill a captive. Along with all sorts of items emblazoned with the logo "KILL BAD DUDES," the site sells a "Waterboarding Instructor" shirt.

As Common Dreams reported in December, Gallagher's behavior while deployed to Iraq was so heinous that his fellow SEALs referred to him as "toxic," "freaking evil," and a murderer who "just wants to kill anybody he can."

Trump has called Gallagher "one of the ultimate fighters."

Observers sounded off on Twitter over the SEAL's new job and the Time's decision to promote him.

Gallagher's past, author Elon Green said, makes clear that the SEAL is a dangerous man.

"Edward Gallagher is a serial killer who pretended to be a Navy SEAL," said Green.