'The only one I didn't want her to pick': Recording of Trump private dinner shows he feared Bernie Sanders on 2016 ticket 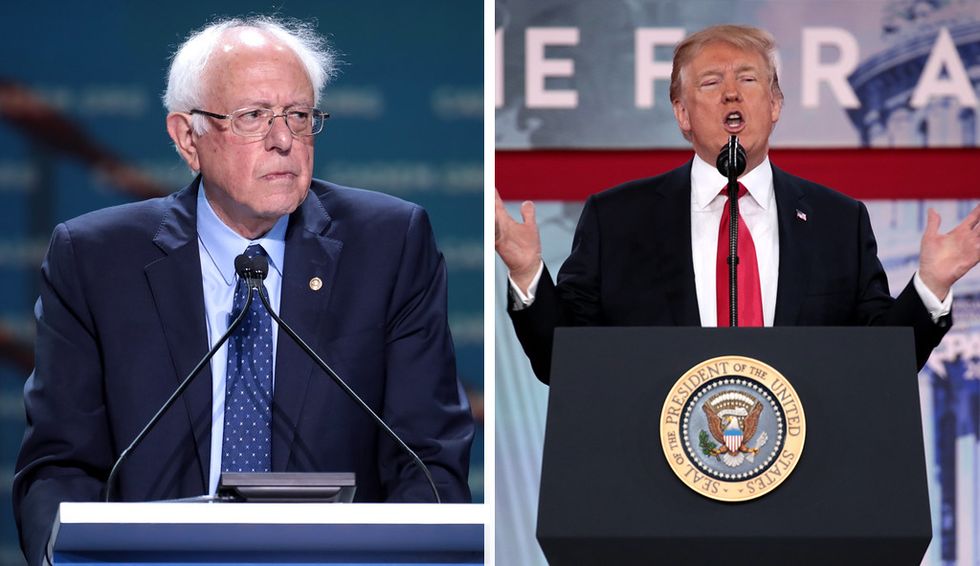 A nearly 90-minute audio recording of a private dinner that took place with numerous individuals and President Donald Trump in 2018 was made public Saturday evening by the legal team of Lev Parnas, a close associate of the president's personal attorney Rudy Giuliani, in which the president can be heard saying "take her out" in reference to former U.S. Ambassador to Ukraine Marie Yovanovitch—a key witness in the impeachment trial now in the U.S. Senate.

Trump also says in the recording that he was relieved that he didn't have to face off against Sen. Bernie Sanders (I-Vt.) in the 2016 election.

Listen to the audio recording, as released by VICE (Trump begins speaking at approximately 2:28):

The recording, according to CNN,

was made by another Giuliani associate, Igor Fruman, and shared with Parnas shortly after the dinner, according to Bondy. Fruman's attorney declined to comment.

Only the first three minutes of the tape include visuals, and Trump can be seen briefly when he approaches the rectangular dining table set with red bouquets of flowers. The remaining portion of the recording is only audio.

The conversation involving Ukraine begins about 40 minutes into the 1-hour-and-24-minute recording. During that discussion, Trump asks a person who appears to be Parnas how long Ukraine would "last in fight against Russia." Parnas says "without us, not very long," and another person chimes in, "about 30 minutes." Months later, Trump would try to cut off military aid to Ukraine.

In its reporting, VICE notes the "five wildest things" Trump had to say during the conversation—a discussion at one point he can clearly be heard saying is "off the record."

Among the items deemed the wildest was a comment Trump made about current 2020 Democratic candidate Sen. Bernie Sanders (I-Vt.). In the recording, Trump said he was glad former Secretary of State Hillary Clinton didn't pick Sanders as her 2020 running mate—citing his tough stance on U.S. trade policy.

"Because [Sanders'] a big trade guy," said Trump. "You know he basically says we're getting screwed on trade. And he's right."

"Had she picked Bernie Sanders it would've been tougher. He's the only one I didn't want her to pick," Trump told the people in the room.