Republicans mock Rep. Ilhan Omar for having PTSD over Iran conflict after growing up as a war refugee 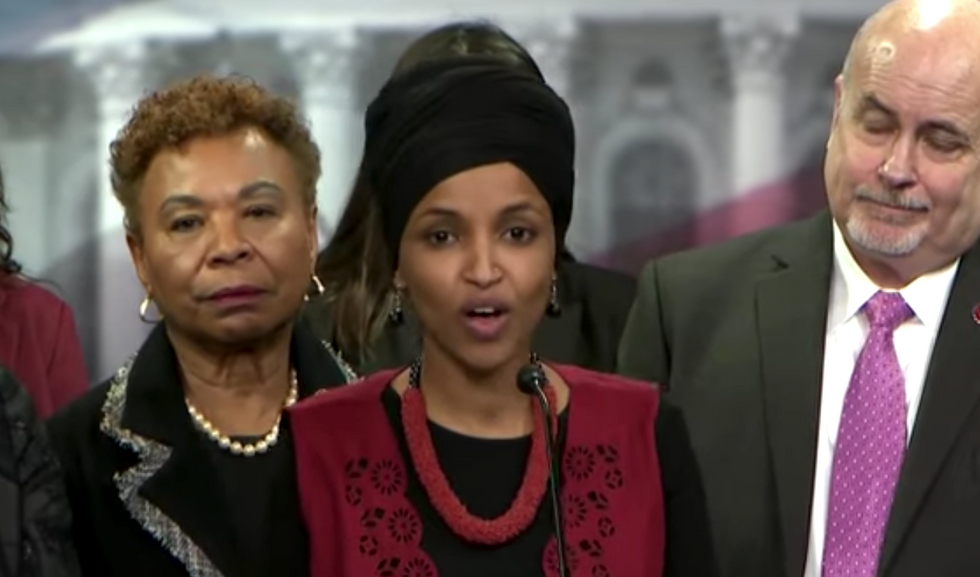 When a woman of color has the audacity to talk publicly about her pain, criticism is often not only likely but expected. It’s why so many of us opt out, but Rep. Ilhan Omar of Minnesota has not. In the days following President Donald Trump’s authorization of an air raid, killing Iranian Gen. Qassem Soleimani, Omar spoke up about how the resulting threatened retaliation and presidential antagonizing affected her. "I feel ill, a little bit, because of everything that is taking place," she said at a press conference Wednesday. "And I think every time I hear of conversations around war I find myself being stricken with PTSD."

For that, the right pounced. Republican Rep. Jim Banks of Indiana tweeted Wednesday, “Rep. Ilhan Omar complained she’s ‘stricken with PTSD’ because of recent events in the Middle East. This is a disgrace and offensive to our nation’s veterans who really do have PTSD after putting their life on the line to keep America safe.” The congressman obviously doesn’t know you don’t have to have fought in a war to experience post-traumatic stress disorder. The American Psychiatric Association defines PTSD as “a psychiatric disorder that can occur in people who have experienced or witnessed a traumatic event such as a natural disaster, a serious accident, a terrorist act, war/combat, rape or other violent personal assault.”

More than 20 years ago, Omar fled war in Somalia and stayed at a Kenyan refugee camp before later immigrating to America, according to The Washington Post. The newspaper covered her speech to students at a Minnesota high school in July of 2019. “I grew up in an extremely unjust society,” she said, “and the only thing that made my family excited about coming to the United States was that the United States was supposed to be the country that guaranteed justice to all.”

Translation for those of us who need one: Fleeing war can have a tendency to be traumatic. And although Banks’ ignorant response attracted acclaim from Trump supporters, some of us who actually have dictionaries and can look up what post-traumatic stress disorder is called the legislator out for his insensitivity. Democratic Rep. Ruben Gallego of Arizona tweeted Thursday, “On the house floor we have heard our white female colleagues talk about their PTSD from domestic violence. It’s odd that you never called them out.” Twitter user @LizardRumsfeld tweeted: “She spent 4 years in a refugee camp when trying to escape war in Somalia you absolute f--king moron.” And Brian Tyler Cohen, managing editor of the political organization Occupy Democrats, added: "Shorter: Only white people are entitled to have PTSD."

However, having long been the target of "Send her back" chants and other episodes of racism from both the president and his supporters, Omar doesn’t need anyone to speak for her. She’s perfectly suited to put the president in his place all on her own. “When the United States enters conflicts with Muslim-majority countries, it destabilizes nations and infringes upon human rights. It also riles up Islamophobes and racists at home,” she tweeted in one post. “I’ve seen it right here on Twitter, where my calls to avoid a war with Iran were met with anti-Muslim slurs and tropes in my replies. We’ve seen it at the U.S.-Canadian border, where dozens of Iranians and Iranian-Americans have been held for questioning for no reason at all,” she added in another.

“Muslims shouldn’t have to live in fear of death threats and violent hate crimes,” Omar said. “The times we’re in call for all of us to work harder to stamp out hate. We must put Islamophobia in the dustbin of history where it belongs.”

On the house floor we have heard our white female colleagues talk about their PTSD from domestic violence. It’s odd… https://t.co/n5SwH2lgKk
— Ruben Gallego (@Ruben Gallego) 1578579543

Hi Jim, I survived war as a child and deal with post-traumatic stress disorder—much like many who have served or l… https://t.co/aDMjXEKMN3
— Ilhan Omar (@Ilhan Omar) 1578526562