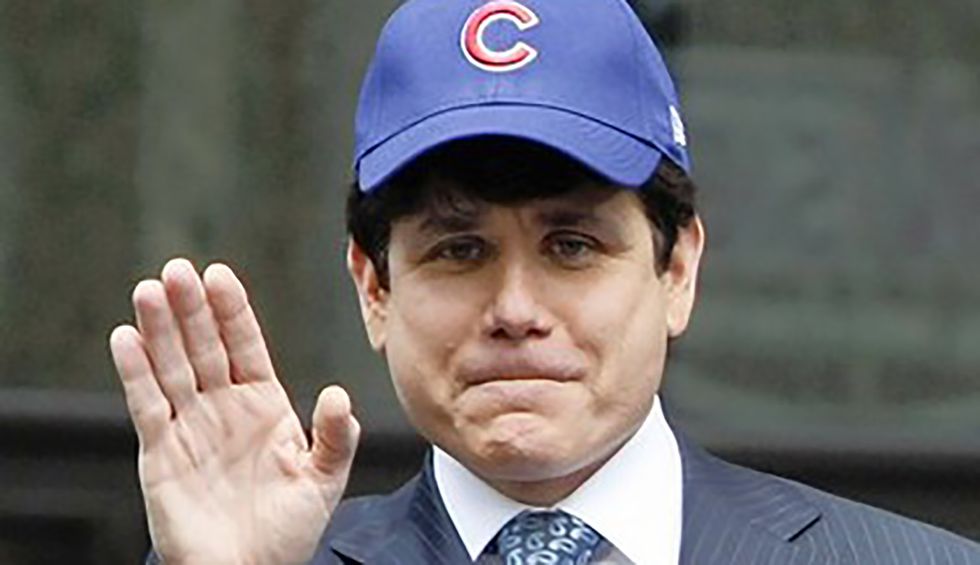 Although former Illinois Gov. Rod Blagojevich is a Democrat, he has been a vigorous defender of President Donald Trump — first with the Russia investigation and the Mueller report, now with the Ukraine scandal and Trump’s impeachment. Blagojevich, who is serving a 14-year sentence in federal prison on corruption charges, expressed his pro-Trump outlook in an op-ed that was published by the right-wing Newsmax website on New Year’s Day. And Twitter has erupted with assertions that the op-ed is a thinly veiled effort to get a presidential pardon from Trump.

Blagojevich’s op-ed is so over-the-top in its defense of Trump that it reads like something that would have been written by Rep. Devin Nunes or Rep. Jim Jordan — not a Democrat. The former Illinois governor compares Trump to the United States’ first Republican president: Abraham Lincoln, arguing that House Speaker Nancy Pelosi would have impeached Lincoln had she been alive in the 19th Century.

Blagojevich asserts, “Recently, I’ve wondered what would have happened had Nancy Pelosi been the speaker of the House when Abraham Lincoln was president. Would Speaker Pelosi's House Democrats use the same flimsy impeachment standard they are currently using to impeach Honest Abe, one of the greatest presidents in the history of our country?”

Blagojevich goes on to say, “Today’s Democrats would have impeached Lincoln for obstruction of Congress and abuse of power when he unilaterally issued his Emancipation Proclamation.”

Blagojevich has first-hand experience with impeachment: he was convicted and removed from office by the Illinois Senate — and after that, he was indicted by a federal grand jury on multiple corruption charges. The former Illinois governor was convicted of 17 charges in 2011 and sentenced to 14 years in federal prison for, among other things, trying to sell the U.S. Senate seat once held by President Barack Obama.

Trump has indicated that he is open to the possibility of commuting Blagojevich’s sentence, but without granting him a full presidential pardon — which, according to the Washington Post’s Aaron Blake, is exactly what Blagojevich is hoping for. Blake tweeted that the headline of Blagojevich’s op-ed “might as well have been: ‘Please pardon me, President Trump.’” And he isn’t the only one lambasting him on Twitter.

Chris Lu, former deputy secretary of labor for the Obama Administration, tweeted, “As governor, Blagojevich was impeached and convicted for abusing his office for personal political gain. So leaving aside the obvious attempt to win a pardon, this maybe isn’t the best person to defend Trump.”

As governor, Blagojevich was impeached and convicted for abusing his office for personal political gain. So leaving… https://t.co/Vyb2gJlJzk
— Chris Lu (@Chris Lu) 1577931773.0

@4thcornergal tweeted, “I hope Trump does pardon him. It will make for great ads this fall.” And @jsweeneys wrote, “I live across the river from Illinois. I remember when this happened. Now, KNOW that Illinois is used to a little grift. They aren’t prudes about it. But I have NEVER seen the body politic so united in anger as they were at him. Everyone wanted him punished, even more than he was.”

@Woodyman502 posted, “Blogo is a Trump clown,” while @ronh_pm wrote, “Did this man really just write close to 1000 words comparing Trump to Lincoln?”

@CitizenWonk was critical of Newsmax for even publishing the op-ed, tweeting, “Blagovich tried to sell a Senate Seat so I have to wonder about the ethics and wisdom of a publication that would publish an article on impeachment by such a person.” And @LynneGarrison lamented, “How low have we fallen that convicted felons can write an OP-Ed, or go on Fox News to plead their case to an audience of one to try to secure a pardon?”