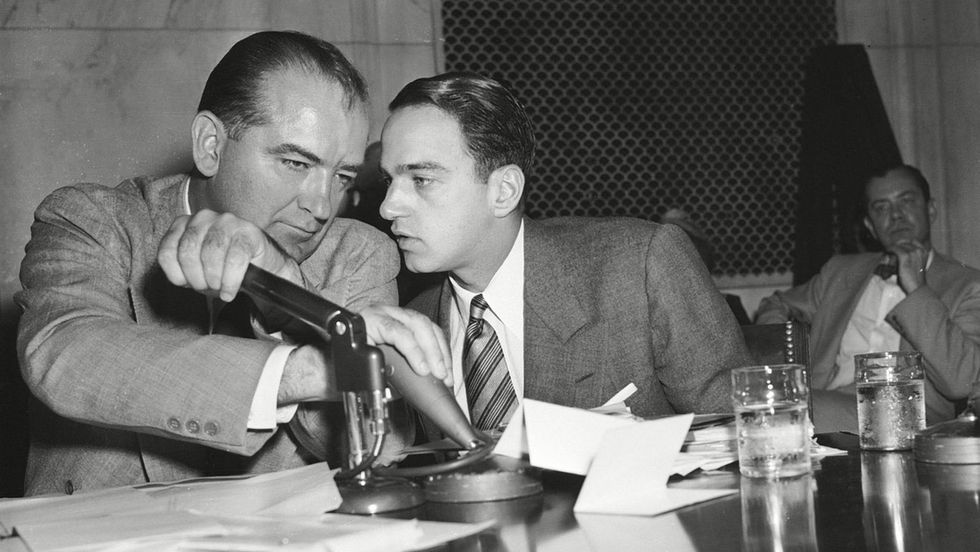 Supporters of President Donald Trump have promoted a variety of right-wing conspiracy theories, from the Crowdstrike theory (which claims that Ukraine, not Russia, interfered in the 2016 presidential election) to the racist “birther” nonsense (which claimed that President Barack Obama was really born in Kenya, not the United States). But author Matthew Dallek, in a January 2 article for the Washington Post, stresses that Republicans were promoting outlandish conspiracy theories long before Trump decided to run for president in 2015.

“The intellectual life of the American right since Sen. Joe McCarthy’s rise to prominence in 1950 can be seen partially as a series of flirtations with conspiracists and a dedicated reluctance to read fringe crackpots out of its ranks,” Dallek explains.

Back in the 1950s, Dallek recalls, two of the leading right-wing conspiracy theorists were Sen. McCarthy of Wisconsin and Robert Welch, founder of the John Birch Society. There was very bad blood between Welch and journalist William F. Buckley, founder of the conservative National Review: Buckley had no use for Welch’s ridiculous claim that President Dwight D. Eisenhower, a Republican, was a “dedicated, conscious agent of the communist conspiracy.” But Dallek emphasizes that while Birchers were not welcome at the National Review, they found their niche in the Republican Party.

Dallek explains, “Yes, William F. Buckley Jr.’s National Review attacked John Birch Society founder Robert Welch…. But conservative leaders more typically embraced the passion and support of the Birchers at the grass roots. At its 1964 national convention, the GOP rejected a plank condemning the Society, along with its conspiratorial beliefs. Birchers such as John Rousselot and John Schmitz served in Congress as Republicans in good standing, while conservative oilman and family patriarch Fred Koch was a founding member of the Society.”

Had Gen-X radio host and conspiracy theorist Alex Jones been alive in the 1950s and 1960s, he would have loved some of the theories that the John Birch Society promoted. For example, Dallek notes, Birchers believed that “fluoride in drinking water was part of a communist plot to cause cancer or control Americans’ minds.” Another Bircher conspiracy theory (which Dallek doesn’t mention in his article) was that the bad blood between the Soviet Union and the Maoist government in Communist China was a fabrication — and that the two hoped to join forces and invade the United States.

In the 1990s, Bill Clinton was the most conservative Democratic president in generations. Regardless, many Republicans absolutely hated him. And Dallek points out that Clinton-related conspiracy theories came from everyone from billionaire Richard Mellon Scaife to the late Rev. Jerry Falwell, Sr. (founder of the far-right Morality Majority). Scaife, who later became active in the Tea Party, claimed that Clinton was part of a drug smuggling ring.

“During the Clinton years,” Dallek explains, “the crackpot theorizing became harder and harder to distinguish from the Republican Party itself.”

Dallek wraps up his article by emphasizing that Trump is merely a symptom of the Republican Party’s willingness to embrace far-out conspiracy theories, not the cause.

“Ultimately, Trump was the logical consequence of a posture followed for decades at the top echelons of the conservative movement: the batty screeds are silly, but since they help us, we won’t work zealously to purge them,” Dallek observes. “Trump’s conspiracy-based capture of the GOP has less to do with him and his perspective than with a party that sought and often won the support of people who believe those notions.”