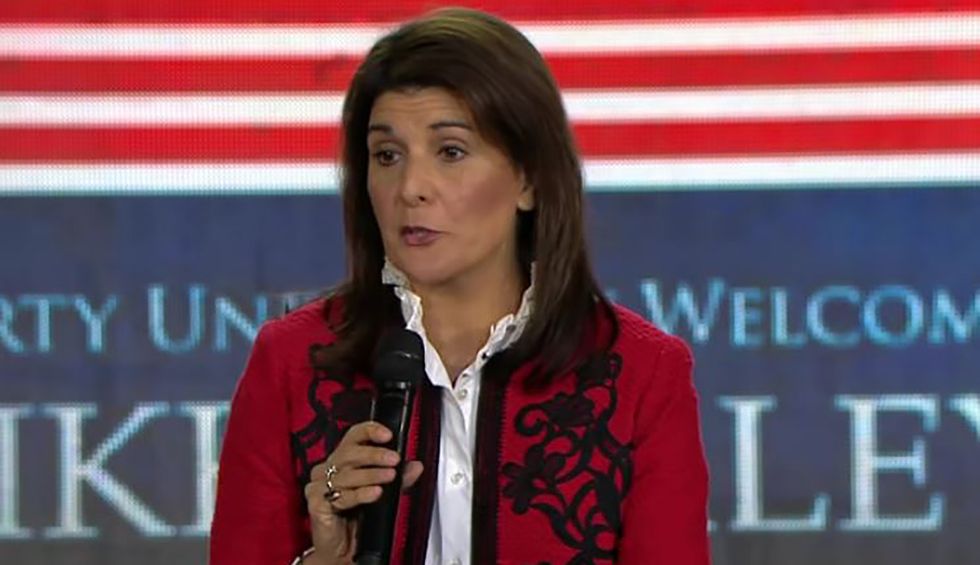 Former UN Ambassador Nikki Haley is under fire for attacking Democrats with lies in an attempt to defend President Donald Trump – a strategy some say she is employing to get Trump to see her as a replacement for Vice President Mike Pence on the 2020 ticket.

Monday night Haley went on Fox News to deliver what some journalists are calling “categorically false” and “ridiculous, inflammatory and dangerous” remarks.

Haley told Fox News viewers – which includes President Trump – that the “only ones mourning the loss of Soleimani are our Democrat leadership and Democrat Presidential candidates.”

And she even posted the clip of her remarks herself:

“The only ones mourning the loss of Soleimani are our Democrat leadership and Democrat Presidential candidates.” https://t.co/IZJJqpxkBE
— Nikki Haley (@Nikki Haley)1578364868.0

That is false – no one in Democratic leadership and no Democrat Presidential candidate is “mourning the loss of Soleimani.” What Democrats are disturbed by is the questionable legality of an assassination of a foreign government official, and the process by which Trump made the decision to order the killing of Soleimani – without calculating the consequences, which are now disastrously unfolding.

Many are responding, angry about Haley lying, and noting she has ruined her reputation as a moderate Republican who might have had a chance in 2024.

we're used to nikki haley saying whatever needs to be said to stay relevant, but this is an absolutely face-melting… https://t.co/HgnkZl1ra8
— Bobby Lewis (@Bobby Lewis)1578398083.0

Lacking any rationale for timing & location of assassination (which as been obviously terrible for US), Trump sycop… https://t.co/enu06wnDEw
— David Rothschild (@David Rothschild)1578367942.0

@NikkiHaley Later, when Haley pretends not to have been part of the shameless lying of the Trump era, remember that she was.
— Will Saletan (@Will Saletan)1578370340.0

I’m impressed that Haley managed to leave the administration with her reputation mostly-intact and has since done h… https://t.co/JkjjwXNb5u
— Angry Staffer (@Angry Staffer)1578371106.0