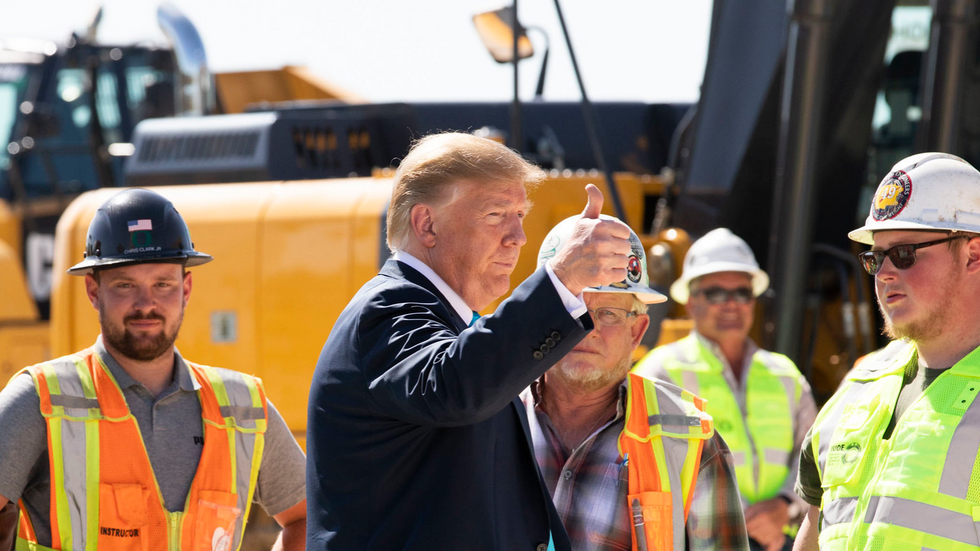 Trump has repeatedly said, for instance, that the costs of his tariffs — which are just taxes on U.S. imports — are paid entirely by foreign governments and firms, rather than by Americans. But a paper by researchers Mary Amiti of the Federal Reserve Bank of New York, Stephen J. Redding of Princeton University, and David Weinstein of Columbia University directly rebuts that claim.

The authors noted that initial research had pointed to the fact that Americans were bearing the burden of the tariffs in 2018, when Trump's aggressive trade tactics were initially enacted. But it wasn't clear, they said, whether this would continue as the tariffs persisted.

And yet, they found that "data for most of 2019 does not alter the main conclusions of earlier studies. U.S. tariffs continue to be almost entirely borne by U.S. firms and consumers."

Similarly, we also finnd that the substantial redirection of trade in response to the 2018 tariffs has accelerated. Among goods that continue to be imported, a 10 percent tariff is associated with about a 10 percent drop in imports for the first three months, but this elasticity doubles in magnitude in subsequent months. These higher long-run elasticities suggest that the 2018 tariffs—many of which were applied in October—are only now having their full impact on U.S. import volumes.

What this means is that the longer the tariffs have remained in place, the more firms that rely on the imports shift away to buying other products. It also indicates that foreign firms aren't dropping their prices to accommodate the tariffs, which would have meant foreigners rather than Americans are swallowing the costs of the policy, as Trump likes to claim.

There are some exceptions to this general finding, though, because the researchers noted that different sectors reacted differently to tariffs.

"The data show that U.S. tariffs have caused foreign exporters of steel to substantially lower their prices into the U.S. market," they wrote. "Thus, foreign countries are bearing close to half the cost of the steel tariffs. Since China is only the tenth largest steel supplier to the U.S. market, these costs have largely been borne by regions like the EU, South Korea and Japan."

But even in this case, where foreign firms are lowering prices because of steel tariffs, the authors added that this is actually "bad news for workers hoping that steel tariffs will bring back jobs." The paper went on: "Indeed, the fact that foreign steel producers have lowered their prices in response to U.S. tariffs may help explain why U.S. steel production only rose by 2 percent per year between the third quarter of 2017 and the third quarter of 2019 despite 25 percent steel tariffs."

And a separate paper, also from NBER, took a look at the impact of Trump's tariffs on exports and also found major costs. Kyle Handley of the University of Michigan, Fariha Kamal of the U.S. Bureau of the Census, and Ryan Monarch of the Federal Reserve Board of Governors examined used what they describe as "confidential U.S. firm-trade linked data" to analyze the effects of the tariffs on U.S. exporting companies. One of the stated goals of Trump's trade policy, after all, has been to increase U.S. exports and manufacturing.

The researchers found, however, that the tariffs appear to have "significantly dampened U.S. export growth."

Why would exporters be hurt by tariffs, which again, are just import taxes? Because the taxes fell on many "intermediate goods" — goods that are used to make other products, which can then be sold by Americans to foreign countries.

"[We] find that almost one fourth of U.S. exporters imported products subject to new import tariffs," they wrote. "Moreover, these firms account for more than 80% of U.S. exports by value. Affected firms were disproportionately larger than the average exporter in terms of total exports, employment, and number of plants."

They even estimated how much these affected companies per employee, finding that the tariffs cost "$900 per worker overall and about $1,600 in the manufacturing sector."

Overall, they report that the tariffs reduced export growth by about 2 percent. Had the tariffs not been targeted at such widely used intermediate goods, they found, the negative impact on export growth could have been slashed by 60 percent.

"Do not tax intermediate goods, or this is what happens," said economist Noah Smith on Twitter in response to the paper.