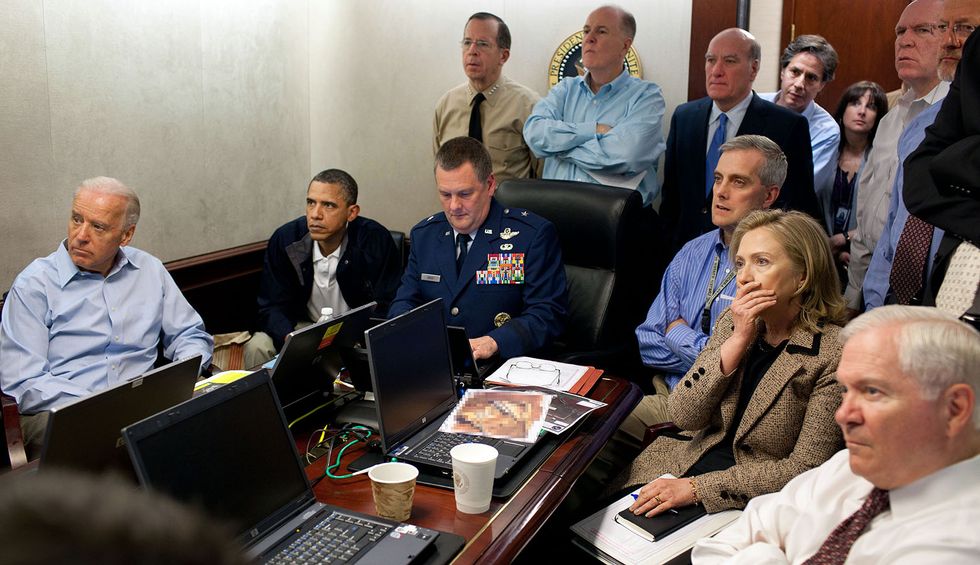 President Barack Obama and Vice President Joe Biden, along with with members of the national security team, receive an update on the mission against Osama bin Laden in the Situation Room of the White House, May 1, 2011. Please note: a classified document seen in this photograph has been obscured. (Official White House Photo by Pete Souza) This official White House photograph is being made available only for publication by news organizations and/or for personal use printing by the subject(s) of the photograph. The photograph may not be manipulated in any way and may not be used in commercial or political materials, advertisements, emails, products, promotions that in any way suggests approval or endorsement of the President, the First Family, or the White House.
Alex Henderson
January 13, 2020

Among supporters of President Donald Trump, one often hears the talking point that the killing of Iranian military commander Qasem Soleimani on January 3 is no different from the May 2, 2011 raid that resulted in the death of al-Qaeda leader Osama bin Laden. But journalist/author Mark Bowden, known for his books on the Middle East, emphasizes in a Boston Globe op-ed that the two are totally different.

“Both men were deadly enemies of the United States and likely targets. Both were responsible for attacks on Americans throughout the world. Both were killed in foreign lands without the approval of the local authorities: bin Laden in Pakistan and Soleimani in Iraq. But here the similarities end,” explains Bowden, whose books include 2012’s “The Finish: The Killing of Osama bin Laden” and 2007’s “Guests of the Ayatollah: The Iran Hostage Crisis, the First Battle in America's War with Militant Islam.”

With President Barack Obama having issued a shoot-to-kill-if-necessary order, U.S. Navy SEALs carried out the operation in which bin Laden was killed. Bin Laden, unlike Soleimani, was never a government official.

“Killing bin Laden made a powerful symbolic statement about America’s resolve and was a damaging blow to al-Qaeda, a small stateless terrorist group with which the United States was formally at war — duly authorized by Congress,” Bowden notes. “It was an act carefully deliberated over many months that would not conceivably trigger a broader conflict. In contrast, killing Soleimani was a direct attack on a hostile nation-state, but one with which we are not yet at war. It was initiated by what appears to have been a presidential impulse, without consultation with Congress or allies.”

Bowden observes that during the final years of his life, bin Laden had become increasingly “isolated.”

“In the years after 9/11, bin Laden was on the run,” Bowden explains. “He moved from one hiding place to the next, as one by one the top members of his organization were arrested or killed — and as al-Qaeda itself, in its original state, was violently dismantled. The group’s ‘sheik,’ as bin Laden was known, ended up living on the upper level of a house in Abbottabad, Pakistan, stepping outside only to take walks in the garden enclosed by the property’s surrounding walls. He had become an isolated figure, largely cut off from even his own followers.”

Although Obama encouraged a team of U.S. Navy SEALs to use deadly force with bin Laden if necessary, he chose not to use deadly force against Soleimani — which had also been President George W. Bush’s position. Obama and Bush reasoned that targeting Soleimani for assassination would only increase the instability in that part of the world.

“No matter how tempting, Soleimani had become a figure revered by the Iranian faithful, second only to the Supreme Leader Ayatollah Khamenei,” Bowden asserts. “Killing him would inflame the very anti-Americanism that established and undergirds the theocracy. It would be a gift to the mullahs.”