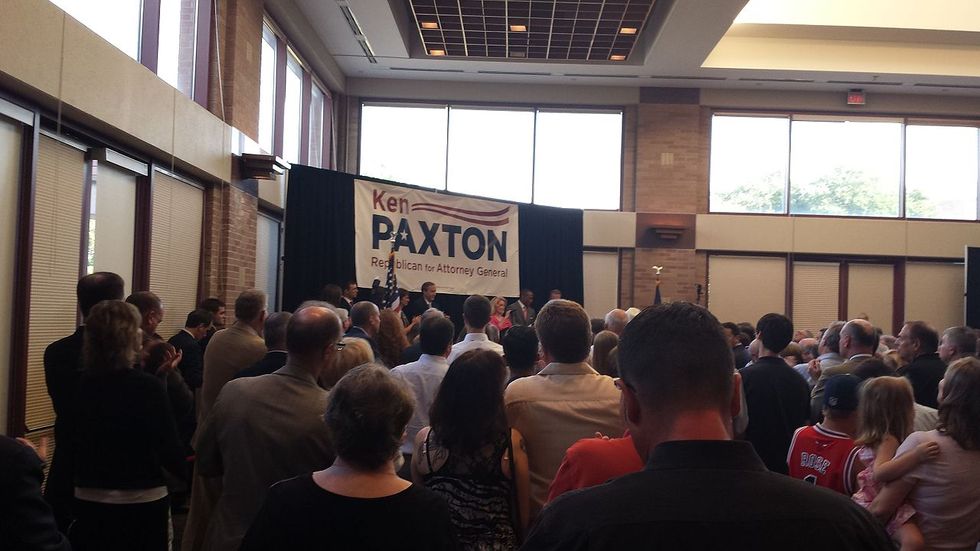 Texas Attorney General Ken Paxton is refusing to defend a state agency that’s being sued by a a bigoted justice of the peace who got pissed that she was disciplined for refusing to follow the law and marry same-sex couples. "We believe judges retain their right to religious liberty when they take the bench," said Paxton’s spokesperson, Marc Rylander.

It’s not just that Paxton is camouflaging his own homophobia and lawlessness in claims of “religious liberty”; it’s that this shameless motherfucker is also doing it while he faces three securities fraud charges.

This upcoming summer will mark five years since Paxton was indicted for allegedly violating state securities laws, and for nearly five years now he and his legal team have apparently pulled every trick in the book to delay his trial. Prosecutors said that those tricks have included an alleged “campaign to taint potential jurors by maligning the prosecution and the case against him,” the Austin American-Statesman reported.

Prosecutors moved to have the trial take place in Houston, but Paxton, who could face as long as 99 years in prison, argued “that his case was improperly transferred to Houston by a judge who no longer had the authority to issue such a ruling,” the Statesman continued. Someone facing as serious charges and prison time as Paxton probably shouldn’t even be in office while doing so, yet Paxton not only refuses to budge—he’s gonna stay to buck his own state’s commission to continue his anti-LGBTQ agenda.

The office he’s refusing to defend, the Commission on Judicial Misconduct, had warned justice of the peace Dianne Hensley for “her yearslong refusal to marry gay couples while continuing to marry heterosexual couples,” NBC News said, with PinkNews reporting that Hensley had allegedly called gay marriage “offensive.” She then sued the commission for $100,000, PinkNews continued, “claiming that her rights have been infringed upon.”

In what’s surely just a coincidence, CBS Austin reports that the firm defending Hensley, First Liberty Institute, is led by Kelly Shackelford, who has “endorsed Paxton and contributed to a legal defense fund Paxton has used to fight off a four-year-old criminal indictment for securities fraud.” Nothing to see here, folks. Nothing at all.