'If you are wondering who benefits': Weapons makers see stocks surge as Trump moves closer to war with Iran 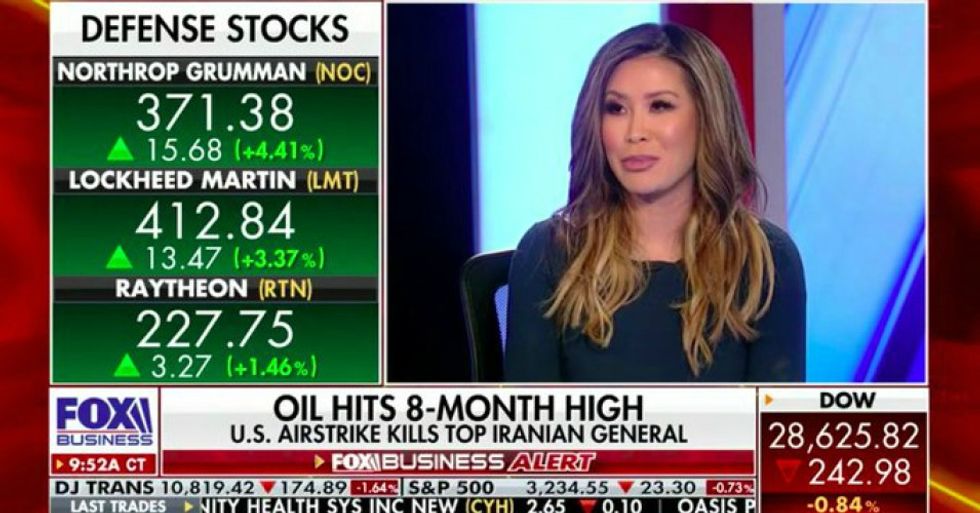 Almost immediately after the United States assassinated Iranian General Qassem Soleimani in a drone strike Thursday night, major American weapons manufacturers and defense contractors—from Northrop Grumman to Lockheed Martin to Raytheon—saw their stocks surge as investors sensed the growing likelihood of another costly and deadly war in the Middle East.

As the Los Angeles Times reported, "Even as the broader Standard and Poor's 500 index lost ground, the S&P Aerospace & Defense Select Industry index climbed 1.8% on Friday."

Northrop Grumman Corp. stock jumped 5.4%. Based in Falls Church, Va., Northrop Grumman makes such aircraft as the B-2 bomber and the upcoming B-21 bomber and is the sole bidder to build the next generation of intercontinental ballistic missiles.

The surge in defense stocks was readily highlighted on corporate television programs like Fox Business and in publications like Investor's Business Daily, which noted that "Northrop Grumman (NOC) and Lockheed Martin (LMT) were big winners in Friday's stock market trading, along with Raytheon stock."

Citigroup analyst Jonathan Raviv wrote Friday that "if Middle East conflict were to ratchet up...we think it could be tougher for Democratic Party electoral candidates to argue against a stronger defense budget in 2020."

"As is always the unfortunate case, defense stocks tend to benefit from perceptions of heightened risk and the potential for geopolitical conflict," Raviv added.

Rep. Ro Khanna (D-Calif.), who along with Sen. Bernie Sanders (I-Vt.) unveiled legislation to stop Pentagon funding for U.S. military action against Iran, tweeted late Friday that "if you are wondering who benefits from endless wars, take a look at how stocks for weapons manufacturers began to rise as soon as Soleimani was killed."