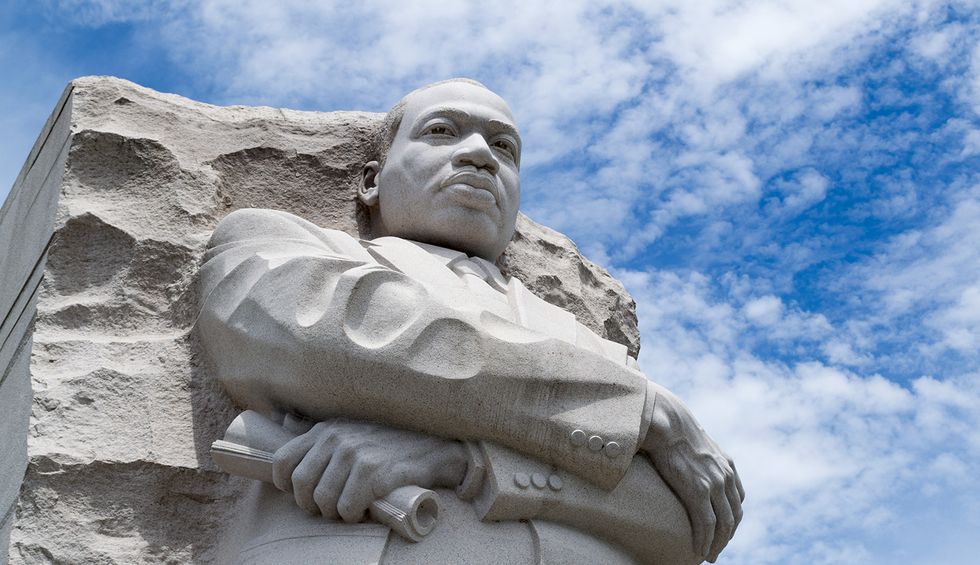 If Dr. Martin Luther King Jr. were still alive, he would be 91 — and it’s safe to say that the civil rights leader, who was 39 when he was assassinated in Memphis on April 4, 1968, would be troubled by many of the things that have been happening in the Trump era. King not only fought for black liberation, he also addressed everything from universal health care to the labor movement. And the Trump era is one in which health care is under attack, many of the economic gains have been concentrated at the top, and racists are more openly expressing their racism.

Here are some ways in which the Trump era embodies many of the things that King fought against.

Race relations wasn’t the only issue that King was concerned about, but it was at the top of his list — and certainly, he would be troubled by the results of a recent Washington Post/Ipsos poll on black voters. The poll, conducted earlier this month, found that eight out of 10 blacks in the United States believe Trump is a racist. And 65% of respondents believe that it is a “bad time” to be black in the U.S. — where, according to some of them, racists feel empowered and have been coming out of the closet. Kenneth Davis, a 48-year-old truck driver who is African-American and lives in the Detroit suburbs, told the Post that one of his co-workers is now “waving the Confederate flag on the back of his pickup truck.” Another respondent told the Post that Trump “has taken hatred against people of color in general from the closet to the front porch.”

In an op-ed published by The Root on Martin Luther King Day 2020, union leader Lee Saunders (president of the American Federation of State, County and Municipal Employees) stressed that King was an aggressive champion of the labor movement. King was passionately pro-union, and he would no doubt be dismayed to see how much the labor movement has declined in the United States. In 1954, almost 35% of U.S. workers were unionized, according to Pew Research Center; in 2018, only 10.3% of American workers belonged to unions. That’s taking into account both the public sector and the private sector; among private-sector workers, unionization was a mere 6.4% in the U.S. in 2018.

3. Religious extremists are championed by the president

Although King was a Protestant minister, he was happy to work with Jews, Muslims, Hindus and members of other faiths. But Trump, who comes from a Mainline Protestant background (he was raised Presbyterian) and was never especially religious, has allied himself with the Christian Right and the lunatic fringe of Christianity. Liberty University’s Jerry Falwell, Jr. is a major Trump ally and the son of the late Moral Majority founder Jerry Falwell, Sr. — who was a passionate defender of segregationist Jim Crow laws in the Deep South during the 1950s and 1960s. Falwell, Sr. claimed that King had communist sympathies — even though King was very outspoken against communism — and he believed that the U.S. Supreme Court’s ruling in Brown v. the Board of Education was against God’s will.

Sadly, the Christian Right is no less extreme in 2020 than it was in the past. And that is the extremist fringe of Christianity to which Trump happily panders.

King recognized the importance of a strong middle class, and the American middle class was hit hard by the Great Recession. Trump is quick to brag about the state of the U.S. economy and the decrease in unemployment since the Great Recession ended: according to the Bureau of Labor Statistics (BLS), unemployment was at 3.5% in December 2019. But it’s important to read the fine print: wages, as economists Robert Reich and Paul Krugman have often pointed out, have been stagnant. And as Efraim Benmelech, Nittai Bergman and Hyunseob Kim of the National Bureau of Economic Research have explained, a big problem is what economists call labor-market concentration — that is, not enough employers competing for workers locally.

King once asserted, “Of all the forms of inequality, injustice in health is the most shocking and inhuman.” Yet the U.S. remains the only major developed country that doesn’t have universal health care — and millions of Americans still lack health insurance. The Affordable Care Act of 2010, a.k.a. Obamacare, reduced the number of Americans who lack health insurance, but Trump and his supporters have tried to roll back the modest protections of the ACA — including protections for preexisting health conditions. And as Krugman asserted in his New York Times column, Trump and other Republicans are still determined to take health care away from millions of Americans.