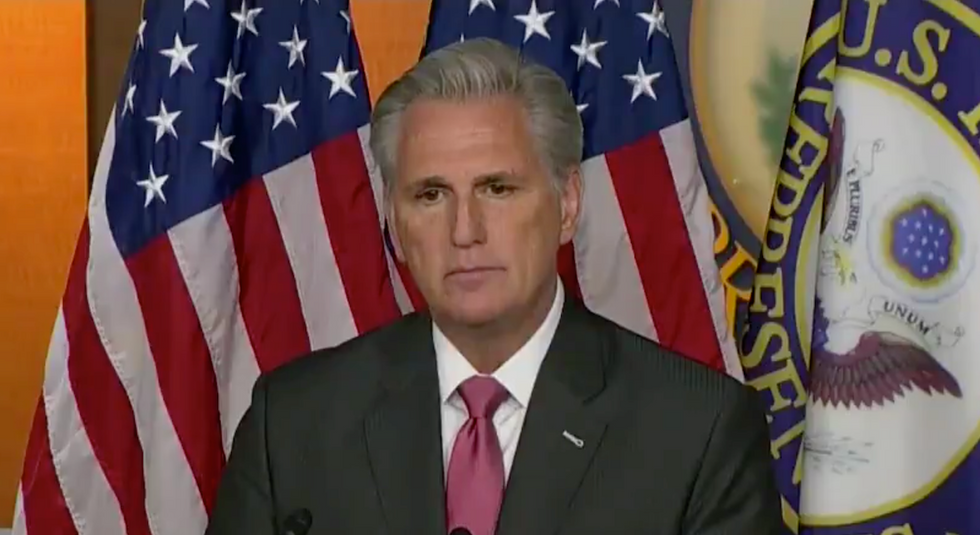 House Minority Leader Kevin McCarthy (R-CA) used this smear on Thursday during a press conference, and then he took his defense of Trump's actions to an even disturbing level. He directly called out House Speaker Nancy Pelosi's comments about the president's killing of Iranian military leader Qassim Suleimani, which was widely viewed as an extremely provocative action.

“We have no illusions about Iran, no illusions about Soleimani, who was a terrible person," Pelosi said. "But it's not about how bad they are, it's about how good we are, protecting the people in a way that prevents war and will not have us producing again and again generations of veterans who are suffering.”

In defending Trump's decision — which had a highly dubious legal and factual justification — McCarthy hit back at Pelosi.

The problem with this reasoning is that it makes the case that there are no limitations on Trump's authority to kill people he determines to be "bad." It doesn't invoke any legal or constitutional justifications for the strike, just the idea that Suleimani was "bad." And of course, it doesn't allow for any explanation of why other "bad" people around the world — Russian President Vladimir Putin, Chinese President Xi Jinping, North Korean leader Kim Jong-un — aren't the proper targets of assassination.

Of course, McCarthy doesn't really believe what he's saying — that a person being bad is all that is needed to justify targeted assassination. But the priority of the GOP is now, at all times, to defend the president, and apparently he can't come up with any better defenses. Which on its own is a pretty damning indictment of Trump's conduct.