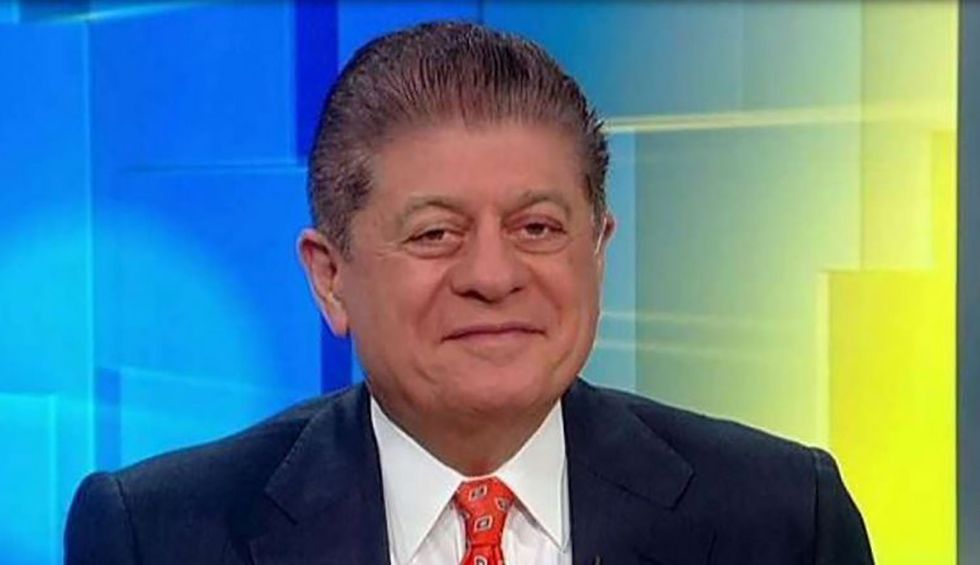 Judge Andrew Napolitano has been one of the political wild cards at Fox News: like his colleague Chris Wallace — but unlike so many others at the right-wing cable news outlet — Napolitano doesn’t see it as his job to reflexively defend everything President Donald Trump says and does. And Napolitano, in an op-ed published on Fox News’ website this week, takes issue with Trump’s assertions that his impeachment trial in the U.S. Senate is a “hoax.”

“His trial is not a charade or a joke or a hoax,” the libertarian judge emphasizes. “It is deadly serious business based on well-established constitutional norms.”

Trump, Napolitano notes, was indicted by the U.S. House of Representatives on two articles of impeachment: one for abuse of power, the other for obstruction of Congress.

“The abuse consists of his efforts to extract a personal political ‘favor’ from the president of Ukraine as a pre-condition to the delivery of $391 million in military aid,” Napolitano notes. “The favor he wanted was an announcement of a Ukrainian investigation of former Vice President Joseph R. Biden and his son, Hunter.”

Napolitano poses a question: “did Trump act criminally?” But he goes on to explain that in the U.S. Constitution, the phrase “high crimes and misdemeanors” as used by the Founder Fathers isn’t actually a reference to criminal law.

“The Constitution prescribes the bases for impeachment as treason, bribery or other high crimes and misdemeanors,” Napolitano points out. “However, this use of the word ‘crimes’ does not refer to violations of federal criminal statutes. It refers to behavior that is so destructive of the constitutional order that it is the moral equivalent of statutory crimes.”

Napolitano elaborates on his point, writing, “If the president moved to Russia and ran the executive branch from there, or if he announced that Roman Catholics were unfit for office, he would not have committed any crimes. Yet surely, these acts would be impeachable because, when done by the president, they are the moral equivalent of crimes and are so far removed from constitutional norms as to be impeachable.”

The judge concludes his op-ed by with an assertion that is seldom expressed at Fox News: there is plenty of “evidence” that Trump committed “high crimes and misdemeanors” as described in the U.S. Constitution.

“What is required for removal of the president?” Napolitano writes. “A demonstration of presidential commission of high crimes and misdemeanors, of which in Trump’s case, the evidence is ample and uncontradicted.”