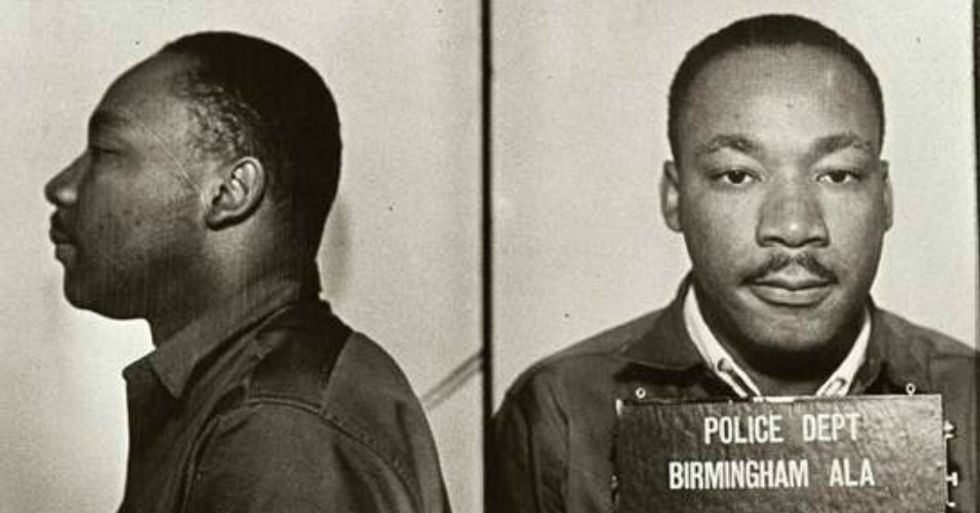 After the FBI took to Twitter Monday with a message that allegedly aimed to honor "the life and work" of Martin Luther King Jr., a chorus of critics promptly urged the bureau to "sit this one out," pointing to its history of spying on King and trying to convince the civil rights leader to kill himself.

Each year on the national holiday dedicated King, progressives criticize and work to counter the whitewashed public narrative of a man who, particularly in the years leading up to his April 1968 assassination, passionately condemned the "evils" of capitalism, militarism, and racism.

The FBI, during both the Obama and Trump administrations, has provoked a wave of criticism for posting shoutouts to King on social media, given the bureau's past treatment of him. Monday was no different.

Writer and radio host Richard "RJ" Eskow—who detailed King's radical vision and activism in a piece for the People's Action blog Monday—shared the FBI's 2020 tweet dedicated to MLK along with his own interpretation.

"FBI, translated: Of all the people we have wiretapped, blackmailed, and tried to drive to their deaths through suicide, there are none we think more highly of than Dr. King," Eskow tweeted.

FBI, translated: Of all the people we have wiretapped, blackmailed, and tried to drive to their deaths through suic… https://t.co/pubImK8PyV
— Richard (RJ) Eskow (@Richard (RJ) Eskow) 1579538314.0

Some critics expressed anger and disbelief. Rewire.News senior legal analyst Imani Gandy wrote in response to the FBI, "You've got to be fucking kidding me."

Journalist David Corn posed "a sincere question," asking: "Has the FBI ever apologized to King's family for wiretapping King, blackmailing him, and trying to get him to commit suicide?"

Others posted an unsigned letter from 1964 that the FBI, then under the direction of J. Edgar Hoover, sent to King in an attempt to use evidence of his extramarital affairs to compel him to kill himself.

@FBI Read the letter the FBI sent MLK to try to convince him to kill himself https://t.co/YxFxHaExEZ
— Alexis Goldstein (@Alexis Goldstein) 1579537272.0

The unredacted letter was published by Yale University American history professor Beverly Gage in the New York Times in 2014.

According to Enemies, journalist Tim Weiner's history of the FBI, [the bureau's domestic intelligence chief William Sullivan] "had a package of the King sex tapes prepared by the FBI's lab technicians," and sent it along with this letter to King's home. The package was opened by King's wife.

Acknowledging the bureau's track record of posting about MLK, Patterson added, "Do y'all think there's anyone over at FBI marketing who at least *tries* to get them not to do this annually?"

The official ACLU account warned that "if we let the government whitewash history, we risk letting abuses repeat themselves."

The civil liberties group linked to a piece that Kade Crockford, director of the Technology for Liberty program at the ACLU of Massachusetts, published in Rolling Stone on MLK Day last year—detailing "Hoover's obsession with King," which Crockford concluded "bordered on the fanatical," and the consequences of that obsession, including the letter.

Crawford also noted that "the FBI's surveillance of black Americans isn't just history. [In 2018], we learned the FBI has been spying on black activists, labeling them 'Black Identity Extremists.' The feds also use powers obtained through national security laws like the Patriot Act to target people in the racially biased drug war."

"More disturbing: The FBI that spied on King and today classifies Black civil rights activists as 'extremists,'" Crockford continued, "is now partnering with Big Tech to amass unprecedented surveillance powers that history has taught us will be used to target communities of color, religious minorities, dissidents, and immigrants."

FBI Director Christopher Wray testified before Congress in July 2019 that the bureau has stopped using the term "black identity extremism." However, some groups and individuals on Monday shared critiques of the FBI's current practices alongside denunciations of the bureau's past behavior.

The London-based advocacy group CAGE, which works to empower communities impacted by the War on Terror, tweeted Monday the FBI still tries "to suppress dissent" and uses "dirty tactics that would make Edgar Hoover proud. But [is] happy now to co-opt MLK to try to cover up the above."

CAGE also shared the FBI's letter to King and, like many other critics, referenced COINTELPRO, the domestic counterintelligence program under which the FBI spied on King and many other activists and organizations, including the Black Panthers and protesters of the Vietnam War.