Economist Joseph Stiglitz: Trump's economy is an absolute disaster for people and the planet 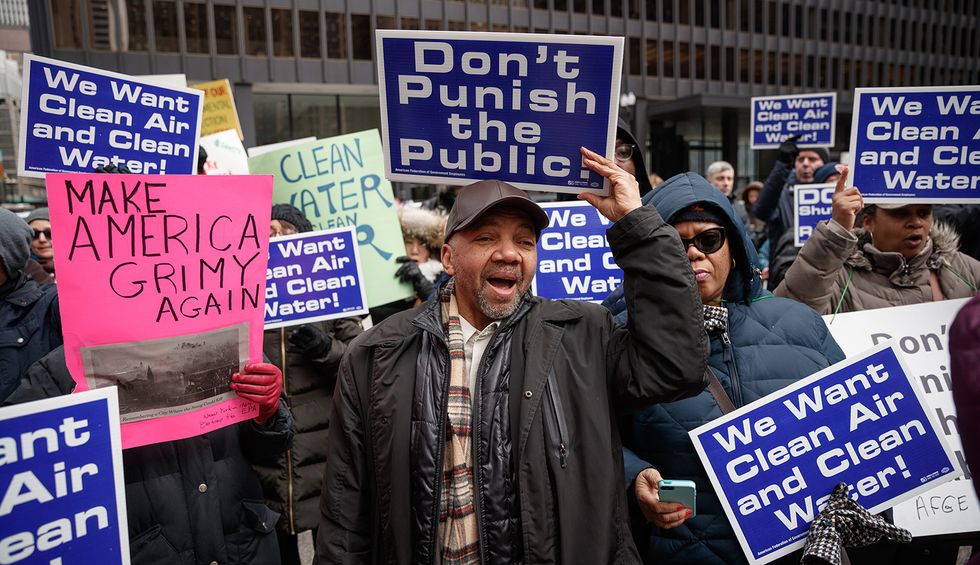 It is becoming conventional wisdom that US President Donald Trump will be tough to beat in November, because, whatever reservations about him voters may have, he has been good for the American economy. Nothing could be further from the truth.

Neither GDP nor the Dow is a good measure of economic performance. Neither tells us what’s happening to ordinary citizens’ living standards or anything about sustainability. (Photo: Johannes Eisle/AFP/Getty Images)

As the world’s business elites trek to Davos for their annual gathering, people should be asking a simple question: Have they overcome their infatuation with US President Donald Trump?

Two years ago, a few rare corporate leaders were concerned about climate change, or upset at Trump’s misogyny and bigotry. Most, however, were celebrating the president’s tax cuts for billionaires and corporations and looking forward to his efforts to deregulate the economy. That would allow businesses to pollute the air more, get more Americans hooked on opioids, entice more children to eat their diabetes-inducing foods, and engage in the sort of financial shenanigans that brought on the 2008 crisis.

Today, many corporate bosses are still talking about the continued GDP growth and record stock prices. But neither GDP nor the Dow is a good measure of economic performance. Neither tells us what’s happening to ordinary citizens’ living standards or anything about sustainability. In fact, US economic performance over the past four years is Exhibit A in the indictment against relying on these indicators.

The lion’s share of the increase in GDP is also going to those at the top.

To get a good reading on a country’s economic health, start by looking at the health of its citizens. If they are happy and prosperous, they will be healthy and live longer. Among developed countries, America sits at the bottom in this regard. US life expectancy, already relatively low, fell in each of the first two years of Trump’s presidency, and in 2017, midlife mortality reached its highest rate since World War II. This is not a surprise, because no president has worked harder to make sure that more Americans lack health insurance. Millions have lost their coverage, and the uninsured rate has risen, in just two years, from 10.9% to 13.7%.

One reason for declining life expectancy in America is what Anne Case and Nobel laureate economist Angus Deaton call deaths of despair, caused by alcohol, drug overdoses, and suicide. In 2017 (the most recent year for which good data are available), such deaths stood at almost four times their 1999 level.

The only time I have seen anything like these declines in health—outside of war or epidemics—was when I was chief economist of the World Bank and found out that mortality and morbidity data confirmed what our economic indicators suggested about the dismal state of the post-Soviet Russian economy.

Trump may be a good president for the top 1%—and especially for the top 0.1%—but he has not been good for everyone else. If fully implemented, the 2017 tax cut will result in tax increases for most households in the second, third, and fourth income quintiles.

Given tax cuts that disproportionately benefit the ultrarich and corporations, it should come as no surprise that there was no significant change in the median US household’s disposable incomebetween 2017 and 2018 (again, the most recent year with good data). The lion’s share of the increase in GDP is also going to those at the top. Real median weekly earnings are just 2.6% above their level when Trump took office. And these increases have not offset long periods of wage stagnation. For example, the median wage of a full-time male worker (and those with full-time jobs are the lucky ones) is still more than 3% below what it was 40 years ago. Nor has there been much progress on reducing racial disparities: in the third quarter of 2019, median weekly earnings for black men working full-time were less than three-quarters the level for white men.

Making matters worse, the growth that has occurred is not environmentally sustainable – and even less so thanks to the Trump administration’s gutting of regulations that have passed stringent cost-benefit analyses. The air will be less breathable, the water less drinkable, and the planet more subject to climate change. In fact, losses related to climate change have already reached new highs in the US, which has suffered more property damage than any other country – reaching some 1.5% of GDP in 2017.

The tax cuts were supposed to spur a new wave of investment. Instead, they triggered an all-time record binge of share buybacks – some $800 billion in 2018 – by some of America’s most profitable companies, and led to record peacetime deficits (almost $1 trillion in fiscal 2019) in a country supposedly near full employment. And even with weak investment, the US had to borrow massively abroad: the most recent data show foreign borrowing at nearly $500 billion a year, with an increase of more than 10% in America’s net indebtedness position in one year alone.

Likewise, Trump’s trade wars, for all their sound and fury, have not reduced the US trade deficit, which was one-quarter higher in 2018 than it was in 2016. The 2018 goods deficit was the largest on record. Even the deficit in trade with China was up almost a quarter from 2016. The US did get a new North American trade agreement, without the investment agreement provisions that the Business Roundtable wanted, without the provisions raising drug prices that the pharmaceutical companies wanted, and with better labor and environmental provisions. Trump, a self-proclaimed master deal maker, lost on almost every front in his negotiations with congressional Democrats, resulting in a slightly improved trade arrangement.

And despite Trump’s vaunted promises to bring manufacturing jobs back to the US, the increase in manufacturing employment is still lower than it was under his predecessor, Barack Obama, once the post-2008 recovery set in, and is still markedly below its pre-crisis level. Even the unemployment rate, at a 50-year low, masks economic fragility. The employment rate for working-age males and females, while rising, has increased less than during the Obama recovery, and is still significantly below that of other developed countries. The pace of job creation is also markedly slower than it was under Obama.

Again, the low employment rate is not a surprise, not least because unhealthy people can’t work. Moreover, those on disability benefits, in prison—the US incarceration rate has increased more than sixfold since 1970, with some two million people currently behind bars – or so discouraged that they are not actively seeking jobs are not counted as “unemployed.” But, of course, they are not employed. Nor is it a surprise that a country that doesn’t provide affordable childcare or guarantee family leave would have lower female employment—adjusted for population, more than ten percentage points lower—than other developed countries.

Even judging by GDP, the Trump economy falls short. Last quarter’s growth was just 2.1%, far less than the 4%, 5%, or even 6% Trump promised to deliver, and even less than the 2.4% average of Obama’s second term. That is a remarkably poor performance considering the stimulus provided by the $1 trillion deficit and ultra-low interest rates. This is not an accident, or just a matter of bad luck: Trump’s brand is uncertainty, volatility, and prevarication, whereas trust, stability, and confidence are essential for growth. So is equality, according to the International Monetary Fund.

So, Trump deserves failing grades not just on essential tasks like upholding democracy and preserving our planet. He should not get a pass on the economy, either.