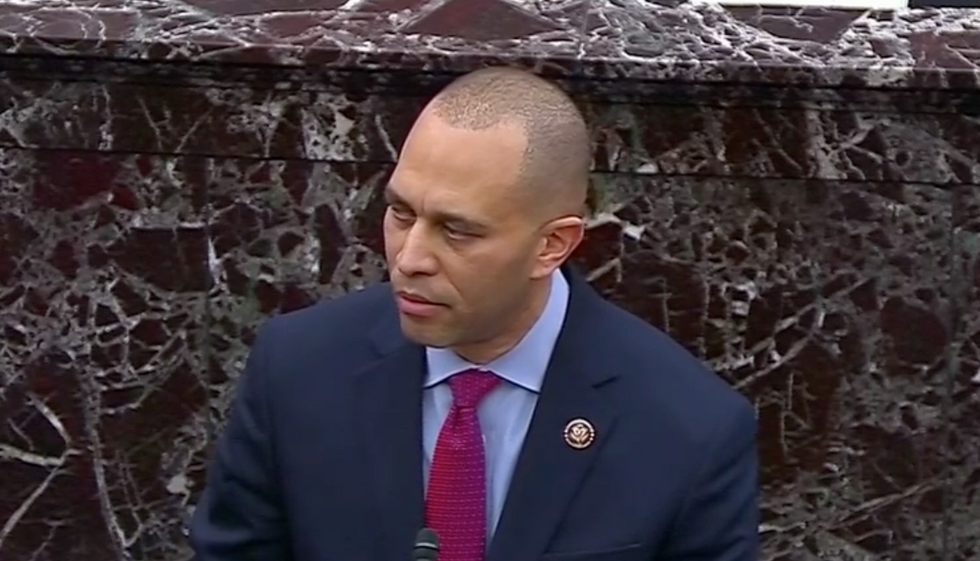 On the floor of the Senate, House impeachment managers have delivered a thorough, factual and compelling case for removing President Donald Trump from office. He abused his power by using his office to induce Ukrainian President Volodymyr Zelensky into launching investigations of his political enemies, and then he obstructed Congress in its efforts to uncover the details of this scheme.

The managers' ability to present the evidence for these charges for hours on end has been impressive, and they're earning plaudits for their furtive efforts, even though removal of the president remains supremely unlikely.

But one claim in the case they're consistently bringing up actually weakens their argument, and they would be wise to drop it entirely.

They argue that when Trump asked Zelensky for an investigation into former Vice President Joe Biden and his son Hunter, he didn't really want a real investigation. All Trump cared about, they say, is that Zelensky announce the investigation.

And yet it's not actually clear that this is true. And in fact, if this claim is false, I think their case against the president is stronger, not weaker.

Here's how Rep. Hakeem Jeffries (D-NY) made the point Thursday night, though others have pushed the same argument:

There are several problems with this argument. First, it puts too much weight on Sondland's testimony. While he was a direct participant in many of the key events, he's not the most reliable narrator, and it's not clear how accurate his claims are.

SONDLAND: I can’t characterize why he wanted them. All I can tell you is this is what we heard from Mr. Giuliani.

SCHIFF: But he had to get those two investigations if that official act was going to take place, correct?

SONDLAND: He had to announce the investigations. He didn’t actually have to do them, as I understood it.

Later, he had this exchange with committee counsel Daniel Goldman:

GOLDMAN: Giuliani and President Trump didn’t actually care if they did them, right?

SONDLAND: I never heard, Mr. Goldman, anyone say that the investigations had to start or be completed. The only thing I heard from Mr. Giuliani or otherwise was that they had to be announced. ... President Trump presumably, communicated through Mr. Giuliani, wanted the Ukrainians on-record publicly that they were going to do those investigations.

GOLDMAN: You never heard anyone say that they really wanted them to do the investigations.

SONDLAND: I didn’t hear either way.

Sondland ends by saying he "didn't hear either way" whether Trump and Giuliani wanted real investigations. So taking it as certain that they, in fact, didn't care about having a real investigation seems hasty.

And, after all, given Trump's priorities, why wouldn't he want a real investigation? A criminal investigation of anyone can turn up any kind of unforeseen activity that could be used to smear them. If Ukrainian prosecutors were struggling to get an interview with Biden, that would make for delightful fodder for Fox News coverage. Arguably, Hillary Clinton's 2016 campaign was done in by the last-minute revelation from then-FBI Director James Comey that the investigation into her emails had been re-opened — a development that only happened because the bureau conducted a real, if fruitless, investigation.

Some testimony even suggested that Trump really did want a real investigation. Ambassador Bill Taylor testified that Sondland told him Trump wanted Zelensky "in a public box" — that's why he wanted the announcement. But why did Trump want Zelensky publicly boxed in? Presumably, so there'd be pressure on him to actually do the investigation.

We shouldn't conclude, then, that Trump didn't want a real investigation. And making this claim if it's not true could be a big mistake.

Suppose White House Chief of Staff Mick Mulvaney or former National Security Adviser John Bolton end up testifying somehow, and they insist that Trump really did want an investigation. If Democrats have hung their hats on the idea that all that mattered was the investigation, otherwise damning testimony could serve to undercut their case.

More importantly, actually wanting the investigation is worse than just wanting the announcement.

Both, I believe, are bad and impeachable in this context. But one of the reasons we believe law enforcement investigations should be adequately predicated is that they can be extremely intrusive and disruptive to an individual's life. They also create new opportunities for criminal exposure — for example, lying to investigators — that wouldn't have occurred if the investigation never took place. That's why it's so important for civil rights that law enforcement investigations are only started for a good reason, rather than for political or retaliatory motives.

It's also bad for a government to create a false impression that someone is under criminal investigation. And in the context of a political campaign, it's doubly bad. But it's worse, on top of all that, to also be subjected to a thorough and invasive law enforcement investigation. So claiming that Trump didn't really care about having an actual investigation makes his push less egregious, even though it would still be deeply wrong.

However, there is still an important point Democrats can make about the desire for an announcement. It shows that, even if Trump wanted a real investigation, his motivations for the request were entirely corrupt. That's because investigators don't usually announce the start of an investigation under usual circumstances. It shows that what Trump really wanted out of the investigation — whether it was real or fake — was damage it could do to Biden's public image. If he wanted the most effective investigation possible, he should have been happy for it to be kept under wraps.

There's plenty of other evidence to support the conclusion that Trump's motives were corrupt: He only waited until the 2020 campaign had begun to make the request; Trump shows no demonstrated interest in stopping corruption, and, in fact, engages in it himself; the request wasn't brought to U.S. law enforcement or made to Ukraine through the proper channels; Trump had no interest in any anti-corruption investigations that wouldn't benefit him personally.

So it should be beyond a reasonable doubt that Trump's ask to Ukraine was plainly corrupt. But that's not because the investigation would have been phony. In the worst-case scenario, it would have been all too real.