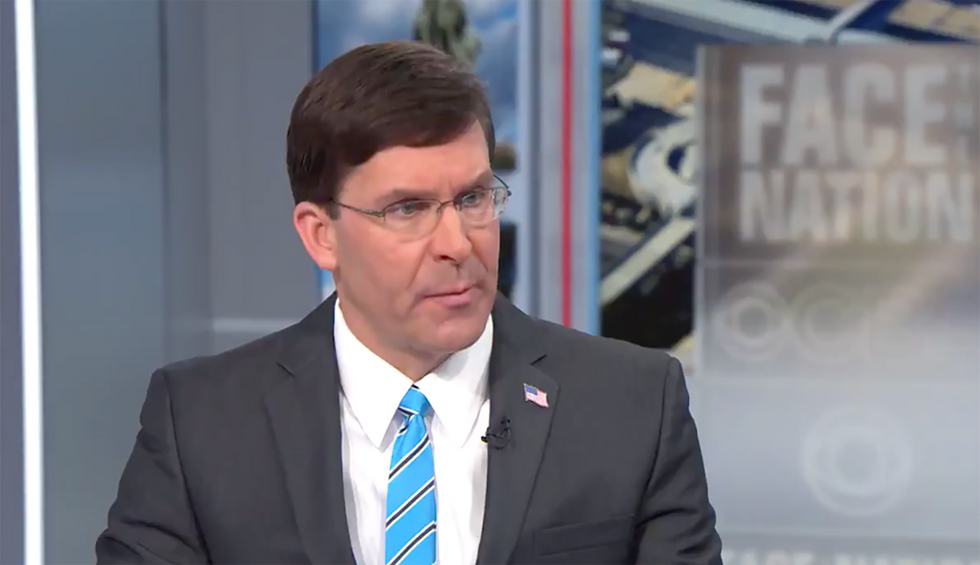 Defense Secretary Mark Esper made the morning show rounds on Sunday, ostensibly to provide cover for the Trump administration’s claim that Iranian General. Qassem Soleimani posed an “imminent threat” to United States personnel prior to his assassination. In doing so, however, Esper highlighted the administration’s evolving justifications for launching the strike that killed Soleimani, and contradicted President Donald Trump’s unsubstantiated claim the Iranian commander was planning an attack on “four embassies” in the region.

“What the president said was he believed it probably could have been,” Espert told Tapper. “He didn't cite intelligence."

In fact, in an interview with Fox News’ Laura Ingraham on Friday, Trump purported to be divulging intelligence to the contrary.

“I can reveal that I believe it probably would’ve been four embassies,” the president told Ingraham.

Asked about the president’s claim in a separate interview with CBS’ Margaret Brennan on Sunday, Esper admitted he “didn’t see” evidence showing a plan to attack 4 U.S. embassies.

The whiplash wasn’t lost on viewers, who took to Twitter to express disbelief over Esper’s performance — and questioned why anyone would believe the defense secretary in light of the Trump administration’s shifting cover for the attack.

Legit surprised me that Sec. Esper led right off in the @CNNSotu interview by highlighting and underscoring the pre… https://t.co/E4QIKdHZJc
— David Swerdlick (@David Swerdlick) 1578839974.0

On CNN, Mark Esper makes it absolutely clear that the Trump administration is making it up as they go when they cla… https://t.co/2t6aQZFSh4
— Aaron Rupar (@Aaron Rupar) 1578838862.0

Esper admits that there is no evidence to back up Trump’s claims of imminent attack. He falls back on “belief.” Jus… https://t.co/7vMZbSbvn2
— Joe Cirincione (@Joe Cirincione) 1578841230.0