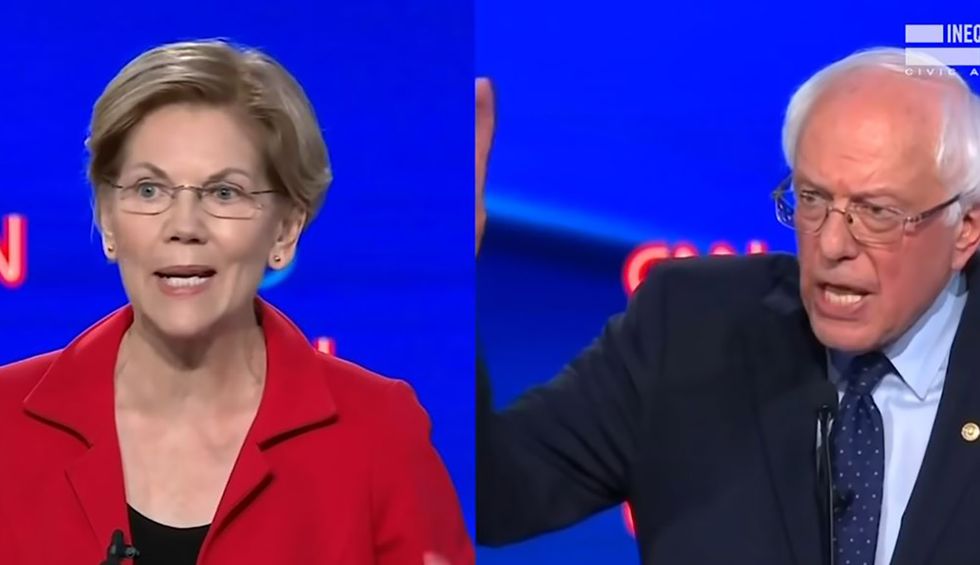 Corporate Democrats got a jolt at the end of last week when the highly regarded Iowa Poll showed Bernie Sanders surging into first place among Iowans likely to vote in the state’s Feb. 3 caucuses. The other big change was a steep drop for the previous Iowa frontrunner, Pete Buttigieg, who—along with Elizabeth Warren and Joe Biden—came in a few percent behind Sanders. The latest poll was bad news for corporate interests, but their prospects brightened a bit over the weekend when Politicoreported: “The nonaggression pact between Bernie Sanders and Elizabeth Warren is seriously fraying.”

The reason for that conclusion? While speaking with voters, some Sanders volunteers were using a script saying that Warren supporters “are highly educated, more affluent people who are going to show up and vote Democratic no matter what” and that “she’s bringing no new bases into the Democratic Party.”

At last, mainstream journalists could begin to report the kind of conflict that many had long been yearning for. As Politico mentioned in the same article, Sanders and Warren “have largely abstained from attacking one another despite regular prodding from reporters.”

That “regular prodding from reporters” should be understood in an ideological context. Overall, far-reaching progressive proposals like Medicare for All have received negative coverage from corporate media. Yet during debates, Sanders and Warren have been an effective tag team while defending such proposals. The media establishment would love to see Sanders and Warren clashing instead of cooperating.

For progressives, the need for a Sanders-Warren united front is crucial. Yes, there are some significant differences between the two candidates, especially on foreign policy (which is one of the reasons that I actively support Sanders). Those differences should be aired in the open, while maintaining a tactical alliance.

It would be a serious error for progressives to buy into corporate media portrayals of the Sanders and Warren campaigns as destined to play a traditional zero-sum political game. The chances are high that by the time the primaries end this spring, Sanders and Warren—as well as their supporters—will need to join forces so one of them can become the nominee at the Democratic National Convention in mid-July.

In the meantime, during the next few months, top corporate Democrats certainly hope to see a lot more headlines like one that greeted New York Times readers Monday morning: “Elizabeth Warren Says Bernie Sanders Sent Volunteers ‘Out to Trash Me’.”

Keeping eyes on the prize this year will require a united front that can strengthen progressive forces, prevent any corporate Democrat from winning the party’s presidential nomination, and then go on to defeat Donald Trump.