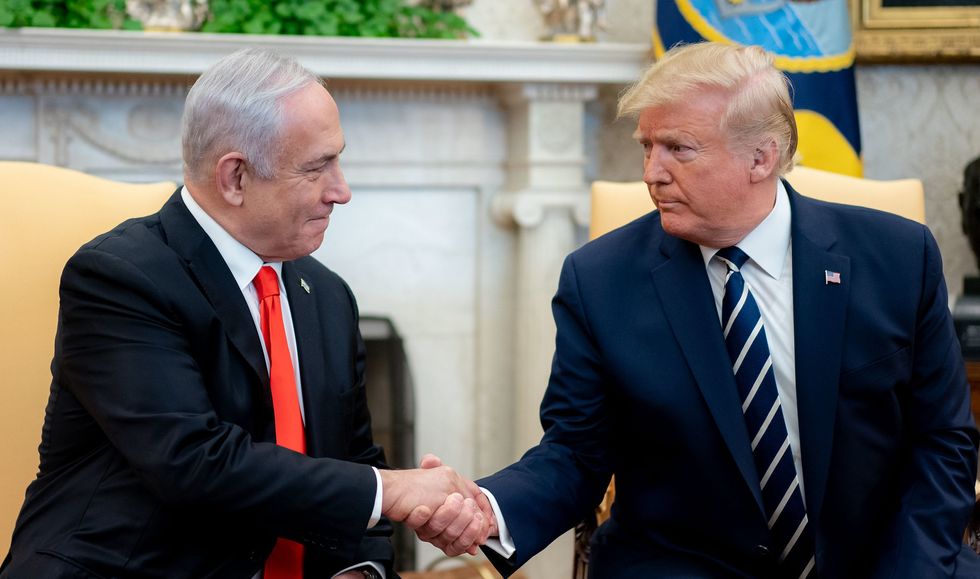 As the International Criminal Court moved forward this week with its investigation into alleged war crimes committed against Palestinians in the Occupied Territories, the White House's new so-called "peace" plan includes a largely unreported provision that would end such efforts to hold the Israeli government to account.

The document, released Tuesday, was widely criticized as a "screw the Palestinians over harder non-peace plan" that lets Israel continue its illegal occupation and a "ludicrous" proposal that offers no path towards Palestinian statehood.

The plan's architect, President Donald Trump's son-in-law and White House advisor Jared Kushner, suggested Palestinians "take a cold shower" and accept it lest they "screw up," he said, like with "every other opportunity that they've ever had in their existence."

A portion of the document states that "the parties should conduct themselves in a manner that comports with this vision, and in a way that prepares their respective peoples for peace." For the Palestinians, that means victims of war crimes should keep quiet.

The plan states, in part, that Palestinians must take "no action, and shall dismiss all pending actions, against the State of Israel, the United States, and any of their citizens before the International Criminal Court" and other tribunals.

"A just and sustainable peace requires a plan that prioritizes the human rights of Palestinians and Israelis, and must include justice and reparation for victims of war crimes and other grave violations. This plan not only fails this fundamental test; it seeks to torpedo efforts towards justice for both Palestinians and Israelis that are currently under way," said Philip Luther, the organization's Middle East and North Africa research and advocacy director.

Netanyahu, who was indicted Tuesday on corruption charges and stood alongside Trump as he released the plan, reiterated his condemnation of the ICC this week.

In an interview set to air Thursday with Christian network TBN, he called on global powers to sanction the court over the probe.

"The U.S. government, under President Trump, has spoken forcefully against the ICC for this travesty, and I urge all your viewers to do the same. To ask for concrete actions, sanction against the international court, its officials, prosecutors, everyone," he said, according to an excerpt of the interview released by the Israeli government.

The internation court, he continued, is "basically in a full-frontal attack on the democracies, both on the democracies' right to defend themselves, and on Israel's right, the Jewish people's right, to live in their ancestral homeland, the Land of Israel."

Michael Lynk, the U.N. special rapporteur for the situation of human rights in the Palestinian territory occupied since 1967, has a different perspective. In December, Lynk praised the possibility of justice the investigation could bring.

"Over the years, the international community has adopted hundreds of resolutions through the United Nations condemning various features of Israel's entrenched occupation of the Palestinian territory. Yet rarely has it ever combined criticism with consequences for Israel," he said. "Now, the possibility of accountability is finally on the horizon."

Trump has bristled at the possibility of the probe into alleged Israeli wrongdoing as well.

In a statement last April celebrating his administration's successful intimidation campaign to stop an ICC investigation into alleged war crimes the U.S. committed in Afghanistan, Trump said, "Any attempt to target American, Israeli, or allied personnel for prosecution will be met with a swift and vigorous response."

Despite U.S. and Israeli objections to the ICC probe into war crimes in the West Bank and Gaza, the effort—at least at this point—continues to advance.

The ICC announced Tuesday that it set a March 16 deadline for Israel, Palestine, and alleged victims to submit documents to the court.

ICC chief prosecutor Fatou Bensouda said in December that "there is a reasonable basis to proceed with an investigation into the situation in Palestine" as she was "satisfied that war crimes have been or are being committed in the West Bank, including East Jerusalem, and the Gaza Strip," and "there are no substantial reasons to believe that an investigation would not serve the interests of justice."