'Apologia for authoritarianism': Legal analysts slam Trump lawyer for arguing president can do whatever he wants to boost reelection chances 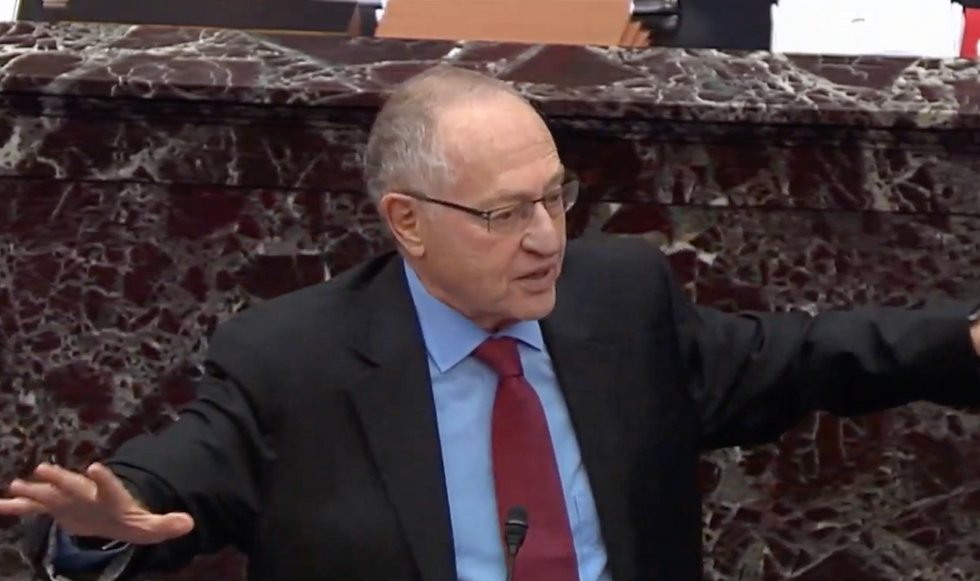 Lawmakers and legal analysts observing President Donald Trump's ongoing Senate trial voiced alarm at a brazen and sweeping line of defense offered Wednesday by Trump attorney Alan Dershowitz: "If a president does something which he believes will help him get elected in the public interest, that cannot be the kind of quid pro quo that results in impeachment."

Dershowitz's argument during a Senate question-and-answer session reverberated across Capitol Hill and social media, sparking warnings that—if accepted—Trump or any other president would be free to do whatever they please as long as they can claim they were acting to advance their chances of reelection.

"This of course would mean that a president could not be impeached for doing literally anything in the service of his own reelection," tweeted Cornell Law professor Josh Chafetz.

One observer described Dershowitz's claim as an "apologia for authoritarianism," and another remarked: "I'm not sure even kings had such powers."

Rep. Adam Schiff (D-Calif.), the lead House impeachment manager and chairman of the Intelligence Committee, said Dershowitz's defense suggests presidents have free rein to cheat in elections to boost their hopes of victory.

"If you say you can't hold a president accountable in an election year where they're trying to cheat in that election," said Schiff, "then you are giving them carte blanche."

During his #impeachment trial, President Trump’s legal team argued that if a politician believes his reelection is… https://t.co/Jnco63TPe2
— Reuters (@Reuters)1580347800.0

Dershowitz's assertion Wednesday represented the most extreme version of the shift among the president's defenders from "arguing Trump shouldn't be removed from office because he didn't do what witnesses and Democrats have accused him of" to "arguing that he shouldn't be removed because he has the right to do basically anything he likes, as long as it doesn't violate a specific criminal statute," noted HuffPost's Ryan Reilly and Arthur Delaney.

Democratic senators who witnessed Dershowitz's argument were startled by the implications of his latest defense of Trump's efforts to pressure Ukraine to launch investigations into his Democratic political rivals.

"They are saying that abuses of power in order to get reelected could be considered in the national interest and therefore not impeachable," tweeted Sen. Brian Schatz (D-Hawaii). "If that doesn't worry you I just don't know what to say."

"It's all out in the open now," said Murphy. "The president's counsel just argued that there is nothing wrong with any candidate for office soliciting dirt on their opponents from foreign countries. They're not even trying to fake it anymore."

The President’s new argument today, that anything he does to benefit his re-election, no matter how corrupt, is uni… https://t.co/FOCjYmuECJ
— Chris Murphy (@Chris Murphy)1580331653.0

As Dershowitz put forth his "extremist view of executive power" in the Senate chamber Wednesday, thousands of activists rallied at the U.S. Capitol building to demand that witnesses be called to testify in Trump's impeachment trial. A Senate vote on whether to allow witnesses is expected Friday.

According to consumer advocacy group Public Citizen, which helped organize Wednesday's demonstration, nearly 50 activists were arrested on the steps of the Capitol building as they demanded an end to the GOP's attempt to block witnesses and additional material evidence.

"By overwhelming margins, the American people support the commonsense notion that the U.S. Senate should hear from the fact witnesses who can shed light on President Trump's utterly implausible claim of innocent intent in withholding aid from Ukraine," Robert Weissman, president of Public Citizen, said in a statement. "Now it's on the Senate to refuse complicity in Trump's attempted cover-up."