'A descent into constitutional madness': How Trump's impeachment defense pushes the US legal system to its breaking point 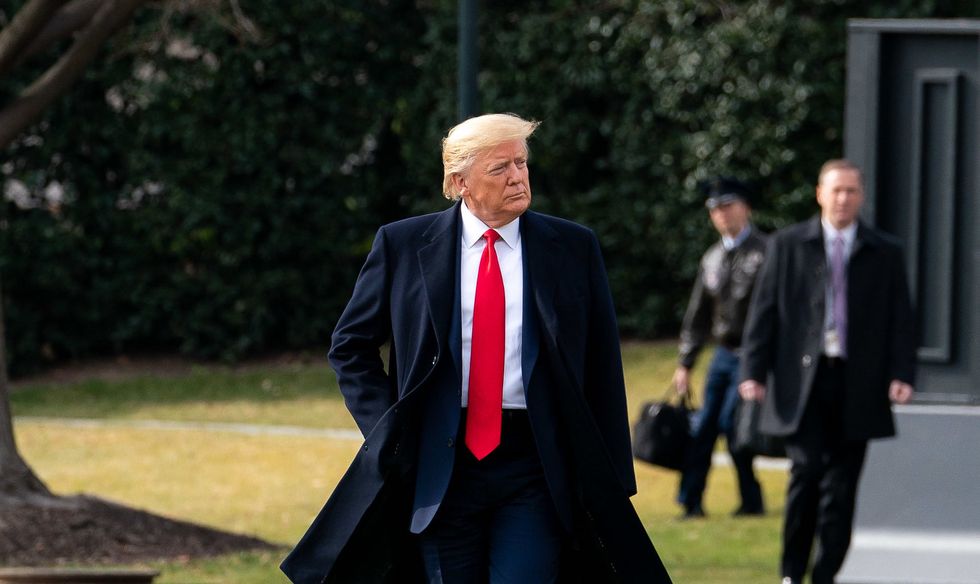 President Donald J. Trump walks across the South Lawn of the White House to board Marine One Thursday, Jan. 30, 2020, to begin his trip to Michigan and Iowa. (Official White House Photo by Tia Dufour)
Cody Fenwick
January 30, 2020

Because President Donald Trump refuses to concede any ground in the debate over the Ukraine scandal, his attorneys have been forced to push a slew of diverging arguments in his defense to cover all possible avenues of attack.

But the result of Trump and his administration's myriad defenses is to construct a mangled legal and constitutional framework in which the president is exempt from almost any oversight at all.

As House impeachment manager Adam Schiff (D-CA) said on Thursday of the ongoing Senate trial: “What we have seen over the last couple days is a descent into constitutional madness."

Most prominent of those pushing this descent is Alan Dershowitz, whose stint as a lawyer for the president is haunted by his own personal and professional baggage.  Arguing for acquittal, Dershowitz has touted the extreme and marginal view that presidents can only be impeached for crimes or "crime-like" behavior and that "abuse of power" itself is not impeachable. The view has been widely debunked on historical, legal and common sense grounds — and some argue that it doesn't even help Trump because the House's articles do implicate him in criminal activity.

But taking his view at face value, it implies that presidents can get away with truly extreme behavior. On Wednesday, Dershowitz introduced a new spin on his argument by saying that even if Trump explicitly tried to get Ukraine to target his political opponent to help him win in 2020, this wouldn't be impeachable because the president believed his own re-election was in the national interest.

This claim leads to absurd conclusions and would give the president extraordinary powers. It would suggest, for instance, that if President Richard Nixon had pardoned the Watergate burglars to cover up their crime and its ties to his campaign, Congress couldn't have impeached him over it. Trump could fire all black officials under his direct supervision, have the Justice Department announce criminal investigations of all leading Democrats, demand the IRS end all audits of Republicans, or have the service stop collecting taxes from his donors. All of this would be within his authority as president, and not technically criminal, so, on Dershowitz's, Congress would be powerless to stop it.

These ideas might seem absurd, but what a future president might try to get away with is unknowable. And if Dershowitz's view is accepted as setting precedent, presidents will be unbound. Indeed, there'll be nothing to stop Trump himself from continuing to try to launch criminal probes of his political opponents the day after the Senate trial ends.

Some have said that Dershowitz's view means a president can do anything, and it's not impeachable. But this isn't quite right. His view is essentially that the president's powers are essentially unreviewable; whatever he does with them can't result in impeachment. He could still be impeached, in Dershowitz's view, for patently criminal acts like murder, theft or bribery (at least if the bribery is clearly for his personal gain — though Dershowitz says, absurdly, that we should avoid inquiring about a president's potentially corrupt motives).

But even in these cases, the views of Trump's lawyers severely limit the scope of the president's accountability.

It's widely known that the Justice Department holds that presidents can't be indicted while in office. But under Trump, the department has taken that position even further, arguing that local prosecutors can't use traditional investigative steps against the president such as grand juries and subpoenas.

And when Special Counsel Robert Mueller finished the Russia investigation, he concluded that he couldn't determine whether Trump committed criminal obstruction of justice because it would be unfair to make such an announcement without charging someone. He said, though, that Congress could use its impeachment powers to hold the president accountable.

When Congress has tried to investigate the president on other matters, however, Trump has completely stonewalled and denied the legitimacy of the investigations. He went to court saying Congress couldn't investigate his finances, a view that will be tested before the Supreme Court.

So anyone who wants to criminally investigate a president is severely constrained on the Trump team's legal view. And if Congress wants to investigate the president, it must first decide that it's conducting an impeachment inquiry — an inquiry that must essentially find a crime to be legitimate — before it has taken any major investigatory steps. And even as the House pursued its impeachment inquiry of the Ukraine matter, Trump's lawyers cried foul at every step, virtually claiming that the process was out of bounds unless the president himself dictated every step. For example, they say the impeachment proceedings must be "bipartisan" to be legitimate — meaning dissension from the president's party can shortcircuit the whole process.

The totality of all the arguments various Trump lawyers have offered is that the only way to hold Trump accountable is if Congress catches clearly committing an unambiguous crime and opens an impeachment inquiry immediately in a bipartisan way. Only in this shockingly narrow set of circumstances, it seems, does the Trump team agree that impeachment could be justified. The goal, of course, is to put Trump as high above any check on his power as possible. And so far, it seems to be working.