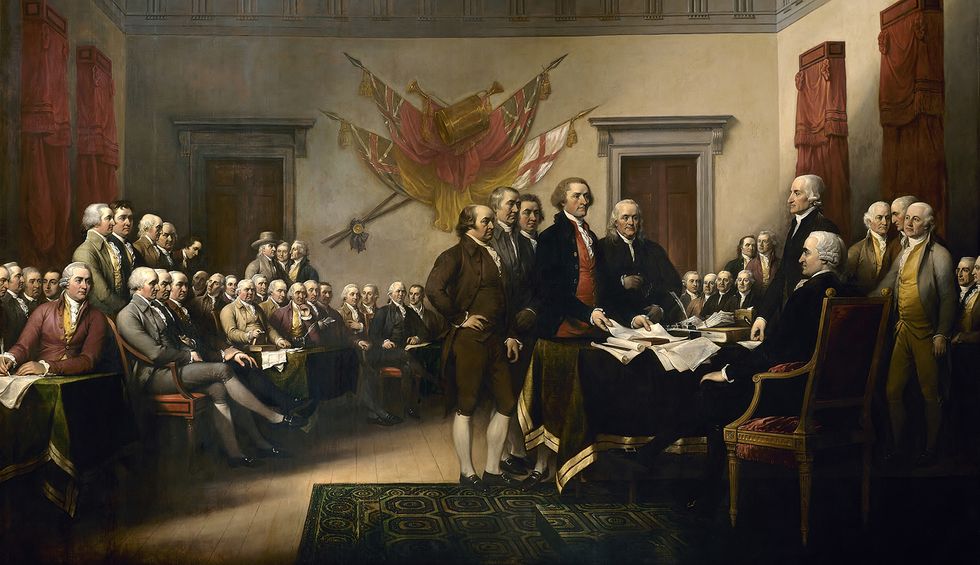 In his first draft of Declaration of Independence, Jefferson listed a “long train of abuses & usurpations,” at the hand of King George III. Those, he added, are “begun at a distinguished period, & pursuing invariably the same object.” Those abuses are indicative of “arbitrary power,” and it is the right, even duty, of those abused to throw off such discretionary abuse of authority and establish such government, by consent of the people, in accordance of the will of the people.

One passage—by far the longest and intentionally placed, for effect, after all other complaints—was a gripe about George III’s role in the North American slave trade, and it was excised by members of the Congress, because the issue of slavery was a divisive issue and the time was not right for debate on it. Yet it is still of importance to scholars of Jefferson because it tells us much of his thinking on slavery at the time of composition of the Declaration. It also contains a heretofore undisclosed argument, implicit, on George III’s hypocrisy apropos of slavery, and that argument has implications for the hypocrisy of the colonists.

The abuses Jefferson limns in his draft of the Declaration are many, at least 25—some complaints he lists are compound claims—and he lists last and devotes the most ink to introduction of slavery into the colonies.

he has waged cruel war against human nature itself, violating it’s most sacred rights of life & liberty in the persons of a distant people who never offended him, captivating & carrying them into slavery in another hemisphere, or to incur miserable death in their transportation thither. this piratical warfare, the opprobrium of infidel powers, is the warfare of the Christian king of Great Britain, determined to keep open a market where MEN should be bought & sold, he has prostituted his negative for suppressing every legislative attempt to prohibit or to restrain this execrable commerce: and that this assemblage of horrors might want no fact of distinguished die, he is now exciting those very people to rise in arms among us, and to purchase that liberty of which he has deprived them, & murdering the people upon whom he also obtruded them; thus paying off former crimes committed against the liberties of one people, with crimes which he urges them to commit against the lives of another.

First, there is Jefferson’s use of capital letters for the word men. Nowhere else in his draft does he do use capitals. That shows philosophically and unequivocally that Jefferson considered Blacks as men, not as chattel, and that argues decisively against the naïve view, articulated by many in the secondary literature, that the Declaration was not meant to include Blacks. Blacks, qua men, are deserving of the same axial rights as all other men.

Second, Jefferson accused the king of Tartuffery of religious hypocrisy. George III is a “Christian king,” yet he is guilty of “piratical warfare”: taking people, who have done nothing to offend him, and conveying them like cattle to America. The king, of course, did not introduce slavery to America, and Jefferson is not accusing George of that. That occurred in 1619, when Dutch merchants brought 20 Africans, perhaps indentured servants, to Jamestown, Virginia. Those who settled in America eventually found Africans to be a cheaper and more abundant labor source than other indentured servants, mostly penurious Europeans, and so the practice continued. Yet the king, Jefferson asserts, has “prostituted his negative”—that is, he has availed himself of none of presumably numerous legislative opportunities for nullifying or even minifying slave trading. George III could have put an end to the transplantation of Africans, but he did not.

Third and most importantly for this essay, there is a layered argument in Jefferson’s draft of the Declaration of Independence that has hitherto gone unnoticed by scholars. George III has been implicitly sanctioning the opprobrious institution, which strips men of their God-given rights and makes commercial gains of them without their sanction of will, by refusal to stop the slave trade by use of his negative. While colonists make slaves of the Blacks brought to the colonies, King George, through abuses and usurpations, makes slaves of his colonial subjects. Thus, there are two levels of slaves: colonists, who are not deserving of the same rights and treatments of other British citizens perhaps because of their transplantation, and transplanted Blacks, who are the property of the colonists or the slaves of the Colonial “slaves.”

Is that itself significant?

It is difficult to say. Jefferson might have in mind two notions. One, introduction of slavery is a means of keeping colonists preoccupied with slaves, so that they will not see that George is making slaves of them. Second, getting colonists inured to the institution of slavery—to men of one kind treating men of another kind as inferiors—will make them somewhat less uncomfortable with being treated as slaves—viz., as men without rights. Such notions, however, are mere speculations.

In giving birth to the layered argument in the passage and in underscoring the king’s Tartuffery, Jefferson must have often reflected on the hypocrisy of colonists, who had taken in the transported Blacks and accepted them as slaves. That the king might be responsible for the transplantation of slaves to the continent does not exculpate colonists for continuing enslavement.  A person, knowing certain goods to be stolen and accepting them as a gift, is equally guilty and deserving of inculpation as the stealer.

Finally, the undue length and the placement of the passage in Jefferson’s first draft are revelatory. There are 168 words in the passage. No other grievance comes near to it in length. That argues for the strength of Jefferson’s conviction that slavery is opprobrious. Moreover, that Jefferson positions the lengthy grievance in the last place is indicative that he considers the grievance to be his coup de grace.

Those things noted, there is something strained in the passage. Carl Becker in his The Declaration of Independence writes: “The passage is clear, precise, carefully balanced. It employs the most tremendous words—‘murder,’ ‘piratical warfare,’ ‘prostituted,’ and ‘miserable death.’ But in spite of every effort, the passage somehow leaves us cold.” It is “calm and quiescent,” lacking in warmth, and fails to move us. Readers get a sense of “labored effort”—that is, of “deliberate striving for an effect that does not come.”

Becker is right but fails to recognize the reason: the hypocrisy of the colonists, Jefferson included. He blames the king of sanctioning slavery by not stopping the exportation of slaves to America, but he nowise addresses the issue of the colonists, freed Blacks among them, putting transmigrated Blacks to work as slaves. The guilt here must be shared.

Jefferson’s anti-slavery passage, we know, was excised by Congress, and so it did not appear in the Declaration of Independence. The reason was certainly that slavery, widely practiced in the South, was a divisive issue and the Declaration of Independence was to be a pronouncement about which all states would be in agreement. Inclusion of the lengthy grievance, Jefferson should have seen, would have been reason for large dissention among members of Congress that would have led to unneeded controversion. The moment was kairotic and dissention needed to be avoided at all costs.

Jefferson expressed contempt that the excised passage was not included in the final draft. He said in notes on the Continental Congress: “the clause…, reprobating the enslaving the inhabitants of Africa, was struck out in complaisance to South Carolina & Georgia, who had never attempted to restrain the importation of slaves, and who on the contrary still wished to continue it. our Northern brethren also I believe felt a little tender under those censures; for tho’ their people have very few slaves themselves yet they had been pretty considerable carriers of them to others.”

His hypocrisy aside, Jefferson is to be lauded for articulating his anti-slavery views in his draft of the document, even if the paragraph was axed. By doing so, he was sticking out his neck, so to speak, by placing himself at odds with most others from the South, his own state especially, on slavery. The passage did reach the hands of others in the Congress and Jefferson’s opposition to slavery became widely known by members. In that regard, the excised passage was not then without effect and ought not now to be without effect. Yet today’s scholars often conveniently overlook the risk Jefferson was taking in crafting that passage.

M. Andrew Holowchak, Ph.D., is a philosopher and historian, editor of "The Journal of Thomas Jefferson's Life and Times," and author/editor of 14 books and nearly 100 published essays on Thomas Jefferson. He can be reached through www.mholowchak.com.