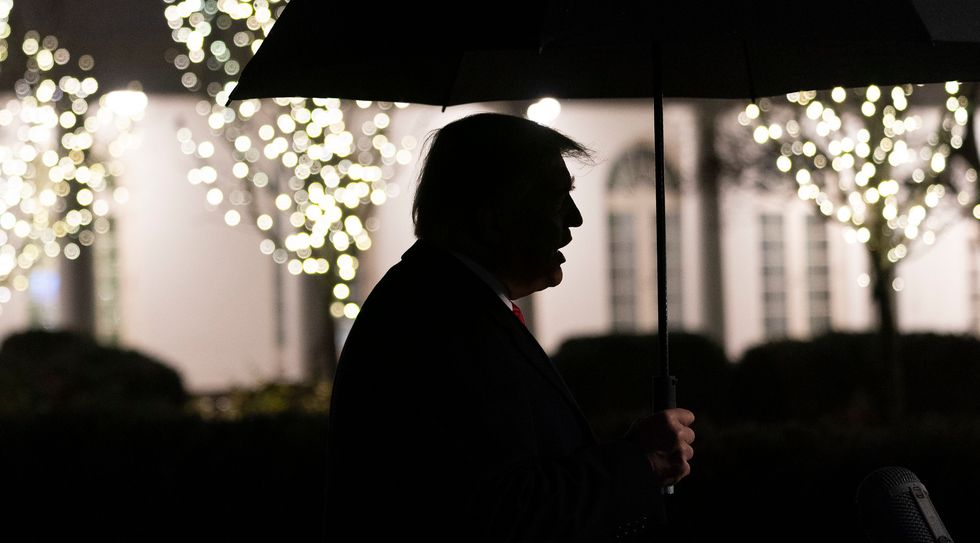 President Donald J. Trump is seen in silhouette holding an umbrella as he talks to members of the press on the South Lawn of the White House Tuesday, Dec. 10, 2019, prior to boarding Marine One to begin his trip to Hershey, Pa. (Official White House Photo by Joyce N. Boghosian)
Common Dreams
December 12, 2019 Election '20

Let’s think positive. I want to think good thoughts about the future.

Say, then, that the ideological purists of the centrist death cult lose the Democratic primary. A progressive presidential candidate and bold agenda draw millions of first-time and lapsed voters to the polls (this post isn’t about who that candidate would be). Democrats retake the White House and both houses of Congress with a huge popular mandate for progressive restructuring of society.

(Anything less, and you keep most of Trumpism: don’t kid yourself about this.)

(Anything less, and the future is no less dark than it presently is, since keeping Trumpism and installing a new head of state to oversee it gets you most of the same bad results for four years, and plenty of motion toward new bad results.)

Think about it, now. Right this moment, you have hundreds—thousands, maybe tens of thousands—of government officials at all levels who have actively and/or publicly asserted, in their support of and complicity with Trump’s refusal to engage with a wide range of democratic checks and balances and institutions and so on, that they prefer Trumpism to an even thinly procedural, democratic “rule of law” based on constitutional principles.

You have, in short, a multi-year constitutional crisis. This consists in part of people asking each other, every five minutes or so, whether perhaps now what is happening is a constitutional crisis (most recently, with various Trump officials hewing to his administration’s stance that employees in the executive branch are, somehow, not required to comply with the constitutionally defined impeachment process).

In the wake of a long-term constitutional crisis in which large segments of the bureaucratic class are implicated, something like denazification will be necessary.

You can’t do it very readily with the elected officials, of course. People like Mitch McConnell and Lindsey Graham represent constituencies who themselves don’t believe in or particularly want to maintain institutions or work toward democracy. Both are heavily favored to win Senate reelection bids in 2020. There’s no real way around the fact that somewhere in the neighborhood of a third of Americans just do not give a shit about basic institutional norms (they like the word “Constitution,” obviously, but have zero interest in what’s in there except for the Second Amendment).

There’s a problem with the demos itself.

The bottom line there is that we need—as we have always needed—to become a more democratic demos. The fact that, as a populace, we’re only sort of committed to democracy in any strong sense is ugly and shitty, and more in-your-face than usual right now (especially if you are white and pretty privileged and hadn’t already noticed that a good portion of the demos is not much interested in democratic growth), but it’s not especially new (even if neoliberalism has made everything worse on this front).

Detrumpification isn’t about the demos, though.

It’s about government employees and contractors, from bureaucrats to soldiers to Capitol Hill staffers.

What is new, or new-old, or old but new again, or evergreen (think of anti-Reconstruction, or of all the staffers of the segregationists Joe Biden so proudly worked across the aisle with for so long, each of whom went on to their next roles unapologetically), is the extent to which not only elected but also appointed officials at all levels of government and civil society have more or less publicly announced themselves completely indifferent to basic institutional norms.

Somehow, vast swathes of government have to be detrumpified.

If the United States is to ever begin again with democratizing, and if it is correct to think of Trumpism as antidemocratic at every level (as William Connolly writes, Trump is an aspirational fascist, and his administration’s response to impeachment has borne that moniker out as much as anything), then Trump the man and Trumpism the smorgasbord of erratically terrible policy are not all that must be overcome.

Detrumpification will mean democratic rehabilitation of some public servants and removal of others. By definition, this has to be a large-scale, far-reaching process. Thus far, the need for such a process has not been much broached.

To the contrary, you have people like Trump press secretary (and font of antisemitism) Sean Spicer and Trump campaign manager (and co-conspirator) Corey Lewandowski out teaching students at Harvard’s Kennedy School and dancing with the stars (at least briefly). Or, you have concerned centrists clucking about whether it is right or okay to call Sarah Huckabee Sanders a “liar,” since she really does not want to be called that, even though she routinely and boldfacedly lied about everything Trump asked her to in her capacity as press secretary. These are people whose activity on behalf of the vast criminal conspiracy that is the Trump administration was consistently and fundamentally opposed to the maintenance of even very basic sorts of democratic norms. And what of all these career officers in the DOJ or DHHS and so forth, who have cast their lot with aspirational fascism?

Do you think that when Trump leaves office—we should be so lucky!—they will magically commit themselves to democratic norms, to a constitutional order they’ve flouted and disregarded at every turn? Why would they?!

So, what would make detrumpification possible?

Anything less than an overwhelming popular mandate for progressive, fundamental restructuring of the institutions of society along democratic lines will be insufficient to even begin the process of detrumpification.

Can you imagine? You think you’ve got militia problems now!

Just wait until a Joe Biden figure announces, after scraping out a solid win by 6% in the electoral college and retaining control of the House for Democrats by a thin margin but losing the Senate because (to the surprise of no one paying attention, since this is literally the point of gerrymandering) “safe” districts don’t flip when the party they’re constructed to exclude wins over a few independents, announces that now is the time to begin a new era. There are two options then.

Option one: the new era is complete bullshit because it leaves most anti-democratic, constitution-flouting bureaucrats in place or makes new places for them, except maybe two or three who serve as scapegoats and thus focalizers for years of fruitless symbolic wrangling in Congress.

Option two: your Joe Biden figure faces armed rebellion by “patriots” who believe in neither democracy nor constitution (though they do love the words—almost as much as they love the idea of a new civil war), with no popular mandate to guide or legitimate his response.

You have to bet on a broad popular mandate in this election.

You can’t afford not to. Playing it “safe” is losing, and not just because centrism is (witness the centrist Obama years’ radical erosion of Democrats’ ability to participate in governance) far from being a safe bet in the first place.

Playing it “safe” is losing now because what Democrats win with anything but a broad popular mandate would be a loss. Only a huge win in 2020 will make detrumpification possible. And only detrumpification reopens the door for American democratization. If you want a chance at detrumpification, if you care about the possibility of democracy, you can’t afford to place your bet anywhere but on the candidate who gives you the best odds of increasing voter participation enough to secure a real popular mandate. Every realistic person knows well enough who that is.

It turns out this was a post about the Democratic primary, after all, though I didn’t quite mean for it to be. What can I say? I guess I’m a pragmatist.