Watch: Devin Nunes claims he was 'stalked' after reporter asked basic questions about his role in Trump's Ukraine scheme 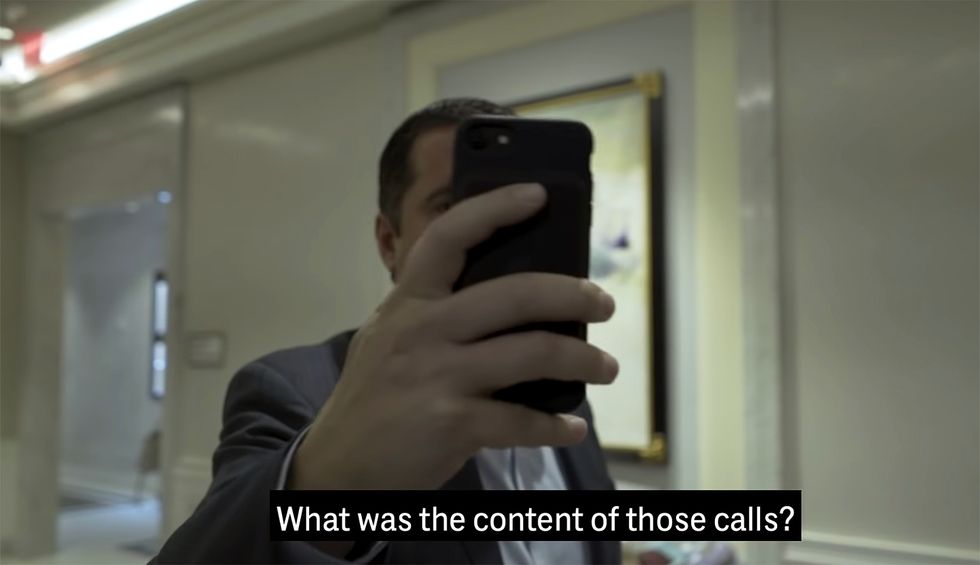 Rep. Devin Nunes, the top Republican on the House Intelligence Committee, claimed Sunday that he was "stalked" at a $15,000-per-plate GOP fundraiser at the luxury Lotte New York Palace Hotel in Manhattan.

In reality, Nunes was approached at the GOP event Saturday by The Intercept's Lee Fang, who asked basic questions about the California Republican's role in President Donald Trump's efforts to pressure the Ukrainian government to investigate former Vice President Joe Biden's son, Hunter.

"Hey, Congressman Nunes. I just wanted to ask you really quickly: What were your calls with Lev Parnas about?" Fang said, referring to an indicted associate of Trump's personal attorney Rudy Giuliani. "Were you asking about the effort to investigate Hunter Biden?"

Nunes walked away without responding to the questions.

When Fang approached Nunes a second time, the congressman pulled out his cell phone and appeared to take photos of Fang and The Intercept's cameraman.

Fang identified himself as a reporter from The Intercept and asked once again about the contents of his conversations with Parnas, which were disclosed for the first time last week in call records released by Democrats on the House Intelligence Committee.

"Were you part of this effort to pressure the Ukrainian government to investigate Hunter Biden?" Fang asked. Nunes once again walked away without responding to the questions.

Sunday afternoon, Nunes posted a photo of Fang on Twitter and claimed the reporter "stalked" him at the GOP fundraiser.

"Maybe he was in Vienna with CNN," Nunes wrote, apparently referring to a CNN report that the California Republican traveled to Vienna last year to meet with a former Ukrainian prosecutor to discuss the effort to dig up dirt on Biden. Last Tuesday, Nunes filed a lawsuit seeking $435,350,000 in damages from CNN for publishing the story.

This guy stalked me in hotel lobby after my appearance on ⁦@foxandfriends⁩ Saturday AM maybe he was in Vienna with… https://t.co/vpXUVhQobG
— Devin Nunes (@Devin Nunes) 1575836487.0

Fang was quick to respond to Nunes, calling the congressman's description of the event "weird" and "defamatory."

"I walked up calmly and asked a simple news question to the congressman," Fang tweeted. "You can see everything I actually said and Nunes' trembling hand while he silently took my picture in the video I posted."

"This was an event with many, many members of the House Republican caucus. Several lawmakers spoke to us as they arrived or left the hotel for the NRCC fundraiser upstairs. No one was 'stalked,'" Fang added. "Shortly after this brief interaction with Nunes, he had a Capitol Police officer stationed at the event ask hotel staff for us to leave the hotel, which we obliged without hesitation. The man with the beard seen next to Nunes then left the hotel and followed us around the block."

As Fang and Paul Abowd reported for The Intercept Sunday, "Nunes has struggled to explain his rationale for concealing his communications with the men involved in the alleged pressure campaign in Ukraine at the height of their effort, which reportedly included a bid to withhold military assistance and the firing of an ambassador viewed as an obstacle to the strategy."

In addition to his conversations with Parnas, call records released by the House Intelligence Committee showed Nunes also spoke with Giuliani in April.

Notable in this report is the phone records obtained by the committee, which show, among other things, Giuliani con… https://t.co/ehDTJs7QO0
— Jeremy Herb (@Jeremy Herb) 1575403006.0

Nunes was widely ridiculed for claiming he was "stalked" after being confronted with basic questions about his role in Trump's Ukraine scheme, which is at the heart of the House impeachment probe against the president.

"This video depicts a journalist politely asking reasonable questions of Devin Nunes about his flagrantly corrupt conduct," tweeted Greg Sargent of the Washington Post. "Based on this video, Nunes' depiction is an outrageous smear. Nunes is out of control. He's a public servant. He's functioning as Trump's servant."