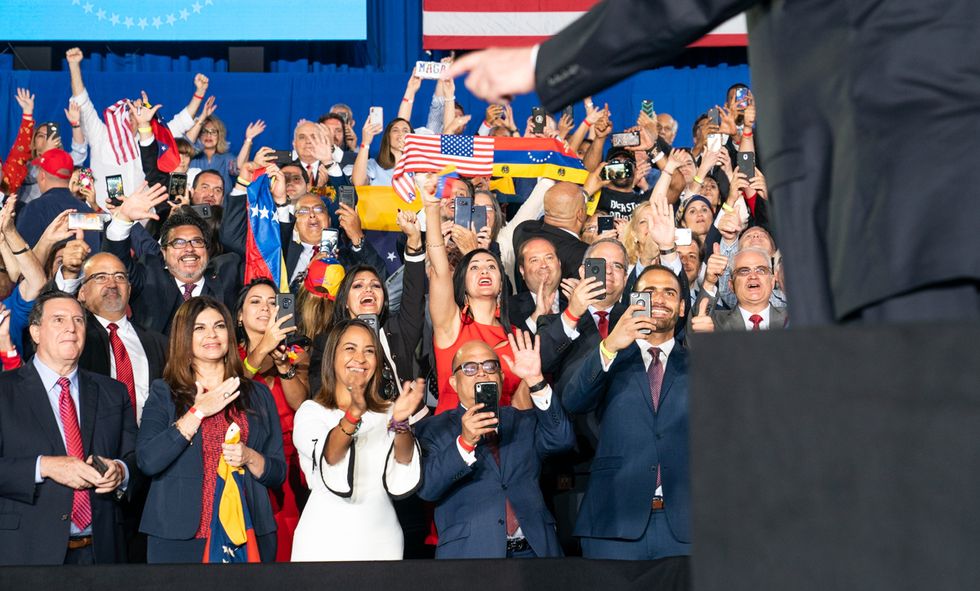 The most fanatical right-wing followers of Donald Trump have been warning for some time that any attempt to impeach the man in the Oval Office would result in a second American civil war that will produce large amounts of bloodshed as they rise up with their weapons caches and begin murdering liberals.

Now that he actually has been impeached, they’re going even more ballistic.

Rep. Louie Gohmert—who has talked up civil war on several previous occasions—went ballistic on the floor of the House last week, warning that impeachment meant the end of America: “This is a travesty. We’re in big trouble,” Gohmert huffed, adding, “Now it’s lowered even further, the bar. [Impeachment] will be used for political battles and this country’s end is now in sight. I hope I don’t live to see it. This is an outrage.”

Louisiana Congressman Clay Higgins was even more unhinged in his similar rant last week: “They fear the true will of we the people. They are deep established D.C. They fear, they call this Republican map flyover country. They call us deplorables. They fear our faith, they fear our strength, they fear our unity, they fear our vote, and they fear our president. We will never surrender our nation to career establishment D.C. politicians and bureaucrats. Our republic shall survive this threat from within. American patriots shall prevail.”

The real action, however, has been on social media, where Facebook and Twitter posts eagerly anticipating the violent uprising to preserve Trump’s presidency have been as common as dirt.

Ex-Navy SEAL Jonathan Gilliam, for instance, used Gohmert’s comments as a springboard on Twitter for open discussion of a shooting civil war in which conservatives begin killing liberals for attempting to remove Trump: “Like so many, I see exactly what he sees. Therefor [sic] it is time we begin considering the possibility of civil war.”

“I am counting down the days until the vigilantes take to the streets. I dread the inevitable conflict that is coming but will do whatever I can I can to support the fight against the Left,” one commenter replied. Another answered: “lol it would be a short Civil War II.  The vast majority of the peace officers, military personnel, and gritty hard-working 2nd Amendment loving Americans are on our side.  The snowflakes have no idea about the sleeping bear they are about to awaken.”

A fairly typical response among far-right extremists has been to pledge utter fealty to Trump, even unto death. Rene Hollan, a Monroe, Wash., man who is a regular participant in events organized by Patriot Prayer and the Proud Boys in the Pacific Northwest, posted a screed (later removed by Facebook) vowing that he would even detonate a nuclear bomb in a major liberal city:

As a naturalized U.S. citizen who swore the Oath of Allegiance, if President Trump orders me to drive a truck with a nuke into a city with Facebook offices or an illegal sanctuary city, and detonate it, killing myself, everyone in the city, and rendering it a sheet of glass, it would be my honor to comply.

Another Northwest far-right figure, “documentarian” Brandon Farley—long a player in the Portland-area “patriot” scene—invited neo-Nazis to start killing his critics: “Hey Atomwaffen, will you please take note of this and act accordingly?” he tweeted.

A couple of days later, Farley discovered that his name came up in Twitter searches for Atomwaffen, and expressed his confusion.

Social scientist Caroline Orr collected a large cache of these kinds of comments on Twitter, noting, “It's easy to laugh at the keyboard warriors in the mix, but there are definitely extremists using this opportunity to try to bring about social and political upheaval by issuing calls for violence.”

“Lock N Load, PATRIOTS, the demonrats just told us what they want for Christmas: #CivilWar2,” wrote one. “Let’s make the demon rats live on the streets of their own districts!”

“ALERT!! If the Democrats impeach OUR PRESIDENT WE NEED TO HAVE A CIVIL WAR,” tweeted another. “America as we have known it will be gone and the squad will be in charge of us. I shiver thinking of it. A civil war will be the only way to get America back as we remember it.”

Of course, it’s always worth remembering that this talking point has been deliberately promoted by Russian intelligence agencies as part of their campaign to undermine American democracy. A Justice Department affidavit released in 2018 noted that the “civil war” meme is being directly encouraged by Internet Research Agency, the Russian-financed disinformation agency that purchased 3,500 ads on Facebook during the 2016 campaign with the intent of undermining American political consensus. The affidavit describes directions given to IRA’s writers.

Forcefully support Michael Savage's point of view with competence and honesty. Savage made it clear that any attempt to remove Trump is a direct path to a civil war in the United States. Name those who oppose the president and those who impede his efforts to implement his pre-election promises. Focus on the fact that the Anti-Trump Republicans: a) drag their feet with regard to financing the construction of the border wall; b) are not lowering taxes; c) slander Trump and harm his reputation (bring up McCain); d) do not want to cancel Obamacare; e) are not in a hurry to adopt laws that oppose the refugees coming from Middle Eastern countries entering this country. Summarize that in case Republicans will not stop acting as traitors, they will bring upon themselves forces of civil retribution during the 2018 elections.

Over at Trump-friendly Russia Today, op-ed writer Robert Bridge bolstered the civil war talk with a piece headlined “Democrats’ push to impeach Trump is just the latest chapter of US Civil War 2.0,” in which he concluded, “What is happening now in Washington DC between the Republicans and Democrats is just mere dress rehearsal for far more disasters down the road. I just hope the costumes don’t end up being blue and gray, once again.”