Trump runs the country just like his bankrupted businesses: The national debt is skyrocketing while economic growth lags behind 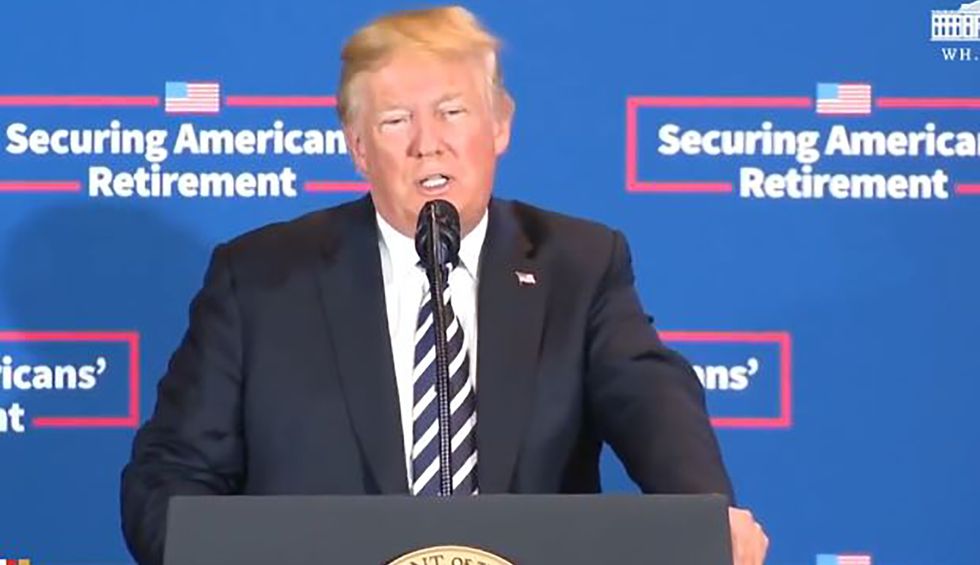 “How do you impeach a president who has created the greatest Economy in the history of our Country?” Donald Trump tweeted in September. Trump has repeatedly claimed big economic benefits from his presidency. And this claim undergirds a lot of Trump’s popular support.

But the truth is that Trump is a failure economically, both in his business career and in his actions as president. It is time to connect the dots of Trump’s economic failures—in a way that everyone understands.

A powerful way to communicate Trump’s true economic legacy is to brand him as “Bankrupter-in-Chief Trump.”  This is the real bottom line of Trump’s business career, and it is what he is actually doing to the country and to individual Americans. To drive home this message, “Bankrupter-in-Chief Trump” should be repeated after each new Trump claim, policy, action and report that illustrates this message—until most Americans understand this as Trump’s true legacy.

The country’s economic resources are being wasted, while its future economic health is endangered.

Trump campaigned on the promise of eliminating the federal debt within eight years, but what his economic policies have actually been doing is bankrupting the country.  The U.S. government’s budget deficit ballooned to almost $1 trillion in 2019, which is nearly a 50 percent increase during Trump’s time in office.

Trump’s overall contribution to the national debt, for the bills he has signed into law, is projected to top $4.1 trillion, according to the nonpartisan Committee for a Responsible Federal Budget. The largest portion of this increase is coming from Trump’s tax cuts for the wealthy and corporations, which are projected to boost the nation’s debt by $1.8 trillion, according to this group’s analysis.

Trump promised this his economic policies would lead to growth in the economy of between 3 and 4 percent per year, but the reality is that the economy has been growing at barely 2 percent over the past year. And the average economic growth since Trump took office has been a little more than 2.25 percent per year. The promised benefits from the massive tax cut have not materialized, and in fact the United States has now had two consecutive quarters of negative investment growth.

Not only are Trump’s tax cuts not boosting business investment as promised, but they are also bankrupting the country’s economic future. The nonpartisan Congressional Budget Office projects that deficits will remain massive each year going forward until the total federal government debt reaches nearly 100 percent of the country’s GDP (gross domestic product): “Under current law, the federal government is projected to borrow an additional $13.6 trillion from the end of 2018 through 2029, boosting debt held by the public to $29.3 trillion.”

The country’s ability to weather economic downturns has also been compromised because the tools of economic stimulus needed to pull the country out of a recession have already been squandered at a time when they were not needed. The country’s economic resources are being wasted with minimal benefit, while its future economic health is endangered.

Trump administration policies are leading to bankruptcy for large numbers of Americans. Farmers have been hit especially hard. Farm bankruptcies grew to the highest level since 2011, according to the American Farm Bureau Federation.

“Farm debt in 2019 is projected to be a record-high $416 billion,” the Farm Bureau reported in October, while farm income is 29 percent lower than in the record year of 2013.

And this is happening despite the Trump administration directing nearly $30 billion to farmers in bailout programs, which, along with other disaster aid and insurance indemnities, now accounts for nearly 40 percent of farmers’ income. And a lot of that aid has yet to actually reach farmers.

Trump promised that his tax cuts for the wealthy and for corporations would lead to more jobs and higher wages for all Americans. But here again, Trump has not delivered on his promises.

“From a purely economic standpoint, the Tax Cuts and Jobs Act of 2017 has been an enormous flop,” writes Michael Linden, executive director of the Groundwork Collaborative. Average U.S. job creation per month has actually declined in the nearly two years since the law passed. And wage growth has been only a small fraction of what the White House promised.

Not only have protections for individual Americans been stripped from regulations and policies, but enforcement of remaining laws and regulations has also plummeted.  The result, concludes Public Citizen, is that while Trump “once asserted that he was ‘not going to let Wall Street get away with murder,’ he now is allowing industry after industry to get away with just about anything.”  This, too, will cause bankruptcies for large numbers of individual Americans.

Trump also wants to take away access to health insurance for millions by undoing the Affordable Care Act. This would be especially damaging to those with pre-existing conditions, many of whom could not buy health insurance before that law took effect. And if Trump succeeds in undermining the Affordable Care Act, this would cause financial ruin to many more people, given that medical issues and costs are the number one reason Americans file for bankruptcy.

A Career of Business Bankruptcies

Trump cultivates a mythology that he has been tremendously successful in business. The reality is that public records show that six times Trump filed Chapter 11 bankruptcies for his companies. Yes, not once, not twice, but six times! And even in cases where Trump was able to avoid bankruptcy, there were many business failures. For example, “Trump defaulted on the debt of his airline, Trump Shuttle, turning it over to U.S. Airways.”

The full extent of Trump’s failures in business has been largely hidden by this refusal to release his tax returns. But The New York Times was able to obtain tax information from 1985 to 1994 and these records revealed $1.17 billion in business losses in these 10 years alone.

“In fact, year after year, Mr. Trump appears to have lost more money than nearly any other individual American taxpayer,” The Times concluded, comparing his losses to publicly available IRS information. These revelations led to newspaper and magazine headlines like this one: “As a Businessman, Trump Was the Biggest Loser of All.”

How was Trump able to stay in business despite many bankruptcies and losing so much money? The answer is that Trump was able to structure his deals so that he was losing other people’s money—that of banks, bond investors, governments and others—more than his own money.

Passing Losses to Others

In other words, Trump was passing financial losses to those who supported him. Not surprisingly, this led many banks and other financial institutions to stop providing financing to Trump.

The principal exception has been Deutsche Bank of Germany: “Over the past two decades, it was the only mainstream financial institution consistently willing to do business with Mr. Trump, who had a history of defaulting on loans. The bank lent him a total of more than $2 billion, about $350 million of which was outstanding when he was sworn in as president.”

This is the same bank that was fined $630 million in 2017 by American and British banking regulators in connection with “around $10 billion in suspicious trades being laundered out of Russia.”

It’s not just banks that have failed to receive payments due from Trump. Hundreds of small businesses, individual contractors, laborers and other ordinary Americans have alleged that Trump has not paid them.

Then there is Trump University, which Trump shut down after he settled two class-action lawsuits and a civil lawsuit accusing him of cheating thousands of Americans out of millions of dollars through what many called a “sham.”  Unfortunately, some of the 7,000 potential beneficiaries of the $25 million lawsuit settlement passed away before receiving any refund, such as Boyce Chair of Springfield, N.J., who lost $34,995 on so-called mentorship program tuition.

Steven Piersanti is a senior editor at Berrett-Koehler Publishers, a leading independent publisher of books that promote positive change at all levels—individual, organizational and societal. Before founding Berrett-Koehler in 1992, he was CEO of Jossey-Bass Publishers. He is seeking collaborators to expand and communicate themes of this article in various ways.